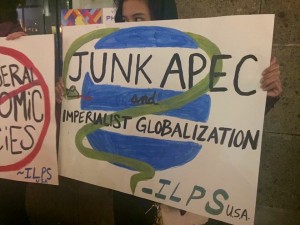 New York — On November 17, 2015, Filipinos and allies mobilized in front of the Philippine Consulate in New York to expose the real conditions and effects of the Asia-Pacific Economic Cooperation (APEC), a summit held in Manila this week, twenty years after the Philippines first hosted it in 1996 in Subic.

APEC is a forum that claims to promote economic cooperation among the countries of the vast Asia-Pacific region. It was founded in 1989 and now has 21 member-states which are home to nearly 3 billion people and account for 60 percent of the global economy.

APEC holds its Economic Leaders’ Meeting (ELM) every November, among other high-profile and low-profile meetings happening throughout the year, and includes participation from countries such as United States, Canada, and Mexico. The theme for APEC this year is “Building Inclusive Economies, Building A Better World”.

Steve Miles of the allied organization International Action Center said, “Every big bank on Wall St. was based on the slave trade, and it’s no different now in the 21st century. This APEC treaty is a slave treaty. Over 20 years ago, NAFTA (North American Free Trade Agreement) was passed. All it did was drive millions of Mexican people off their farms. What APEC is is a Pacific Ocean burgeon of NAFTA, and it’s even more deadly. APEC will not bring anything except misery to every worker, whether in New York or Manila. We oppose APEC because it’s an attack on workers.”

The National Alliance for Filipino Concerns also joined the action in solidarity to oppose APEC. Anne Beryl Naguit, NAFCON Vice President stated, “The Philippine government splurged on a budget of 10 billion Philippine pesos to host APEC and portray the illusion of progress. But instead of seeing genuine progress, we see more corruption and greed by the ruling landlords, elite businessmen, and politicians. The majority of the Filipino people continue to suffer landlessness and joblessness driving over 6000 Filipinos to leave the Philippines everyday, with many suffering from unfair labor practices, trafficking, slavery, discrimination, and criminalization. And when asked for protection or financial assistance for distressed migrant workers, the Philippine government would always say they do not have the funds, while they can spend much for APEC without even thinking twice.”

“The United States, through APEC, has aggressively pushed its agenda of neoliberal globalization into more than half of the globe. It pushed for trade and investment liberalization, deregulation, privatization, and denationalization, allowing private and foreign multi- and trans-national companies to take control of the economies of its poorer member states. In the Philippines, this prevented us from advancing national industrialization and genuine agrarian reform which could have had great potential for the country to be lifted off of poverty,” said Jenab-i Pareja, BAYAN USA North East Coordinator.

Cole Carothers, chairperson of Gabriela New York said, “The wealthy countries of APEC are feasting on the natural resources and human labor of other countries, wanting profit over people. A prime example would be the Labor Export Policy, using people and their occupations as human capital, commodifying labor into a resource. Now, 14 million Filipinos are abroad, majority of whom are women. Often times, they become vulnerable and are lured into human trafficking situations and other kinds of abuses.”

“We, in Anakbayan New Jersey, stand against the privatization of education, Labor Export Policy, and militarization of schools and communities in the Philippines and other developing nations in the name of maximizing profit with complete disregard for the peoples’ basic rights. Unfair economic strategies discussed by international formations such as the APEC are at the root of consistently increasing tuition fees, export-oriented educational system, and attacks on indigenous schools and self-sustaining communities, such as the Lumad people of Mindanao,” stated Bea Sabino, Secretary General of Anakbayan New Jersey.

On the eve of the APEC summit, hundreds of delegates from the International League of Peoples’ Struggle (ILPS), International Migrants Alliance (IMA), and International Women’s Alliance (IWA) joined thousands of other Filipinos and allies in the Peoples’ Campaign Against Imperialist Globalization (PCAIG) in protesting the APEC in the Philippines.

The ILPS, as the largest global alliance of anti-imperialist, progressive and democratic organizations, also just concluded its 5th International Assembly with the theme “For A Socially Just World, Strengthen the Peoples’ Solidarity and Intensify the Struggle Against Imperialist Plunder, Crisis and War”.

The action in New York is part of the bigger call to oppose the neoliberal agenda of the US.

“As people living in the number one imperialist country today, we know that the policies APEC passes are not just detrimental to the 3rd world, but also to people here, from New York to Baltimore. We see the ongoing war on poor people and people of color. We call on all people from the US to Mexico to the Philippines to resist APEC’s narrative of ‘inclusive growth and sustainability’,” Pareja said.

“The youth and the oppressed peoples must remain at the forefront of this long struggle against imperialist plunder of our homelands. We must actively participate in the peoples’ movement for genuine democracy in the Philippines and elsewhere,” ended Sabino. 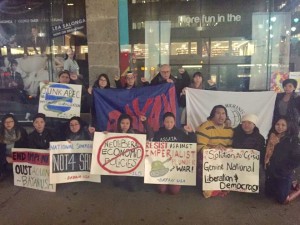