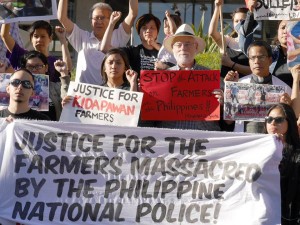 (Photo Above:  Filipino leaders and faith leaders protested in front of the Philippine Consulate in Los Angeles to demand justice for Kidapawan farmers,  Credit: Eric Tandoc)

Los Angeles, CA – On April 2nd, 2016, local activists and church people joined around fifty Filipinos from across Southern California to hold a rally in front of the Philippine Consulate in protest against the recent massacre of Filipino farmers in Kidapawan City, North Cotabato, Mindanao, Philippines.

BAYAN USA, an national alliance of progressive Filipino organizations of women, youth, students, workers, and artists mobilized their members from Los Angeles, South Bay, West Covina, and San Diego to condemn the massacre in Mindanao. Beginning on March 30, the Filipino farmers had launched a 4-day protest barricading the North Cotabato Highway to demand 15,000 sacks of rice and immediate relief after 7 months of severe drought. Although the local government had declared a state of calamity due to the drought, the governor refused to disperse any emergency relief. Instead, the Philippine National Police fired M16 rifles at the protesters, resulting in at least 5 deaths, 100 injuries, and 87 farmers and 6 children missing.

“It is horrendous and despicable what the Aquino regime has done to the farmers and Lumad in Kidapawan who went down from their villages and suffered hunger and starvation after 7 months of El Niño,” said Terrie Cervas, Secretary General of Gabriela USA, a women’s organization fighting for the rights and welfare of Filipino women and children.

Members of Kapit Bisig Kabataan Network, a national Filipino-American youth and student led relief network built in response to Typhoon Haiyan, were also in attendance.  “This incident is so reminiscent of the neglect that typhoon survivors faced when they demanded from Malacañang palace to have assistance,” said Jewelle Dela Cruz, Southern California Regional Coordinator of Kapit Bisig Kabataan Network. “The farmers didn’t receive anything.”

While the Philippines is one of the largest producers and exporters of rice, a vast majority of the peasants and farmers who till rice fields face hunger, abject poverty, landlessness, and land grabbing by foreign multinational corporations.  “A lot of solutions have been tried before but really history has taught us that there’s no better solution to the problem of landlessness and the lack of rights than the national democratic solution, which includes genuine agrarian land reform,” said Nap Pempeña, Vice Chairperson of Anakbayan-USA, a national Filipino youth and student organization. 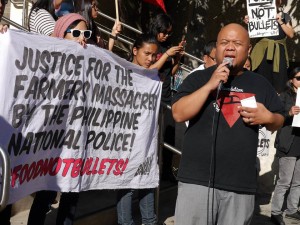 Romeo Hebron, Southern California Regional Coordinator of BAYAN USA explained, “What we just saw is a government that would rather kill its people and let them starve than let them stand up for their rights.” Hebron continued, “We have to demand that the people get their needs met, that they can feed their families.  We have to end neoliberal policies, so the Philippines can be more independent.”

Local activists who recently visited the Philippines also came to show their support. “As Central Americans and Latinos in the United States, we denounce all acts of violence in our communities demanding their basic human rights such as food, land and water. This is what we learned in the Philippines — that land is life,” said Nancy Zuniga, a Los Angeles community organizer with the Human Rights Alliance for Child Refugees and Families. 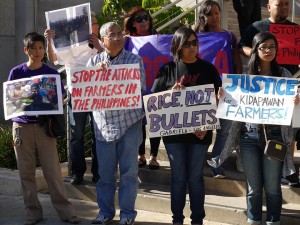 Currently, at least 4,500 farmers have sought refuge at nearby Spottswood United Methodist Church in Kidapawan and are currently facing food blockades, arrests, and fines for launching protests. “The UMC in Kidapawan helped the people to take a stand in their faith and in their love for others. This should be done by anyone who believes that justice can be achieved by serving those in need,” said Rev. Roy Padilla, Filipino Pastor at Rosewood United Methodist Church in Los Angeles. “The government, who is supposed to do work, becomes the one who oppressed, enslaved, and repressed these people who only want a better future.”

Hebron explained, “The threat to the Filipino farmers wasn’t just El Niño and the drought. The dangerous threat was the Philippine government’s violent shooting of poor farmers struggling to survive.”  He continued, “We must continue to educate the community about this issue, because only through our unity can we win justice for the Kidapawan farmers and genuine change for the Filipino people.” 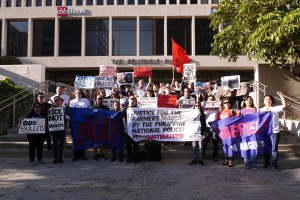 (Photo Above:  BAYAN USA led a protest and rally in at the Philippine Consulate in Los Angeles to demand justice for Kidapawan farmers and immediate relief to all the farmers and victims.  Credit: Eric Tandoc)

BAYAN-USA is an alliance of 20 progressive Filipino organizations in the U.S. representing students, scholars, women, workers, artists, and youth. As the first and largest international chapter of Bagong Alyansang Makabayan (BAYAN-Philippines), BAYAN-USA serves as an information bureau for the national democratic movement of the Philippines and as a center for educating, organizing, and mobilizing anti-imperialist and progressive Filipinos in the U.S.