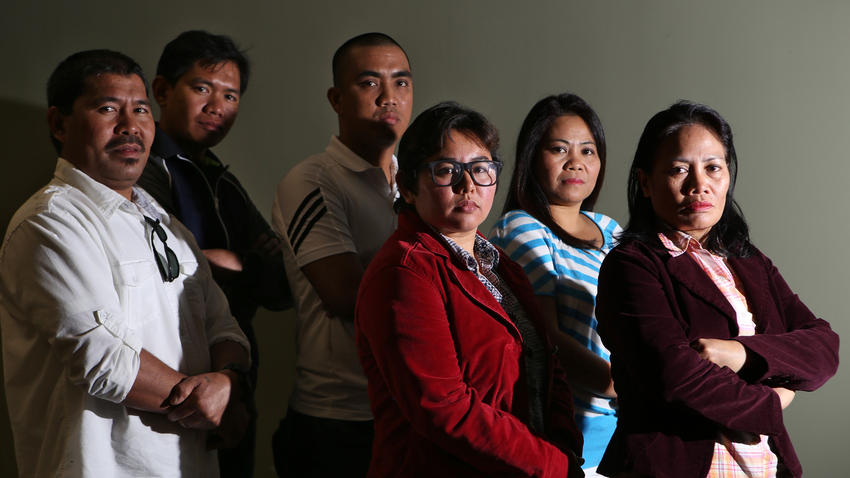 BAYAN USA stands together with the 11 trafficked Filipino workers of L’Amande French Bakery in Beverly Hills and Torrance, California who are victims of human trafficking, labor violations, and retaliation by Analiza and Goncal Moitinho de Almeida, the owners of the business.  We call for justice for the workers and stand together with them as they continue to fight for their rights, dignity, and safety of their families.

Earlier this year, the 11 Filipino bakery workers came forward to expose the deplorable working conditions and labor trafficking schemes of the Almeidas.  In 2012, Analiza recruited the workers in the Philippines by enticing them with the promise of receiving salaries of $2,000 a month as bakery workers.  Instead, many of them were subjected to abusive treatment including working as domestic servants at the Almeidas’ home, being forced to sleep on the laundry room floor, and enduring physical labor such as housekeeping, painting, and landscaping.  The workers filed a $1 million lawsuit against the Almeidas for multiple violations including illegal recruitment, paying less than the minimum wage, discrimination, harassment, failure to pay overtime pay, and denying workers days off.  They were paid $2-$3 an hour and oftentimes working 15-17 hours a day without meal or rest breaks.  In 2014, the California Labor Commissioner’s Office ordered the Almeidas to pay roughly $250,000 in overtime wages to the workers.

This past week, news broke revealing the Almeidas’ have quickly fired the rest of the bakery workers, closed their two bakeries, and sold their multi-million dollar properties in Southern California, including a 17-unit rental apartment complex in Long Beach worth $2.4 million alone.  They are currently in the process of repositioning their $1.4 million estate in Rolling Hills to Ana’s father, Juan Santos, former CEO of Nestle (Philippines) and Chair of the Social Security Administration, in a frantic attempt to keep the properties out of reach of the lawsuit case, a common tactic used by bad employers found guilty of wage theft.  Santos’ role in the scandalous sale of his daughter’s properties only further demonstrates the family’s attempts to escape accountability.

“The Almeidas are cut from the same cloth as Ana’s father, Juan Santos, a powerful and wealthy bureaucrat, that has not been held accountable for the violence and abuse against Nestle workers,” said Nikole Cababa, BAYAN USA Deputy Secretary General.  “The L’Amande workers are tossed into a corner because the owners have used threats against their families in the Philippines.  How can the workers rest easy knowing the Aquino government fails to prosecute traffickers?  The Aquino government should also do its job to investigate the Almeidas and protect the workers’ families.  But Aquino has done nothing to truly address the plight of migrants and trafficking survivors,” Cababa continued.

The situation of the trafficked Filipino bakery workers is not a new issue to the Filipino community, as in the case of Mary Jane Veloso, a trafficking victim and single mom on death row in Indonesia.  According to the Philippine Department of Labor & Employment, an average of 6,092 Filipinos are forced to migrate everyday in order to work abroad totaling up to 12 million Overseas Filipino Workers (OFWs) around the world.   In 2014 alone, $26 billion in remittances have been sent back to the Philippines, a majority of which been sent by OFWs in the U.S. (Source: Bangko Central ng Pilipinas).  In the past five years of the Aquino regime, poverty and unemployment have only worsened as the richest 1% have become richer, and the poorest remain landless and jobless.

BAYAN USA holds both the Aquino and US governments accountable and demand they uphold the rights of OFWs such as the 11 Filipino bakery workers.  We demand the Aquino government immediately address underemployment in the Philippines by raising the monthly minimum wage to P16,000 (~$345 USD), so that people like the Filipino bakery workers will not be forced to leave the country and be subjected to exploitative working conditions in the first place.  We call for the elimination of the Labor Export Policy (LEP) and push for the Philippine government to create national industries to build a more sustainable economy and living wage jobs for the Filipino people.

BAYAN USA is committed to seeking justice for the Filipino bakery workers and fighting against human trafficking.  BAYAN USA member organizations in Southern California will be gathering together this week to coordinate ways to support the trafficked bakery workers.  We pledge to continue educating, organizing, and mobilizing our members and allies to build unity and support for the workers.  We will continue to stand together with the workers to hold the Almeidas accountable for their continuous exploitation of the workers.  Bernadette Ellorin, BAYAN USA Chairperson, explained, “We can only rely on our collective unity and organizing to protect the rights and welfare of OFWs.  We call on the Filipino community to educate and organize with us to put an end to human trafficking and win real justice for the 11 bakery workers.”

Justice for the 11 Filipino Bakery Workers!