Justice for the Victims of the Kidapawan Massacre 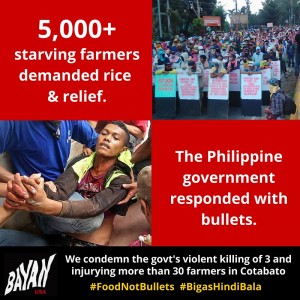 On the morning of April 1, 2016 more than 5,000 farmers and community members staged a protest in Cotabato, Mindanao demanding immediate relief and aid from the Philippine government due to the severe drought in the region when combined forces of the Philippine National Police (PNP) and Armed Forces of the Philippines (AFP) opened fire into the crowd including children, killing at least three and injuring more than 30 people.

“This speaks to the core to what is absolutely rotten in Philippine society– the domination of corrupt landlords over the government and the landlessness of the majority of the Filipino people. The farmers and protesters were simply demanding food aid and relief from the government, and what they got in return was violence. The Aquino government is guilty of these crimes against humanity, and justice has yet to be served for the more than 300 extrajudicial killings under his term,” stated Bernadette Ellorin, Chairperson of BAYAN USA. “The attacks on farmers and indigenous communities have become part of Aquino’s legacy, continuing in the same vein as the Mendiola and Hacienda Luisita massacres.”

The Philippines is one of the top producers of rice and yet cannot feed its own people. Instead, most of the rice produced in the Philippines is exported out of the country. The priority of the Philippine government is on cash crops like pineapple, rubber and sugar, while more than 23 million Filipinos live in extreme poverty. With the neoliberal policies of the government opening the Philippine’s natural resources to be extracted by foreign corporations, there has been an increase in violence upon indigenous communities, especially against the Lumad indigenous groups in Mindanao because their ancestral land is literally filled with gold, metals, and minerals.

“The Philippine government’s military and local police along with armed paramilitary groups have illegally occupied schools, murdered school and community leaders, opened fire at children in these schools and now violently dispersed peaceful protesters with impunity,” Ellorin continued. “With the National Philippine Elections approaching, we all can see that the current government has never had any backbone in its claims of ‘Daang Matuwid,’ and the same old games of corruption and violence will only continue if the Aquino-supported clique is elected. The withholding of calamity aid and food relief for the starving farmers is linked to the Aquino government’s electoral corruption, wherein public funds for calamities are instead pocketed by government bureaucrats. We need genuine change in our economic and political system, one that is people-centered and focused on developing Philippine national industries and agrarian reform in order to build a self-sustaining country that can feed and support its people.”

BAYAN USA calls upon all people who stand for human rights and self-determination to take a stand against the Philippine government’s violence upon the farmers and indigenous communities!

FOOD IS A HUMAN RIGHT!

Take Action NOW to Demand Accountability for Police and Military Violence Against Farmers and Indigenous People Protesting the Government’s Withholding of Food Aid!