The sun of reason that shines in the East clearly shows to our eyes that have long been blinded the path that we ought to follow: by its light we can see the claws of cruelty threatening us with death. Reason tells us that we cannot expect anything but more and more sufferings, more and more treachery, more and more insults, and more and more slavery. Reason tells us not to fritter away time hoping for the promised prosperity that will never come and will never materialize. Reason teaches us to rely on ourselves and not to depend on others for our living. Reason tells us to be united in sentiment, in thought, and in purpose in order that we may have the strength to find the means of combating the prevailing evils in our country.

And so, my brethren, prepare yourself for the fight and rest assured that victory will be ours, for righteousness and the sanctity of duty are on our side. The enemy, that execrable foreigner who happened to come to these shores, is fighting only to victimize and dominate us in this our land.

In all these, and in order that the sacredness and honor of our country be made complete, in order that the whole world might witness the nobility of our character, let us not emulate our enemy in this detestable conduct of the war, let us not go to battle merely in the interest of killing, but rather in defense of the liberty of our country, and thus fighting cry out at the top of our voices: Mabuhay! Long live the sovereign people of the Philippines!

In these times, when the Philippines’ commander in chief shamelessly surrenders our country’s sovereignty, and foreign countries dominate our land, waters, economy, culture, labor, and humanity, Filipinos all over the world need to invoke the legacy of Andres Bonifacio to inspire and guide our continued struggle for national democracy in the Philippines.

Andres Bonifacio was a prominent leader of the Katipunan, the armed rebellion that in 1989 fought off more than 300 years of Spanish colonial rule. He came from humble beginnings and little education and nonetheless understood the oppression and exploitation of his people by the Spanish colonizers, learning about revolution and liberation through both study and practice. Current Philippine President Benigno Aquino III, on the other hand, was born into privilege and received the most prestigious education yet still refuses to acknowledge, and does little to alleviate, the suffering of the vast majority of his countrymen. Bonifacio embodied a leader whose love of his homeland and people fueled him to lead a rebellion that ultimately drove out Spanish colonialism. Aquino’s love of wealth invites U.S. neocolonial rule with open arms to maintain its power at the expense of his fellow Filipinos.

Aquino’s subservience to the U.S. and its imperialist demands shows in his unwavering willingness to increase the presence of the U.S. military in the Philippines and grant foreign multinational corporations unbridled access to the Philippines’ natural resources. He is no different from his predecessors, who all originate from dynasties of the small, elite landowning class. Their interests have always been to uphold the grossly uneven status quo, while fattening their pockets through corrupt governmental policies as has been revealed in the latest pork barrel scandal and rigged election processes. Every tragedy and disaster, as demonstrated in his lackluster response to Typhoon Haiyan/Yolanda relief, is a new opportunity for Aquino to work hand in hand with his imperialist puppet-masters to rebuild political structures to their advantage and siphon what resources are left into their control.

Andres Bonifacio sacrificed his life to drive out a foreign occupier and its military, and to safeguard Philippine land and resources for Filipinos themselves. The Philippine Revolution to defend the rights of Filipinos against the Spanish colonizers aimed to free the Philippines from foreign control by any means necessary. It was an armed struggle that won the revolution against Spain, in spite of the looming U.S. colonial takeover, which was violently rearing its head in the Pacific region from its spread to Guam, Puerto Rico, and Hawaii. Despite receiving nominal independence from U.S. colonial rule in 1946, and receiving a mere subnote in U.S. history textbooks, it is clear that the anti-colonial struggle from Bonifacio’s day continued into the Philippine-American War and into the present. We must only examine the current conditions of Philippine society to see the harsh chronic destruction of U.S. imperialist plunder. These conditions call for a radical change to build a new society that will truly serve the people’s basic needs and interests.

This is precisely why the Filipino masses must take it upon ourselves to organize our collective power and continue the revolutionary spirit of Bonifacio and the Philippine Revolution to fight for national sovereignty and genuine independence.  We must eradicate the continuing root problems that stifle the growth and self-sustainability of the Philippines in order to build a new society without U.S. imperialism, bureaucrat capitalism, and feudalism.

BAYAN USA salutes all Filipinos who celebrated the 150th birthday of Andres Bonifacio! This spirit must be alive until we are victorious! We must fully embrace and materialize our National Democratic program for genuine land reform and national industrialization while building pro-people policies. Through our alliance of youth, women, workers, peasants, and all those who join in this National Democratic struggle, with formations beyond the physical borders of the Philippines, we will continue to develop, grow, and sharpen our membership to advance our collective struggle until the Philippines is truly independent and we can proclaim victory.

We especially salute Anakbayan chapters across the US- New York, New Jersey, San Diego, Los Angeles, East Bay Area, Silicon Valley-South Bay Area and Seattle have joined the National Democratic youth in the Philippines as embodying the true spirit of Bonifacio as youth leaders continuing the struggle born of our long Philippine history of resistance! 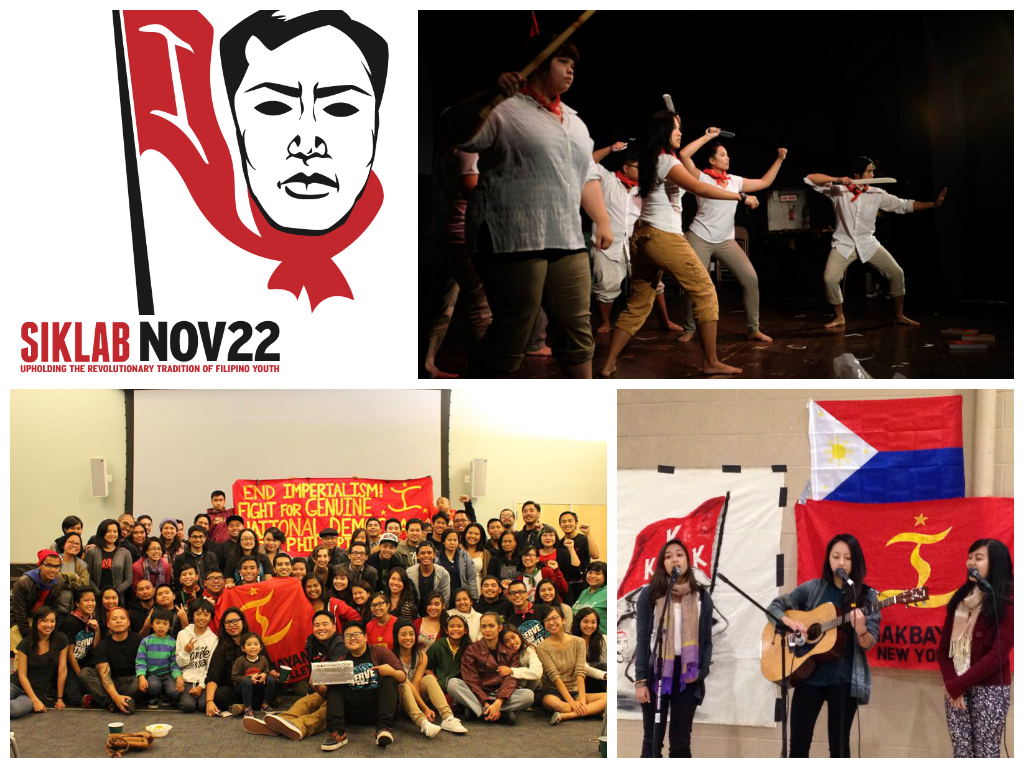