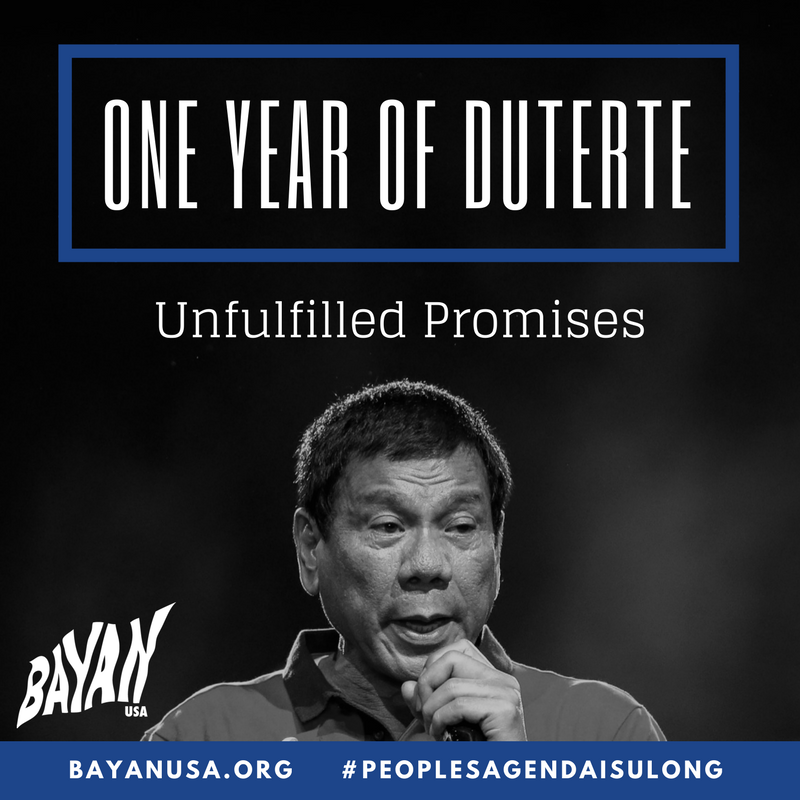 Today marks the completion of Rodrigo Duterte’s first term as President of the Philippines. Last year, the People’s Summit at the University of the Philippines brought together youth, workers, peasants, women, indigenous people, health professionals, artists, and educators to produce a 15 point people’s agenda laying out the demands and much needed reforms on various topics such as the economy, social policy, peace and human rights, national sovereignty, and governance.  The election of Duterte, the former Mayor of Davao City in Mindanao, demonstrated a clear desire from the Filipino people for genuine change; however, how much has really changed?

Duterte began his term on a promising note with his appointment of progressive Filipino leaders such as Rafael “Ka Paeng” Mariano to the Department of Agrarian Reform (DAR), Judy Taguiwalo to the Department of Social Work and Development (DSWD), and Liza Masa to the National Anti-Poverty Commission.  In contrast to his predecessor, Duterte made a distinctive move to pursue peace talks with the National Democratic Front of the Philippines (NDFP) which successfully completed four rounds of talks, resulted in the release of 19 NDFP peace consultants, and forged an agreement on free land distribution. On the other hand, much of Duterte’s progressive rhetoric simply became unfilled promises. 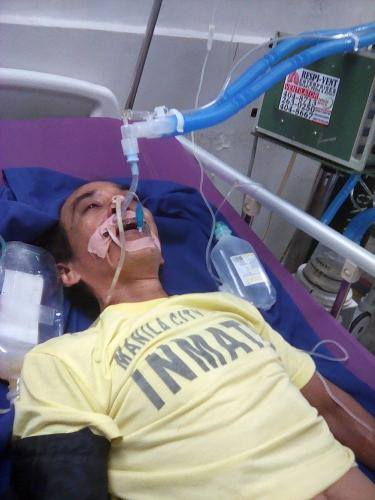 (Photo: Bernabe Ocasla on respiratory support before his death.)

Duterte’s flip-flop fashion can also be seen in the struggle for genuine peace in the Philippines.  He began his year making promises to release more than 400 political prisoners facing trumped up charges. Instead, he has yet to grant general amnesty, and his administration is marked with new political prisoners and the untimely deaths of Bernabe Ocasla and Ed Serrano.

Bowing Down to the US and Violating Philippine Sovereignty

Duterte made bold headlines by declaring he would pursue an independent foreign policy, particularly away from US foreign influence.  Yet after a year, Duterte has not terminated any of the lopsided agreements that benefit the US, including the Visiting Forces Agreement (VFA) and the Enhanced Defense Cooperation Agreement (EDCA).  Instead, Duterte has conceded even more power to the AFP and US minions such as General Eduardo Ano and Defense Secretary Delfin Lorenzana.  Foreign intervention in the Philippines continues unabated with US military troops, advisors and special forces present for the recent Balikatan war exercises, intelligence gathering using drone surveillance, “battlespace awareness” provision in Marawi, and weapons. 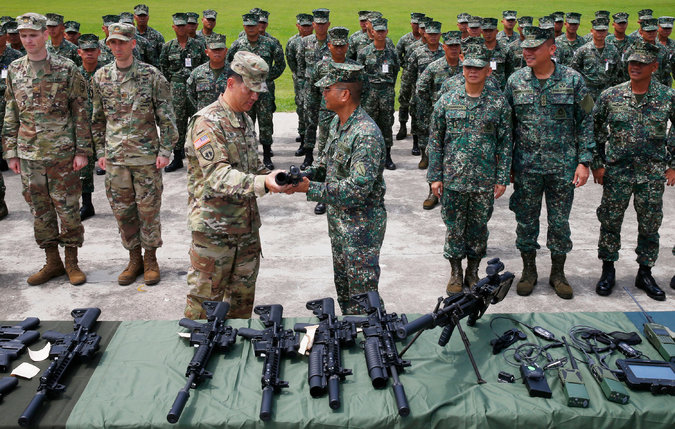 A critic of labor contractualization in word, the Duterte administration failed to do anything significant in action to regularize workers or raise the national minimum wage.  At least 21 million Filipinos continue to live in extreme poverty on less than two dollars a day. The International Trade Union Confederation released a report naming the Philippines as one of the worst countries in the world for workers.  The police forces continue to intervene in labor union activities by using violent dispersals and union busting tactics in order to protect foreign companies, such as the Korean-owned Shin Sun Tropical Fruit Corporation. 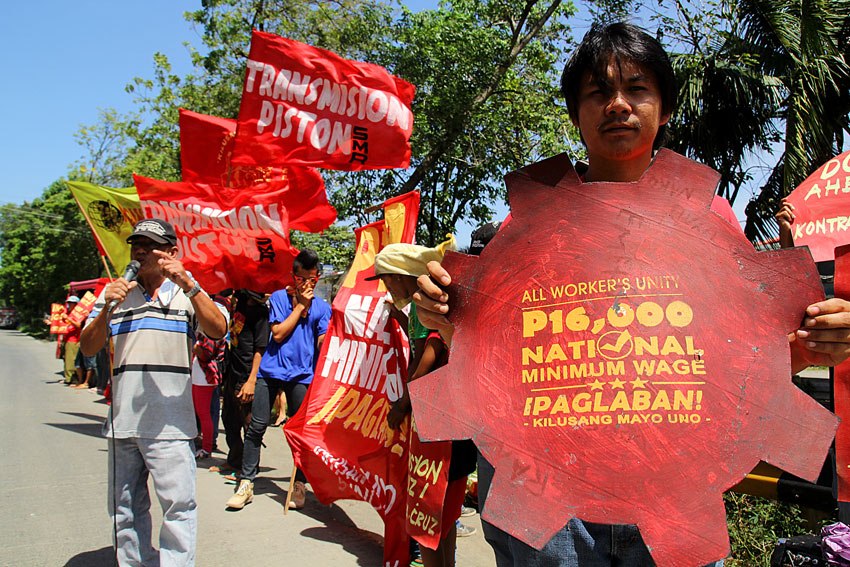 The Duterte administration has also failed to provide basic social services to the people to improve their quality of life, including housing, health, and education.  The failure of his administration to address the housing crisis has also left many urban poor communities with no other option but to organize for their rights and occupy government housing projects that lie idle.

Duterte’s over-reliance on foreign investments and the lack of concrete steps towards national industrialization will only worsen the import-dependent and export-oriented economy.  Without addressing widespread government corruption, the problem of pork barrel persists, and the deep cuts to social services and education only demonstrate Duterte’s pursuit of upholding neoliberal policies and exporting Filipinos as cheap labor across the globe. 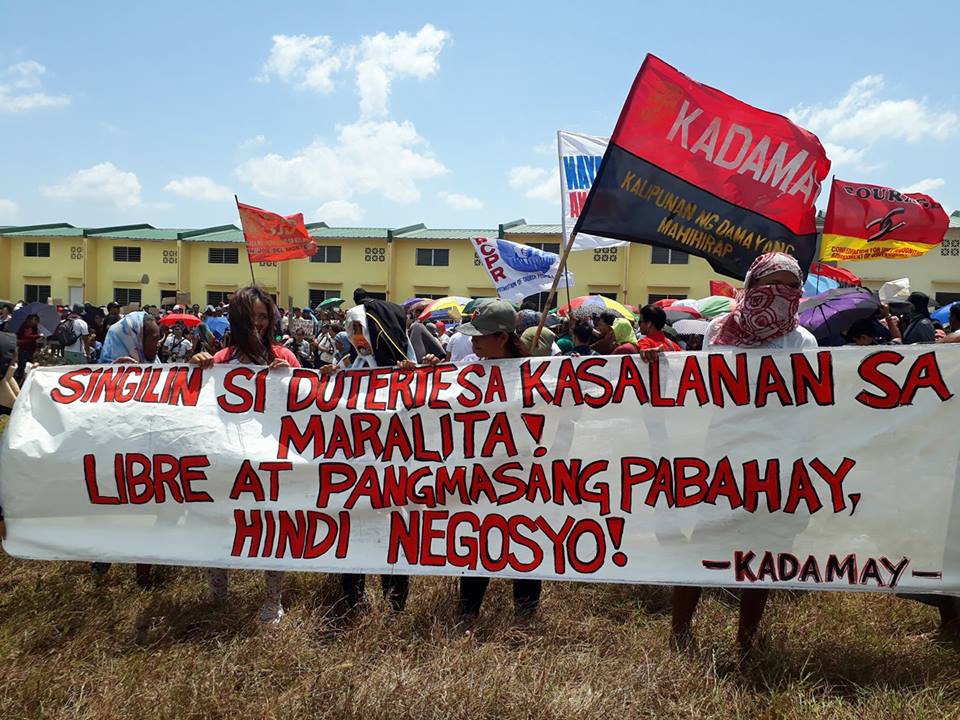 In the first year of the implementation of the K-12 program, it is estimated that at least 2.5 million Filipino youth dropped out of school. The commercialization of education and the lack of decent jobs has pushed more youth into the margins, particularly working class and poor youth.  The costs of tuition and school fees are also on the rise at 1,013 elementary and high schools, placing the burden on impoverished families struggling to survive. 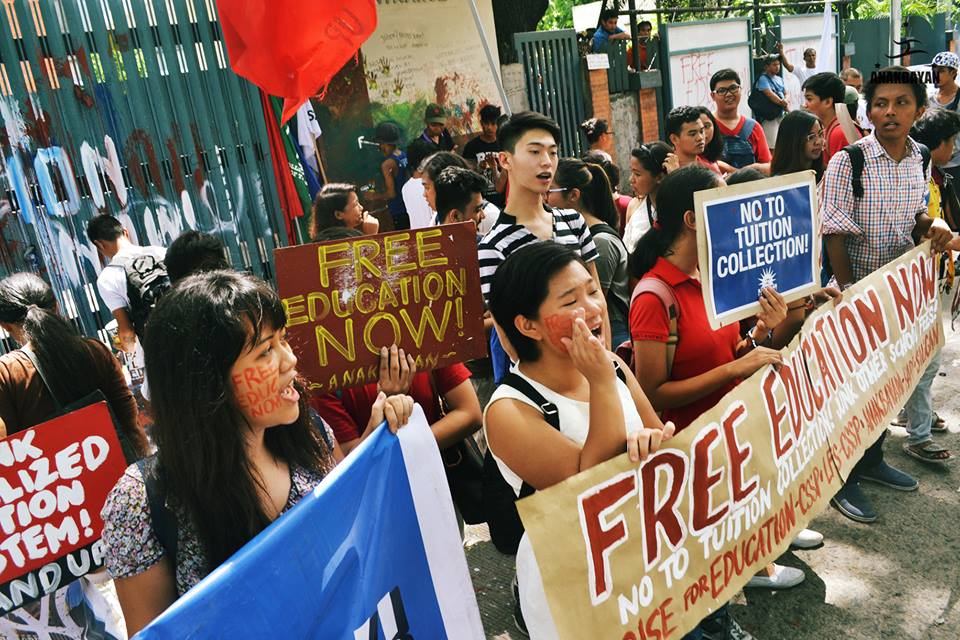 Duterte’s infamous “Oplan Tokhang” Drug War has led to over 8,000 extrajudicial killings.  Duterte’s drug war has disproportionately affected urban poor communities neglected by his own administration, instead of targeting big drug dealers and corrupt government officials that perpetuate the drug epidemic.  A persistent culture of impunity within the administration also fails to hold accountable the Philippine National Police (PNP) and Armed Forces of the Philippines (AFP) for human rights violations. 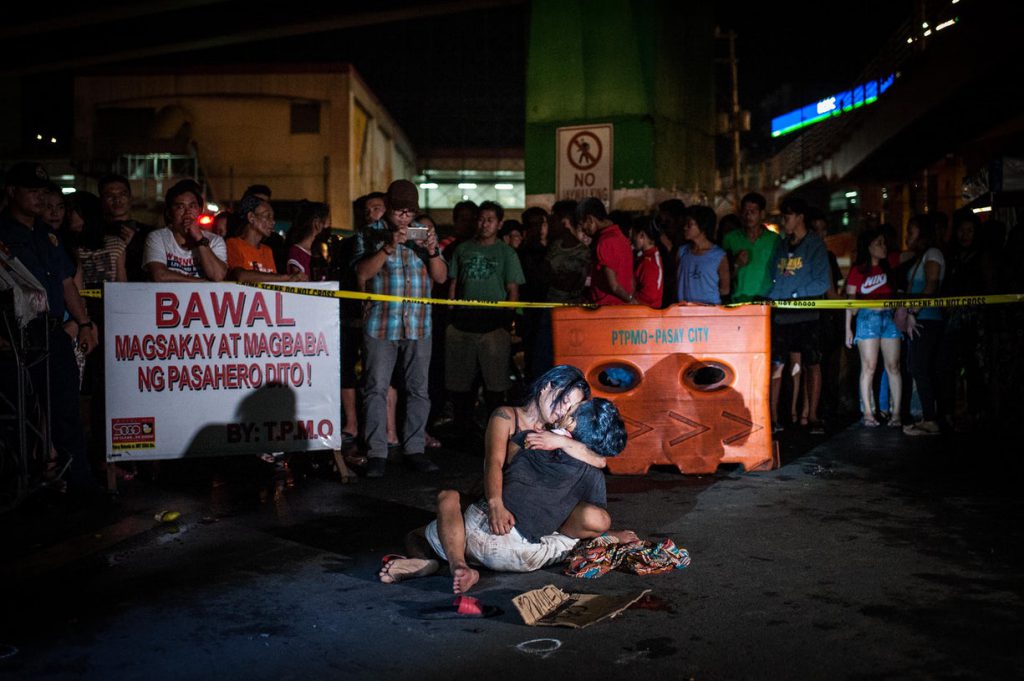 Duterte’s “all-out war” and “Oplan Kapayapaan” counterinsurgency program have resulted in the military occupation of schools and indigenous communities, aerial bombings, mass displacement, illegal arrests and harassment of civilian communities.  The problem has only exacerbated with over a month of Marcos-style Martial Law being implemented on the entire island of Mindanao.  The incessant bombings have forced over 400,000 Filipinos in Marawi and surrounding areas to seek refuge in makeshift evacuation centers while their homes and livelihood continue to be destroyed.  Many of those fleeing for refuge have undergone trauma, family separation, illness, and starvation.  While Duterte has made his rounds to various military camps to promote his martial law declaration, he has even gone as far as promoting violence against women and making rape jokes at the expense of vulnerable women and children living under military rule and abuse of power.  The recent arrest of the “Davao 4” in Mindanao, the human rights activists from Karapatan and Kilusang Magbubukid ng Pilipinas (KMP), is indicative of the continuous criminalization of activism.

What Must Be Done

We call on Duterte to immediately lift Martial Law, pursue the peace talks to address critical socio-economic reforms, end Oplan Kapayapaan and Oplan Tokhang, and fulfill his promises to release political prisoners, create a national minimum wage, and uphold Philippine sovereignty.  Whether Duterte decides to follow the will of the people or bow to the interests of U.S. imperialism and the militarists in his regime, the masses will never stop organizing for genuine social change and the liberation of our nation. 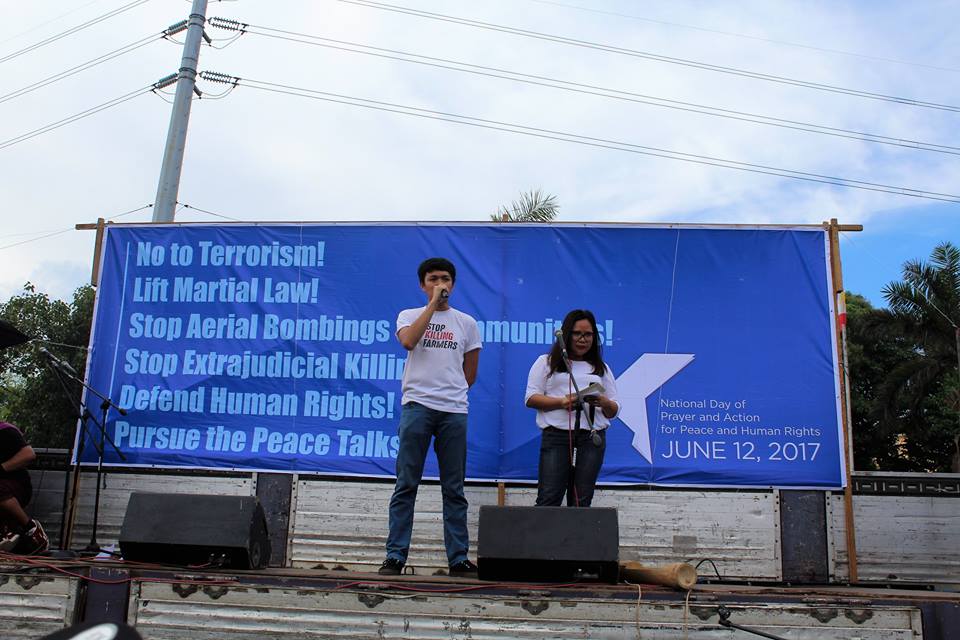