Following President Trump’s visit to the Philippines last month, Duterte has been emboldened to viciously attack the legal left movement with extrajudicial killings of human rights workers, peasants, Lumad, and even a priest within the last two weeks. December 10th is known internationally as Human Rights day. However, President Duterte has started this month off as a bloody December.  In addition to Trump’s promises for increased US military aid, the US has found a way to tighten its grip on the Philippines’ natural resources through initiating an economic “Free Trade Agreement” with the Philippines. BAYAN USA regards any FTA with the US as one-sided and only beneficial to US neo-colonial rule over the Philippines.

Officials from the Philippine government’s Department of Foreign Affairs and National Defense met with their US counterparts to further discuss these matters in Washington D.C., releasing a joint statement on Dec. 1, 2017  reaffirming:

“What this translates to is increased US militarization in times of disaster,  continuing the US war on terror on Philippine soil, intensifying attacks on activists and people’s organizations through US-designed counter-insurgency programs,  and more funding for Duterte’s deadly drug war,” stated Rhonda Ramiro, vice chair of BAYAN USA. “The US has even more firmly attached its puppet strings to Duterte, supporting Duterte’s fascism and moves toward a full fledged dictatorship.”

Philippine National Police (PNP) Director General Ronald “Bato” Dela Rosa, death dealer of Duterte’s Drug War which has killed more than 13,000 people, is also now in the US, most likely to solidify the arms deal with the US State Department for some 26,000-27,000 M-4 assault rifles for the PNP, despite widespread condemnation of the PNP’s perpetration of notorious human rights violations in the Philippines. “The trampling of Philippine sovereignty and increase of US military and economic aid goes hand in hand with an increase in human rights violations,” Ramiro continued. 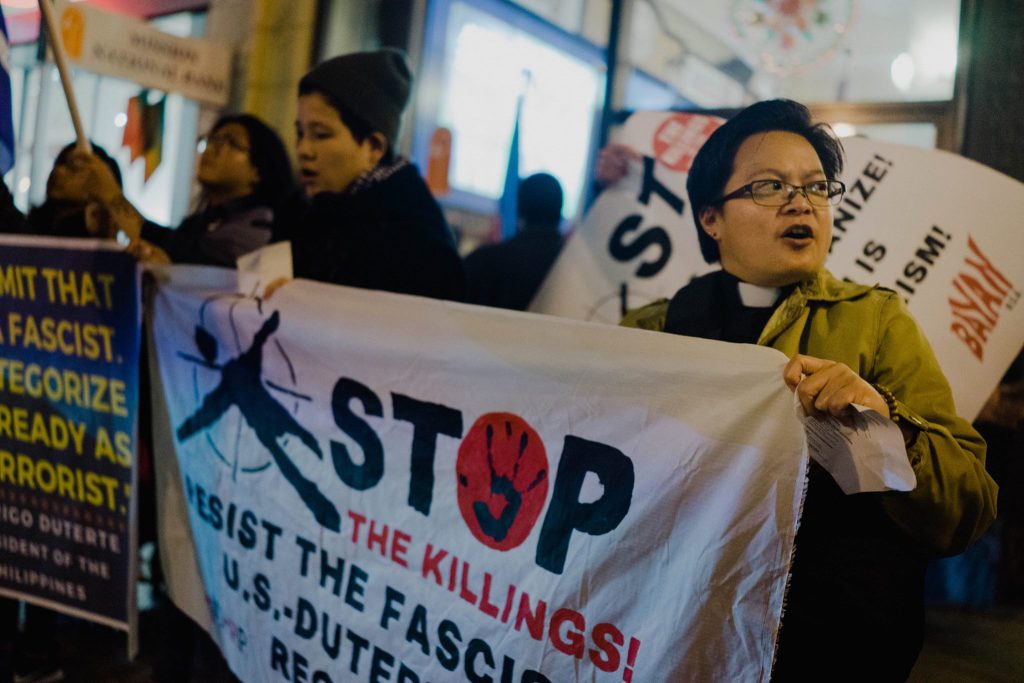