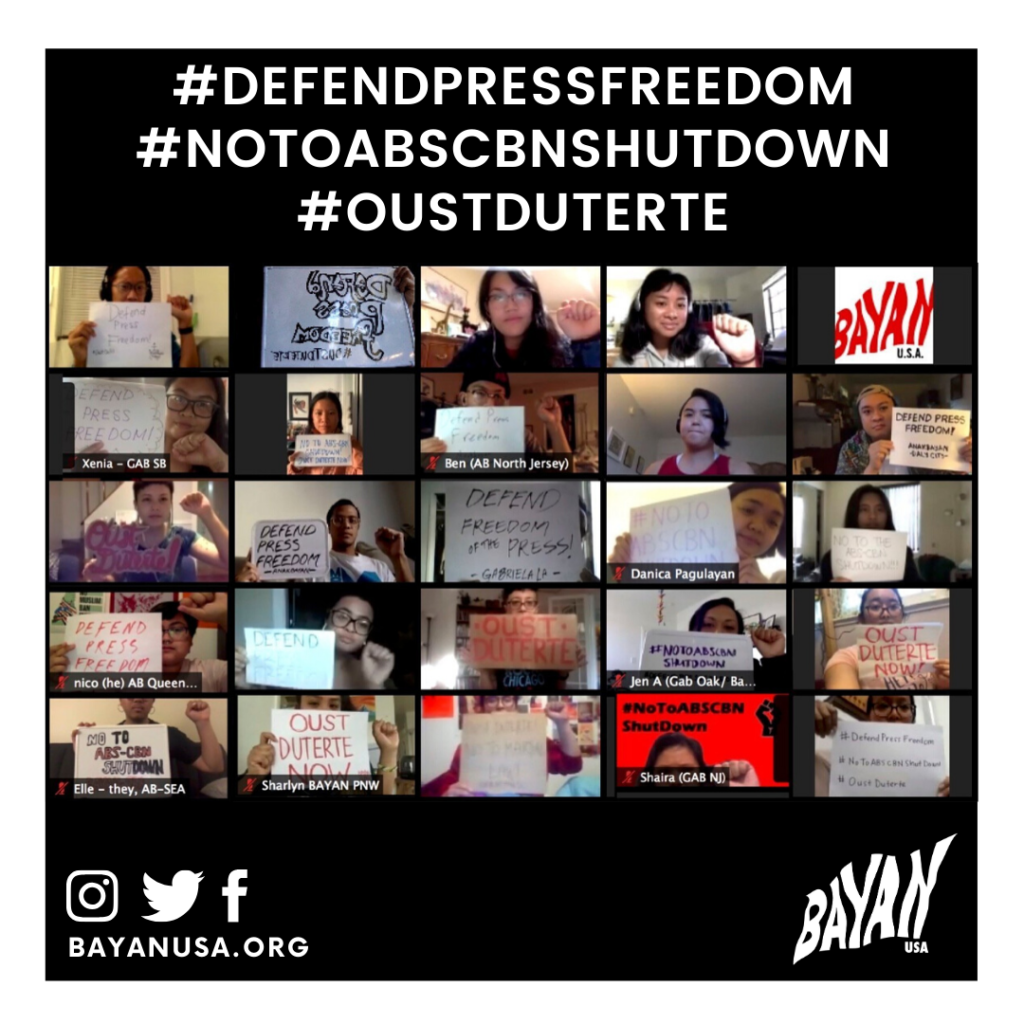 As BAYAN USA, we stand together with 11,000 ABS-CBN workers to condemn President Duterte’s attacks on press freedom.  What does the shutdown of ABS-CBN mean for the Filipino community?  Duterte has a long track record of silencing media in the form of mass arrests, harassment, killings, and full-blown shutdown, which has led to the massive displacement and unemployment of  11,000 workers.  As early as December, Duterte already made threats to stop the renewal of the ABS-CBN franchise given that Duterte was upset the network didn’t air his campaign ads, and aired news exposing his murderous Drug War. The US-Duterte regime is swiftly moving towards a full fledged dictatorship, and controlling the media is key in controlling the narrative.

Duterte is sending a message to anyone critical of his regime, even ABS-CBN, the largest news broadcasting center in the Philippines and popular news outlet for overseas Filipinos in the U.S.  Duterte’s battle with the media isn’t the first time he has tried to silence journalists. Student journalists have been repressed and arrested, like Frenchie Mae of the University of the Philippine Tacloban last February, and even our own Los Angeles-based Altermidya journalists Eric Tandoc and Hiyasmin Saturay in 2018 during a NutriAsia strike.

There have been more arrests than mass testing. The Philippines has now become the leading country in the number of arrested and detained people for alleged quarantine violations during the pandemic, with 120,000 arrests in just one month in the Philippines. Instead of targeting popular media, Duterte should focus on combating the COVID-19 pandemic with 10,000 cases and rising in the Philippines.

“Is Duterte afraid that ABS-CBN will expose his utter failures in keeping our families safe in the Philippines? Does he truly care about the Filipino people when he abandons overseas Filipino workers to fend for themselves?  Duterte has no real interest in improving the lives of the vast majority facing poverty, job insecurity, and a public health crisis.” said Nikole Cababa, Secretary General of BAYAN USA.

She continued, “Almost 4 years of the rotten Duterte government have proven in practice that he is incapable of leading the Philippines to progress and of serving the basic needs of the people. Over 4 million Filipinos live here in the U.S., and we depend on consistent and reliable news and media to stay connected and informed about our motherland, to our families, and loved ones.”

Without ABS-CBN, Duterte will be able to spread more misinformation, unleash paid Duterte trolls, and deprive the public of much needed news coverage.  The one that must be put to a stop is not ABS-CBN, but the Duterte regime itself. When power is monopolized by a single person, fascism rears its ugly head. But the Filipino people are committed to fighting for genuine freedom and a country that promotes progressive and pro-people culture.

“We must work together to shutdown Duterte’s corrupt government, hold him accountable for the criminal neglect of the public health and safety of our families that are facing unemployment, hunger, and militarized violence,” continued Cababa.  BAYAN USA and all its member organizations call for the end of state fascism in the Philippines and martial law tactics!  We cannot allow Duterte to attack the people’s right to free speech and press freedom.  We will continue to fight to defend the rights of every Filipino in the Philippines and overseas.  History reminds us that dictators will not willingly step down, but that they must be brought down by unleashing the truth, by mobilizing people power, and gathering strength in unity.

Let us continue to build a people’s movement that will end Duterte’s dictatorship and instead build a people’s democratic government that is not afraid of the truth, one that takes care of the needs and the health of the people over profit. 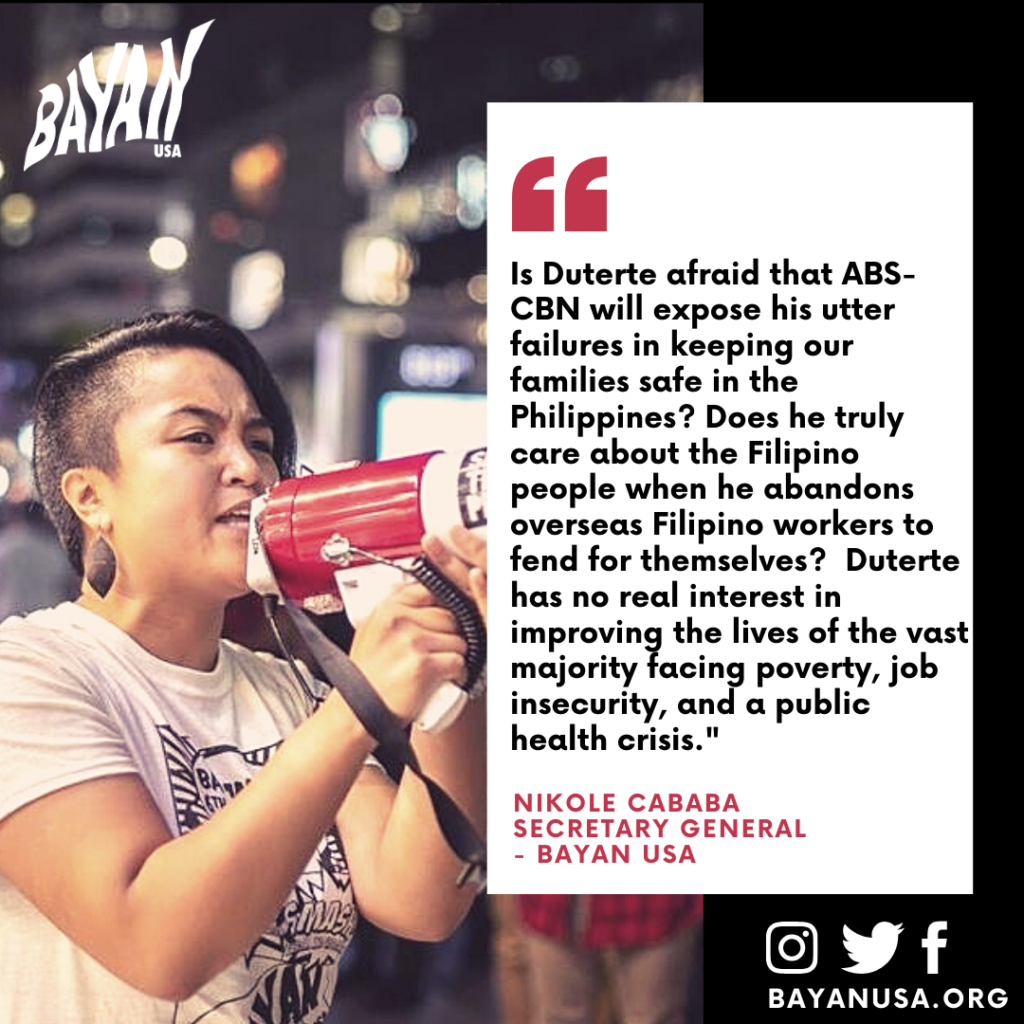