Justice for Melissa Roxas & All Victims of State Repression! 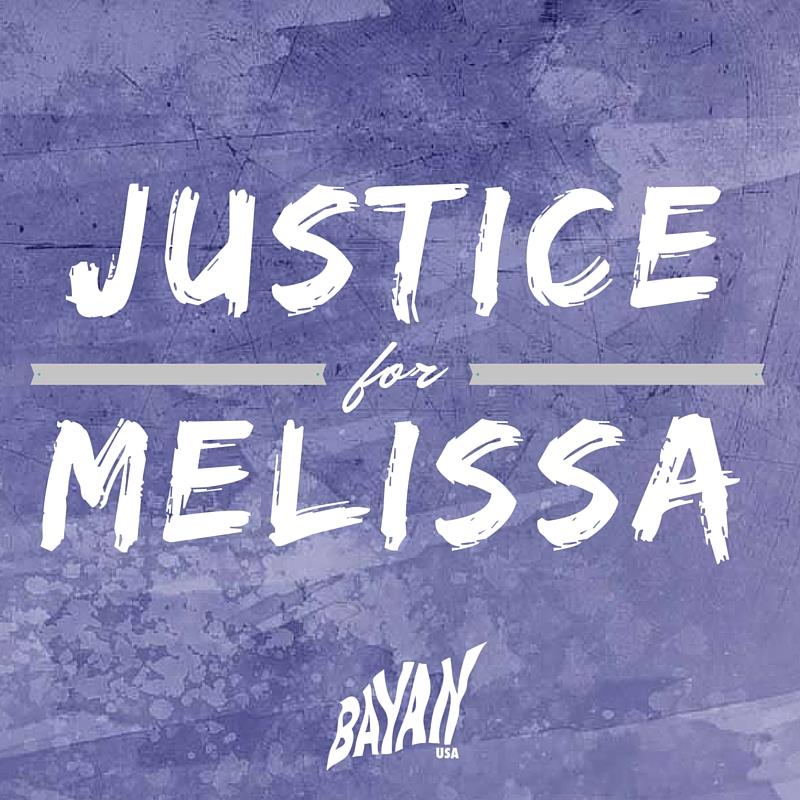 May 19, 2017 marks the eighth anniversary of the abduction and disappearance of Melissa Roxas, a founding member of BAYAN USA, who was abducted on May 19,  and surfaced on May 25, 2009 after international outcry.

Unfortunately, recent moves by President Rodrigo Duterte appear to embolden the hard-core militarist faction in his administration which has denied justice for Melissa all these years. President Duterte recently announced that current chief of the Armed Forces of the Philippines (AFP) General Eduardo Año will be appointed to head the Department of the Interior and Local Government (DILG) at the end of his term with the AFP in October. Año is notorious for orchestrating human rights violations as the chief of the AFP, continuously overseeing the rampant extrajudicial killings, enforced disappearances such as Melissa’s case, torture, harassment and intimidation of activists and communities fighting for genuine land reform and national industrialization. Año is most known as one of the perpetrators of the abduction of Jonas Burgos a youth activist abducted 10 years ago on April 28, 2007 under the infamous counter-insurgency program Oplan Bantay Laya II.

President Duterte and Gen. Año’s dubiously named counter-insurgency program Oplan Kapayapaan (Operation Peace) is simply a continuation of all of the previous counter-insurgency programs. Oplan Kapayapaan has already resulted in the extrajudicial killings of dozens of activists, now also being committed under the guise of Duterte’s infamous drug war. From July 2016 to March 2017, at least 47 peasants and indigenous people have been killed in counter-insurgency operations. Año is just one of many former military men Duterte has appointed to key government positions, including former AFP chief Roy Cimatu, who replaces Gina Lopez as Secretary for the Department of Environment and Natural Resources (DENR), and former AFP Major General Delfin Lorenzana as Defense Secretary.

BAYAN USA demands that President Duterte step off the “trapo” path and take seriously the people’s cry for justice by demilitarizing his cabinet and not appointing Gen. Año to the DILG.  We urge him to end Oplan Kapayapaan and to focus on the real path towards peace and genuine development through continuing the peace talks with the National Democratic Front of the Philippines and beginning to implement reforms outlined in the Comprehensive Agreement on Social and Economic Reforms.  We also demand an end to the impunity which has reigned in the Philippines since before and after Melissa’s abduction, the thousands of extrajudicial killings, abductions and enforced disappearances, illegal arrests and detention of innocent people, torture, violent displacement, and military occupation of schools and churches.

JUSTICE FOR ALL VICTIMS OF STATE-SPONSORED DISAPPEARANCES AND TORTURE!

For more information on the Justice for Melissa campaign visit: JusticeForMelissa.org