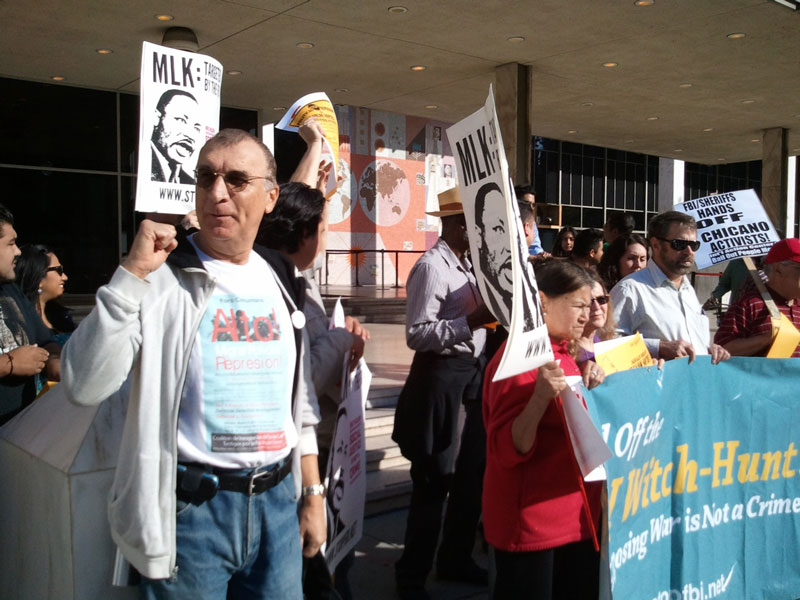 *sign the online petition to have the charges dropped, initiated by the Committee to Stop FBI Repression*

Filipino-Americans across the United States, under the banner of BAYAN USA, stand in solidarity with LA-based Chicano movement activist Carlos Montes, and dozens of other activists in the Minneapolis, Chicago, Grand Rapids and now Los Angeles areas who have been the recent targets of violent FBI raids in their homes and subpoenaed to appear before a Grand Jury. The trumped up charges against Montes include a violation of a firearm code while others in the Midwest have been charged with allegedly providing material support to US-listed terrorist organizations in the Middle East and Latin America. These subpoenaed activists are clearly being targeted by the state for their political beliefs at a time when social unrest grows over proliferating anti-people US policies and laws. We demand all these false charges by the US government be dropped and that the unconstitutional Grand Jury proceedings be canceled.

This resurrected US government campaign against progressives in the US hearkens back to the 1950’s McCarthyist witch hunts and the repressive campaigns that followed such as the FBI’s Counter Intelligence Program (COINTELPRO). These operations discarded constitutional rights and civil liberties in a violent effort to debilitate and paralyze target organizations such as the Black Panther Party (BPP) and other then-strong resistance movements within the US against wars of aggression, racism, and growing economic marginalization. The tactics being employed now follow suit with the Bush Doctrine of anti-terrorism, specifically fanning anti-terrorist hysteria by targeting US-based anti-war and international solidarity activists mobilizing support for national liberation organizations abroad against US intervention that have been listed as foreign terrorist organizations by the US State Department and in a effort to quell dissent and political activism in the US.

It will not work.

This recent spate of FBI raids and Grand Jury repression must be framed in the context of the worsening global economic crisis under US imperialism, the same crisis that spawned people’s upsurge in the Middle East, North Africa, and even Wisconsin. As the perpetrator of the crisis, monopoly capitalists via banks and large financial firms continue with their bail-out campaign of hoarding the world’s private and public wealth from the people worldwide, relying on governments in both industrialized and non-industrialized countries to suppress strong and emerging people’s resistance and international solidarity through escalating political repression. The targeting of legal activists such as Carlos Montes and many others lines up with the ongoing US-funded counter-insurgency operations in the Philippines and in other regions with strong national liberation movements. In the case of the Philippines, US-crafted counter-insurgency campaigns such as Oplan Bantay Laya under the former Arroyo administration and now Oplan Bayanihan under the current Aquino administration have directly resulted in over thousands unresolved assassinations, abductions, secret detentions, illegal arrests and torture of legal, aboveground, civilian activists. Like the subpoenaed activists in the US, these activists in the Philippines have been baselessly accused of being members of so-called front organizations for groups tagged as terrorists by the US such as the Communist Party of the Philippines and the New Peoples Army (CPP-NPA). An overwhelming majority of these targeted activists were and are associated with our mother alliance, BAYAN Philippines.

Furthermore, the US government’s terrorist list has been widely criticized for being arbitrary, unilateral, and unjust. Among those who, until recently, spent years on that US State Department’s list of foreign terrorists was 1993 Nobel Peace Prize Recipient and anti-apartheid crusader Nelson Mandela. Another widely-respected figure in progressive circles worldwide tagged arbitrarily by the US as a terrorist for his politics is Professor Jose Maria Sison, international chairperson of the International League of Peoples Struggle, author, poet, and Filipino political refugee based in the Netherlands.

The insidious character of CIA and FBI operations throughout history and now currently is another level of imperialist warfare waged against the people, particularly people’s liberation struggles that threaten the interests of the world’s ruling elite and financial oligarchy. Like more overt US wars of aggression in the Middle East, the global spread of the US imperialism’s covert structure of reactionary violence in the form of CIA-crafted counter-insurgency operations, military bases and exercises, and even so-called “humanitarian” civic projects, is another expenditure footed by hardworking US tax-payers who must now contend with deadly budget cuts to healthcare, education, housing, and critical services as well as massive unemployment, union-busting, racism, and strong anti-immigrant hate legislation.

Carlos Montes and other targeted activists in the US represent all across the globe who stand for the cause of freedom, democracy, and justice. In addition, their courageous stand to not cooperate with the FBI and the Grand Jury proceedings remind us all that dissent and uprising are universal human rights and that people should never be targeted for their political beliefs. As an alliance of progressive Filipino organizations in the US actively educating and mobilizing our community against US intervention and structural reactionary violence in the Philippines, BAYAN USA recognizes that resistance is inevitably born, bred, and fueled by economic and political repression. The pain of hunger and thirst for freedom in the stomachs of the world’s impoverished by US imperialism overpowers any intimidating or suppressive force imposed by the reactionary state. As the reality of the economic crisis awakens class struggle in the United States, so does support and morale for righteous national liberation struggles abroad that have taken advantage of the conditions of the crisis to advance and reap peoples victories. Integral to this is advancing the movement for genuine democracy, human rights, and civil liberties in the world’s number one imperialist superpower.