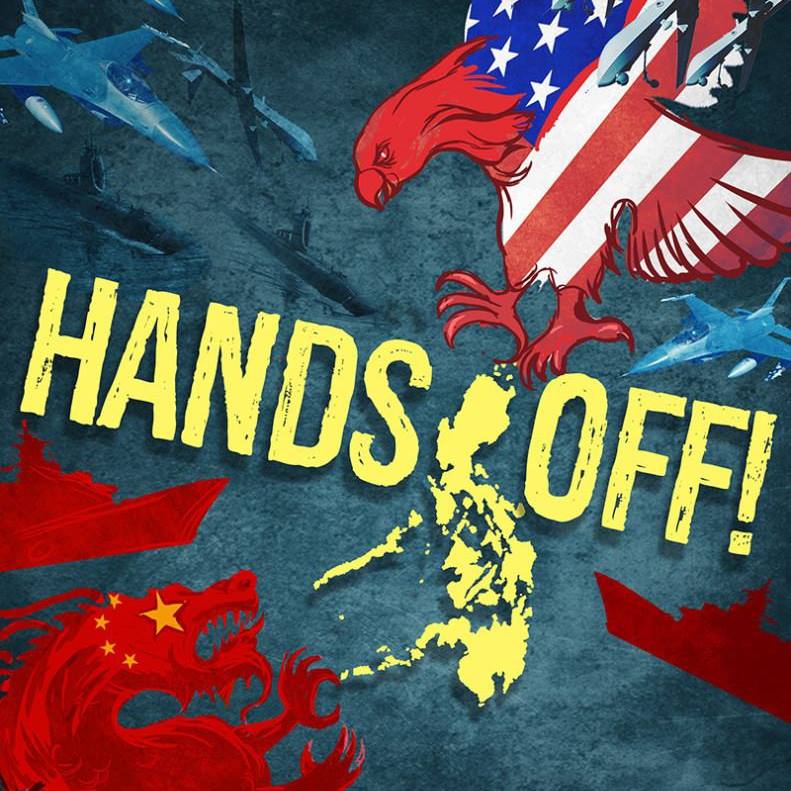 Q: What threats to Philippine sovereignty are you talking about?

Over the past few years, China has been more and more aggressive in claiming territory in the West Philippine Sea/South China Sea that belongs to the Philippines.

China has started to take over reefs and build military installations on islets in the region.  The Chinese navy has been blocking Filipino fisherfolk from accessing the area, even though these fishing communities have relied on the region for their livelihood for generations. These actions violate Philippine sovereignty, the UN Convention on the Law of the Sea, conventions on the environment and the freedom of navigation in the high seas.

But just last year, the US expanded its foothold even further, by enacting the new “Enhanced Defense Cooperation Agreement” which allows the American military to station and utilize forces, ships, equipment and other war materiel on Philippine territory (land, sea and airspace), including places where civilian communities live and work.

The EDCA is considered even worse than a throwback to the days when the world’s largest US military bases (outside of the US) operated in the Philippines, because now the US military isn’t confined to bases and can position itself virtually anywhere in the country.  This violates the Philippine constitution and sovereignty.

They’re both interested for the same reason: Geopolitical power and resources.

China is trying to become a bigger global power, and that requires prime territory and resources. The US is already a superpower but is declining, and it’s trying to protect and expand its domination in the Asia Pacific region.

The disputed region in the West Philippine Sea is “prime real estate.” It contains vast and viable petrochemical and gas deposits; rich marine biodiversity; and sea lanes that facilitate much of the global trade and shipping for the entire region. On top of all that, it is a prime location for military positioning in the region.

In 2012, the US announced plans for the U.S. “pivot to the Asia Pacific” which means shifting 60% of its military forces abroad to the Asia Pacific region. The Philippines is a key link to this strategy, and the US took a step forward already with the enactment of the Enhanced Defense Cooperation Agreement.

The US presence is already antagonizing China.  Allowing more US military to operate in Philippine territory will only attract more antagonism.

During his visit to the Philippines in 2014, President Obama clearly stated that the US would not come to the aid of the Philippines in the event of military conflict with China.  The US has trillions of dollars at stake in the form of investments in and loans from China; siding with the Philippines in a dispute jeopardizes those interests.

The US and Aquino government’s talk the talk of being allies, but the relationship between the two governments has always been one-sided in favor of US interests. Even though the US has promised help to modernize the Philippine military, after decades of aid and training the Philippine military has only regressed. After decades of economic aid and investments, the US has gotten richer while the Philippines has gotten poorer. That’s not genuine friendship based on mutual respect; that’s disfunction.

Q: What is the solution?

The Philippines needs to stand up for itself.  The broad masses of people need to unite to denounce and oppose the dangerous power play of both the US and China and any other country which tries to exploit our people and territory.

If the government isn’t standing up for Philippine sovereignty, the people need to pressure it to change. We need to demand that the government adopt an independent foreign policy that doesn’t cave in to either US or China dictates or aggression

We also need to pressure the government to terminate unequal treaties and agreements that harm national sovereignty.