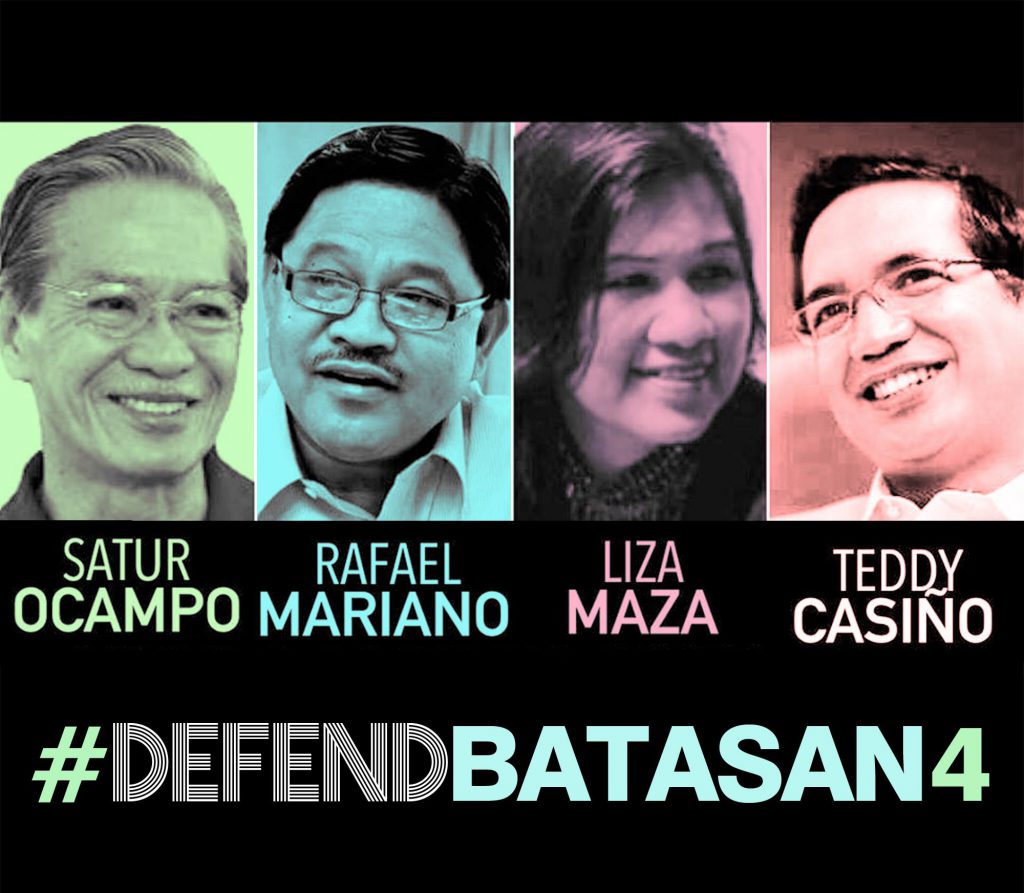 BAYAN-USA denounces the issuance of bogus warrants of arrests for renowned former congresspeople and freedom fighters Satur Ocampo, Liza Maza, Rafael Mariano and Teddy Casino. The excavation of 12 year-old charges that were buried long ago for lack of any credibility is another example of the Trump-backed Duterte regime’s relentless attacks on all who dare challenge the regime’s drive toward dictatorship.

In 2006 under former President–and now Speaker of the House–Gloria Macapagal Arroyo, trumped-up charges of rebellion were filed against six progressive party-list representatives including Ocampo, Maza, Casino and Mariano, as well as Crispin Beltran and Joel Virador, who came to be known as the Batasan 6. While the Supreme Court eventually dismissed the rebellion case, the Arroyo government shot back by filing three fabricated murder complaints in December 2006 against Ocampo, Maza, Casino and Mariano. One murder charge was dismissed by the Guimba, Nueva Ecija Regional Trial Court, and then in July 2008, Palayan Regional Trial Court Judge Evelyn Turla found no probable cause in the two murder charges against the four, citing prosecutorial misconduct and lack of evidence. Now, ten years later, on July 11, 2018, the same judge suspiciously reversed her ruling and issued arrest warrants for Ocampo, Maza, Casino and Mariano, despite the absence of any new information and without any explanation.

This maneuver takes a page from the old Gloria Macapagal Arroyo-George W. Bush counter-insurgency playbook, utilizing the judicial system as a tool of repression. And in just the past month alone, we have witnessed the Duterte regime using every weapon in its dirty bag of US-designed counter-insurgency tricks to silence opposition to Duterte’s reign of terror: the outright murder of peasant, indigenous, and faith leaders; Philippine National Police and security forces of the NutriAsia company violently beating and arresting workers on strike; the massive militarization of indigenous communities in Lianga forcing thousands of people to evacuate; and the underhanded appointment of former president and notorious human rights violator Gloria Macapagal Arroyo as Speaker of the House. The revival of discredited charges against the Batasan 4 that were originally filed under Arroyo is a despicable use of the judiciary as a tool of political repression. The offering of a bounty for the arrest of the Batasan 4 by Attorney Ferdinand Topacio further exemplifies the impunity that the regime is fostering.

BAYAN-USA stands in solidarity with the Batasan 4 and demands that the ridiculous warrants of arrest be withdrawn and the case dismissed. We join with the Filipino people and defenders of genuine democracy and freedom worldwide in demanding an end to the regime’s fascist tyranny, in whatever form it takes.

Please action on behalf of the Batasan 4 today, and respond to the Movement Against Tyranny’s appeal for letters of solidarity. For more information please contact Ms. Gel Marcelino at (0947) 5891578 and email your solidarity messages to stoptyrannyph@gmail.com. Sample letter below.

The WAO were issued in relation to a 12-year-old case that should have been dismissed at the outset due to lack of evidence, witnesses who lacked credibility and amid a campaign of political persecution by the administration of Pres. Gloria Macapagal-Arroyo versus the party lists under the Makabayan Bloc.

Attached are materials that you can use for reference.

We ask you to sign the attached support statement and/or issue your own so that the judge may be enlightened to dismiss the case and withdraw the WAO.

There is no justifiable reason for the order of Judge Evelyn A. Atienza-Turla dated July 11, 2018.

The arrest warrants against the four come ten years after Turla found no probable cause to uphold ridiculous charges of murder. The latest order comes without any explanation for the reversal despite being based on the same evidence, facts and circumstances.

There was no murder case to begin with as far as one supposed target, Jimmy Peralta, died in a vehicular accident, as attested by police spot reports.

That the four lawmakers ordered the killings of Peralta and one Carlito Bayudang to ensure Bayan Muna victory is an outright lie, a concoction by military handlers of false witnesses.

Prosecutors failed to subscribe the affidavits of complainants and their witnesses. They failed to validate or confirm preposterous claims that parroted each other.

Judge Atienza-Turla should have dismissed the obvious fabricated murder charges a decade back.

That it comes amid rising tyranny of the Duterte administration only casts suspicion on the use of the judiciary for political persecution.

The reincarnation of the old Inter-agency Legal Action Group (IALAG) under then President Gloria Macapagal-Arroyo as the Inter-Agency Committee on Legal Action (IACLA) is part of the Duterte regime’s assault on pro-democracy forces, which includes efforts to proscribe as terrorists more than 600 individuals, including legal personalities like Ocampo.

We urge Judge Atienza-Turla to reverse a clearly unjust order. Various courts and agencies have already thrown out similar or related cases. Bayan Muna has even been awarded damages on the perjured statements of witnesses.

We demand an end to the persecution of  Satur, Liza, Teddy, Paeng and all victims of trumped-up charges.