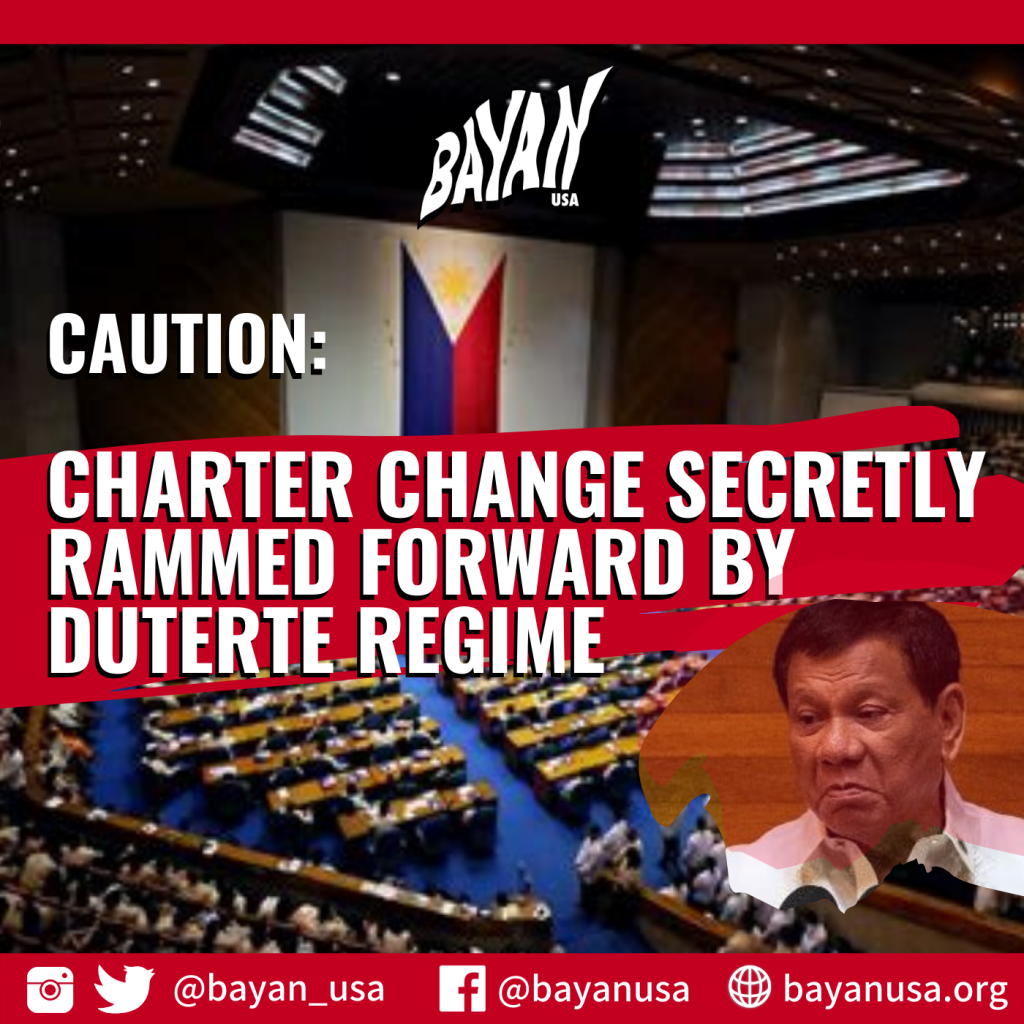 On Dec 11th, the House of Representatives in the Philippines passed a charter change resolution behind closed-doors to seek to amend the 1987 Constitution and lay the ground to pass charter change provisions early next year.  The resolution was secretly passed without the knowledge of the public and media, and while the Southeast Asian Games absorbed national attention.

What is Charter Change?

Charter Change, widely dubbed as “Cha Cha” is any revision (e.g. structural change: federalism) or amendment (e.g. changing term limits) to the Philippine Constitution. The resolution was led by Cagayan de Oro Rep. Rufus Rodriguez and passed by a small executive committee of 14 members, while the House is nearly 300 members.

The 1987 Philippine Constitution currently restricts foreign ownership of businesses to 40%, while this new provision entitles the Congress to by-pass the public and be allowed to pass laws allowing for potentially 100% foreign ownership.

Why is this important?

The Philippine Constitution is considered the most important written document outlining the law of the land, principles of the government to uphold national interests, and protection of the rights guaranteed to every Filipino citizen.  As reflected in the Constitution, this closed session meeting circumvents the Congress’ responsibility to convene a Constituent Assembly, Constitutional Convention, or People’s Initiative where people can directly oppose charter changes.

Ultimately, this Cha Cha resolution is an attempt to relax the current Constitutional restrictions on foreign ownership of public utilities, media, natural resources, land, advertising, and educational institutions.  This only leaves the country and its citizens at the mercy of more neoliberal policies, private ownership, corruption, and foreign monopoly control resulting in outrageously high prices, low quality services, lack of transparency and accountability to everyday Filipinos.

“The biggest benefactors of this Charter Change resolution would be the foreign multi-national corporations from the US, China, and other big countries, while nationally-owned Filipino businesses would drown in a sea of foreign investors.  This back door deal is only meant to profit the Duterte regime, the ruling elite and foreign investors salivating over the natural resources of the Philippines.” said Rhonda Ramiro, Chairperson of BAYAN USA

The proposal requires a three-fourths vote from both the House and the Senate, and, if passed, it would pave the way for the Duterte regime to advance its economic provisions and attempts to change the government structure to federalism.

We must remain vigilant in monitoring and condemning any attempts by the Duterte regime and his cronies to ram forward Charter Change and undermine Philippine sovereignty.  Ramiro continued, “The traitorous Duterte has proven he leads loyalists in Congress who treat their government positions as mere tools for business transactions with wealthy elite and foreign investors, rather than honor their sworn commitment to be public servants of the people.”  There is widespread opposition to cha-cha given its immense impact on the people, politics, economy, environment, and future generations. “We can not allow Duterte to shamefully undermine the Philippine Constitution and national sovereignty. History has taught us that only the people united can hold officials accountable and topple corrupt officials like Duterte and foreign oppressors.”

BAYAN-USA is an alliance of over 29 progressive Filipino organizations in the U.S. representing students, scholars, women, workers, artists, and youth. As the first and largest international chapter of Bagong Alyansang Makabayan (BAYAN-Philippines), BAYAN-USA serves as an information bureau for the national democratic movement of the Philippines and as a center for educating, organizing, and mobilizing anti-imperialist and progressive Filipinos in the U.S. For more info, visit bayanusa.org