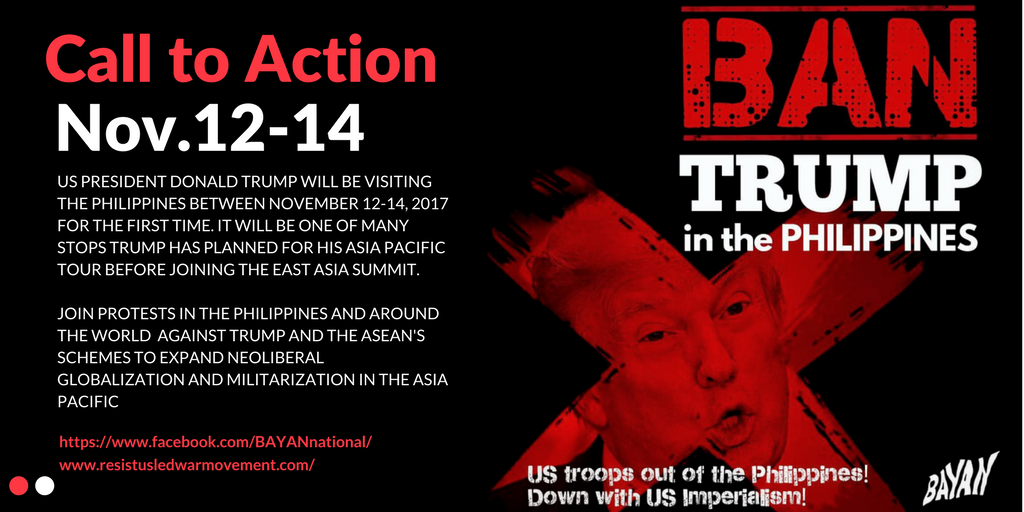 US President Donald Trump will be visiting the Philippines between November 12-14, 2017 for the first time. It will be one of many stops Trump has planned for his Asia Pacific tour as he participates in the Association of South East Asian Nations’ East Asia Summit (EAS), where leaders from 18 countries will be present– including China and Russia, US imperialism’s two main competitors–to discuss their plans for expanding neoliberal globalization and domination of the region. Underneath the summit table are trade wars, the US military pivot to Asia, aggressive expansion of China, warmongering on the Korean Peninsula, growing territorial tensions the East and South China Sea, and other local and regional issues.

To assert its own hegemony and contain China’s expansion, total defense spending of the
U.S. in the Asia-Pacific is forecast to hit US$533 billion per year by the end of the decade, up
from US$435 billion in 2015. The region will likely account for one in every three
dollars spent on defense by the early 2020s.

Meanwhile, embattled Philippine President Rodrigo Duterte will host the East Asia Summit as he chairs the ASEAN on its 50th year. Amidst his fascist wars on the poor, martial law in Mindanao, and extra-judicial killings, Duterte will play out his precarious balancing act in foreign diplomacy, which to-date has amounted to placating to foreign interests including the U.S. and China. This is a time to voice out the people’s concerns — on the world stage. This is a time for international solidarity.

This is the time to say: Resist U.S. wars! Build peace!

Join the international Call to Action against Trump’s visit to the Philippines and Asia Pacific region, the neo-liberal agenda of the ASEAN and EAS, and towards building a movement of all people who support Philippine liberation and struggle for genuine independence from US imperialism! We say US GTFO of the Philippines!

The General Union of Palestine Students

Network in Solidarity with the People of Guatemala (NISGUA)

Students for Alternatives to Militarism- Stanford

Support committee for Korean prisoners of conscience in US

The League of Filipino Students- SFSU

The United People of Color Caucus of the NLG, SF Bay Area Chapter