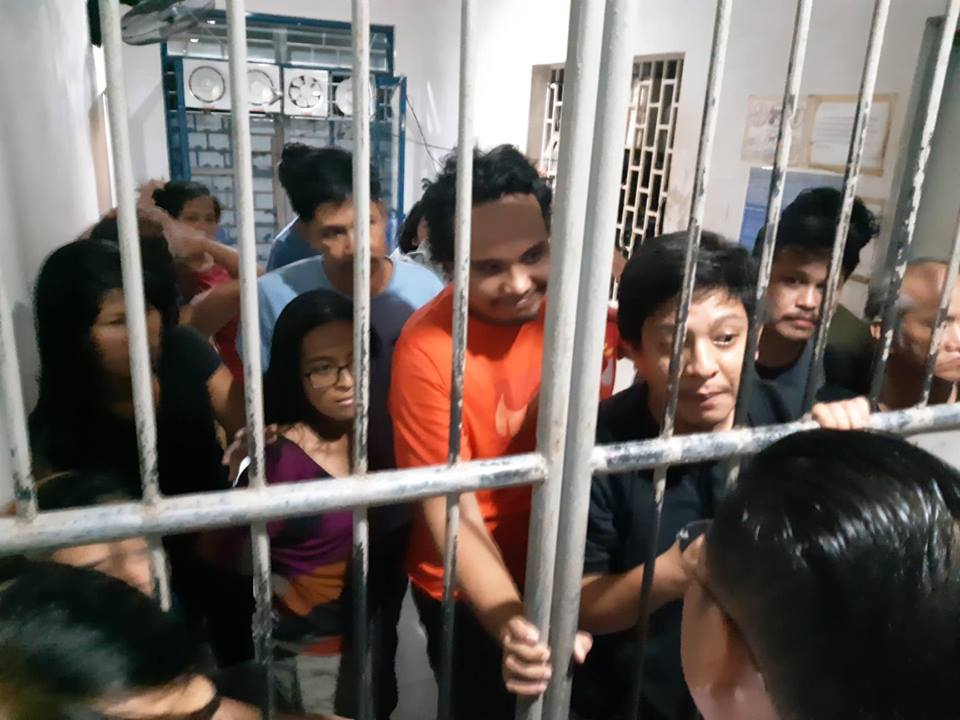 On July 30th, at around 3 p.m., around 50 security guards of NutriAsia and 20 members of Duterte’s Philippine National Police in Marilao and Meycauayan violently dispersed the workers while an ecumenical mass was being held at the picketline near the factory gates. (Source: Altermediya)

We condemn the Philippine National Police’s violent dispersal of the NutriAsia Workers’ picket line in Marilao, Bulacan, Philippines which led to the injury (inc. one elderly grandmother) and the arrest of at least 19 including several workers, youth leaders,  journalists, and supporters. They were also denied access to lawyers. Those arrested included long-time community organizers from Southern California, Eric Tandoc and Hiyasmin Saturay. As of August 1st, the 19 arrested were released based on “further investigation.” 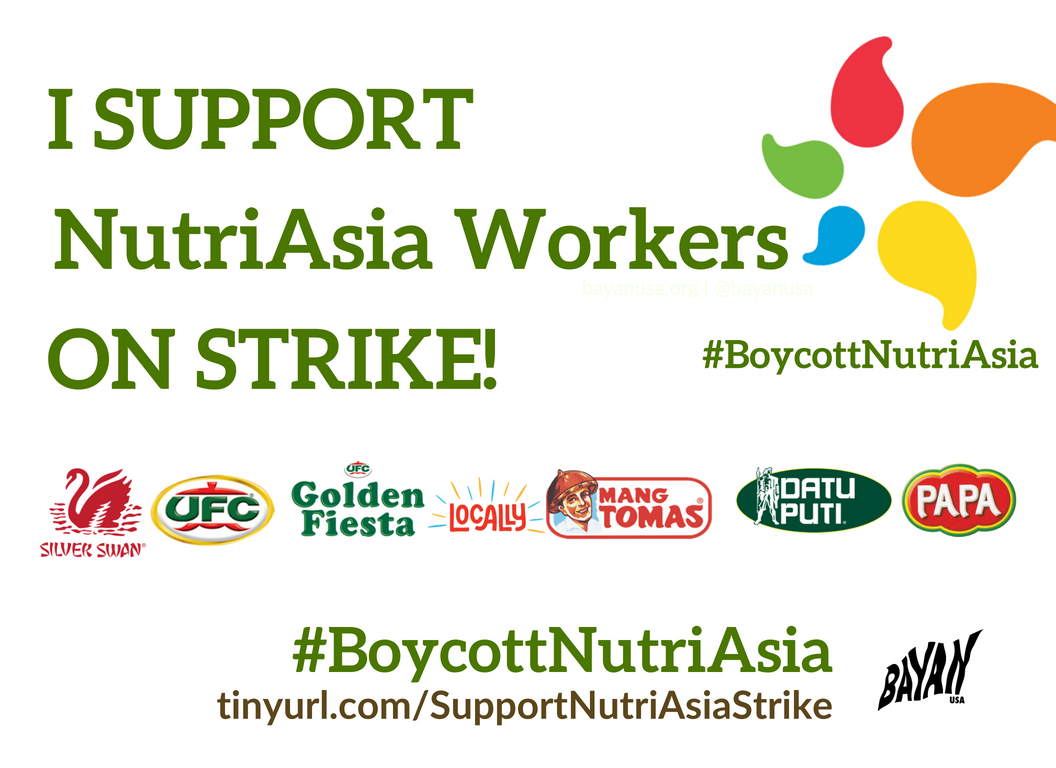 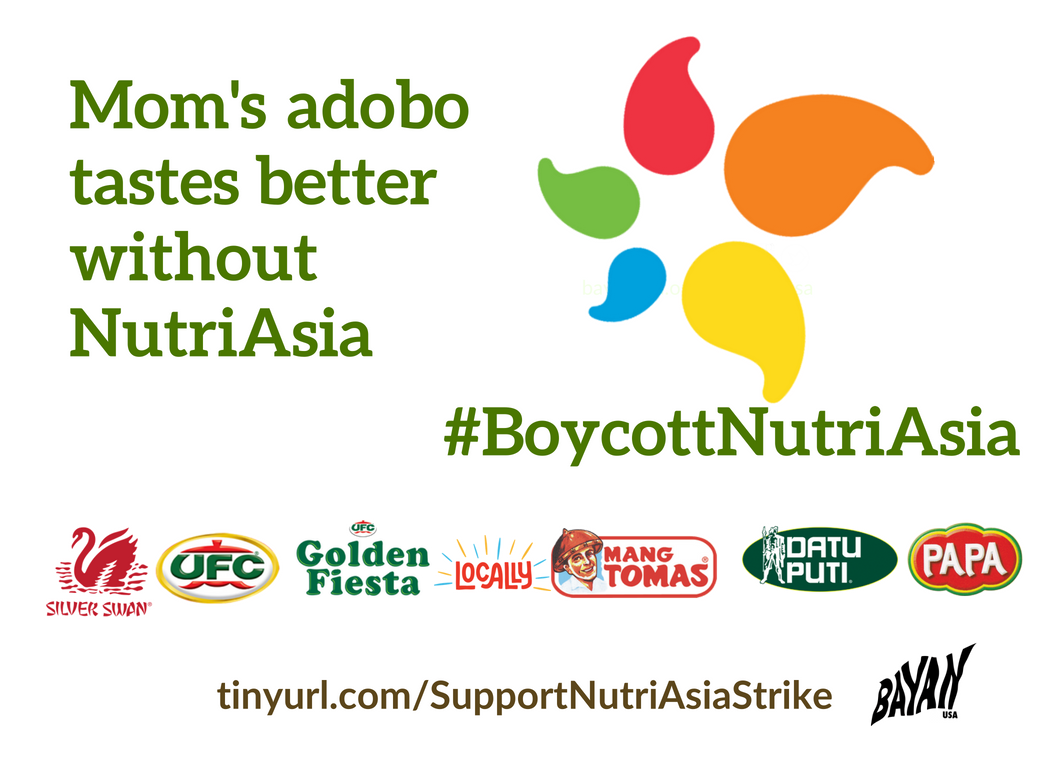 NutriAsia Inc., a multi-million dollar company based in Bulacan, Philippines, manages the production of popular condiments such as Datu Puti, Mang Tomas, Jufran, Silver Swan, Golden Fiesta, Locally, and Papa.  NutriAsia is a highly profitable company earning as much as P27 million (over $500,000) per day. Joselito D. Campos Jr., the owner of NutriAsia and CEO of Del Monte Pacific, has a family net worth of $650 million (2017).  Amongst their 1,400 workers, only 100 are considered “regular” permanent employees while a vast majority of them are considered “contractual” workers–a designation that puts them in an extremely more exploitable and unstable condition.

NutriAsia workers are forced to work for P380 ($7.11 USD) a day for an 8 hour shift, but many workers face 12-16 hour long days and dangerous working conditions.  Workplace injuries have become commonplace, with temperatures reaching greater than 100°F at their work stations, while lacking proper workplace equipment to handle products over 200°F.  Many were compelled to hide their injuries at the risk of being fired.

With the support of Kilusang Mayo Uno (KMU), Workers’ Movement for Change Federation, and Nagkakaisang Manggagawa ng NutriAsia (NMN), the NutriAsia workers have continued to organize for their rights and oppose state repression under the Duterte administration.  In May, NutriAsia Workers launched a picket line to oppose the layoff of 75 contract workers. As the strike continued in June, NutriAsia sent 300 Philippine National Police (PNP) officers to harass the workers and violently disperse them in an attempt to break their strike, resulting in 20 arrests and four people being hospitalized.  According to the International Trade Union Confederation, the Philippines has been considered one of the worst countries for workers in the world.

The NutriAsia workers, who were violently dispersed last month are still holding down their picketline. They are currently in dialogue with the management, but the management is pushing to continue production, which has been stopped since the strike started. If the company does not restart production in August, they won’t be able to produce enough of the products for the increasing demand for the upcoming months, especially the Christmas season.  There are growing concerns the management will send more police and state forces to violently disperse their picketline.

We call on all member organizations and concerned people worldwide to support the NutriAsia workers on strike and to widen the support for their struggle.

Video of Arrest of Hiyas Saturay and Eric Tandoc