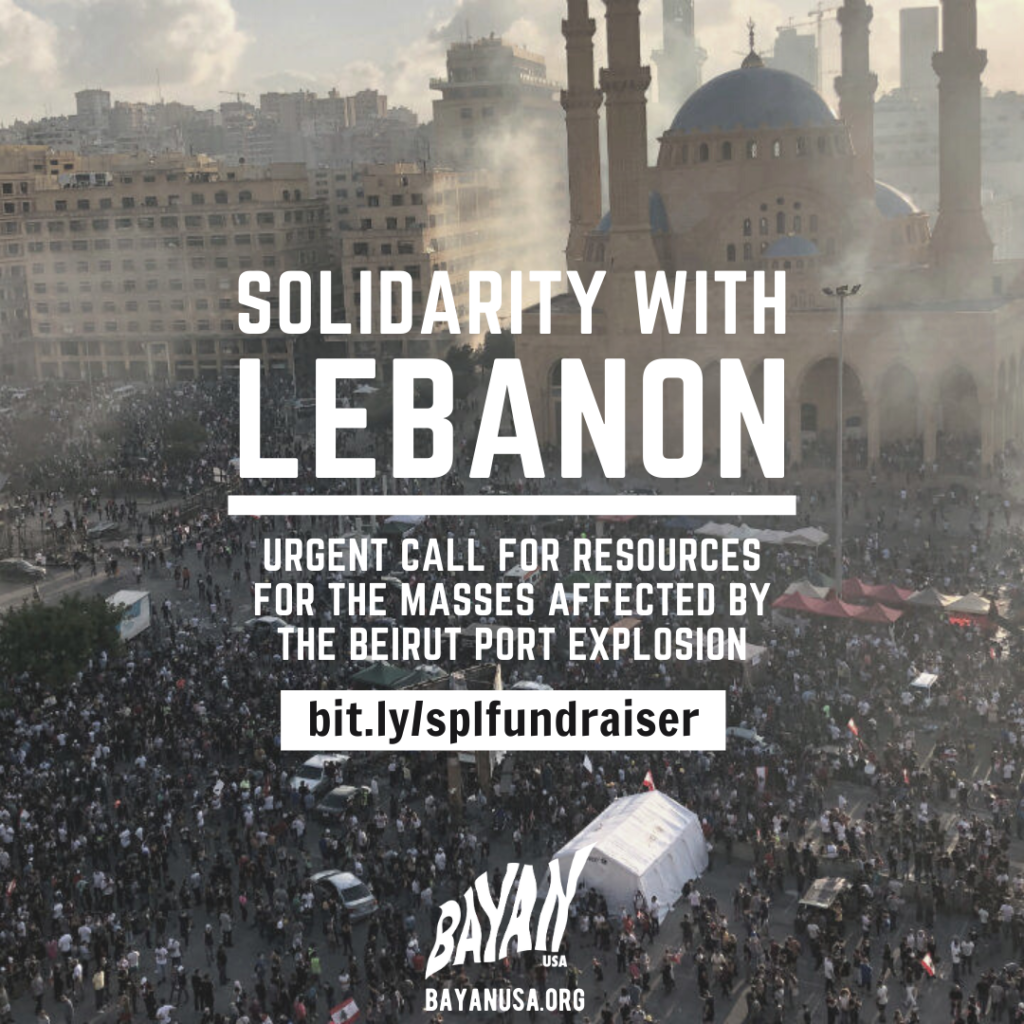 BAYAN USA extends its solidarity and support to the millions of people impacted by the August 4th explosion at one of Beirut’s main ports in Lebanon. We also pledge our unwavering commitment to struggling against the neoliberal and imperialist offensives that have plunged the Lebanese masses into economic crisis, and which compound the state of emergency brought about by this latest catastrophe.

The toll of the explosion—a result of thousands of tons of improperly stored explosive chemicals—is astronomical: over 100 people dead, the complete leveling of thousands of houses near the port and the damaging of almost a million more, and consequently hundreds of thousands left homeless. Many of those directly impacted are among the poor and working class who made the Beirut port home: fisherfolk, port workers, refugees from Palestine and Syria, migrant workers—including Filipinos—and many more.

Beyond the immediate aftermath, the catastrophe is sure to have long-term impacts on the medical infrastructure of the country, as well as Lebanon’s overall economy, which is now without one of its major ports used for importing and exporting goods. These lasting effects will mean more hardship for the Lebanese masses, as well as migrants and refugees, who will struggle to obtain medicine, food, and other commodities.

The August 4th disaster comes on top of the rapid devaluation of the Lebanese lira in recent months, in itself a result of decades of government profiteering and neglect, neoliberal attacks by institutions like the International Monetary Fund, and of course the grave recession exacerbated by the COVID-19 pandemic. The US, Israel, and NATO have all played a role in the economic strangulation of the Lebanese masses, including US sanctions targeted at Syria that also drag Lebanon into the mix.

BAYAN USA calls on its members, the Filipino community, and allies to mobilize resources for immediate relief and rehabilitation through Lebanese Popular Aid at bit.ly/splfundraiser. We must also mobilize our support to the protestors who are being violently suppressed by the Lebanese government for demanding aid, accountability, and genuine change in the wake of the explosion.

To the Philippine government, we demand that the Department of Foreign Affairs respond to those migrants and their families requesting repatriation. Beyond these immediate actions, we call on our community to continue learning about the struggle of the Lebanese people, and to organize and take action alongside them against the global plagues of neoliberalism and imperialism that deny the people’s right to safety and right to life.