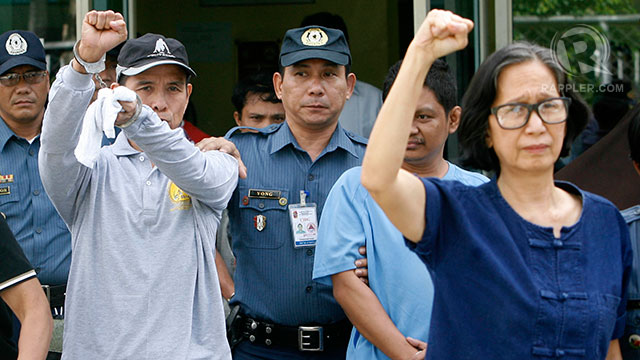 Rolling Out the Blood-Red Carpet for Obama:

Filipino American organizations under the banner of BAYAN-USA vehemently condemn the BS Aquino government for illegally arresting Wilma Austria and Benito Tiamzon, two consultants for the National Democratic Front of the Philippines (NDFP). Austria and Tiamzon are protected by the Joint Agreement on Safety and Immunity Guarantees (JASIG) while they participate in the peace negotiations between the NDFP and the Government of the Philippines (GPH), the progress of which the regime of President Benigno S. Aquino III has stalled and undermined. Coupled with the rash of extra-judicial killings of 11 activists since the beginning of 2014 and revelations of the de facto return of U.S. military bases to the Philippines as part of the Framework Agreement for Enhanced Defense Cooperation, this latest affront to human rights confirms that BS Aquino is rolling out the blood-red carpet to prepare for the late April visit of U.S. President Barack Obama.

The preamble of the JASIG reads: “The primary purpose of the safety and immunity guarantees hereby adopted are to facilitate the peace negotiations, create a favorable atmosphere conducive to free discussion, and free movement during the peace negotiations, and avert any incident that may jeopardize the peace negotiations.” Rather than pursuing the peace talks with integrity, however, the GPH has repeatedly violated the rights of NDFP consultants, negotiators, and staff through illegal arrests, torture, enforced disappearances, and killings. Currently, there are 12 NDFP consultants who are in jail for trumped up criminal charges and 10 NDFP consultants who are victims of enforced disappearances. Now, Austria and Tiamzon may face the same fate.

The NDFP, which includes the Communist Party of the Philippines (CPP) and its armed wing, the New People’s Army (NPA), has been urging the GPH to pursue peace negotiations as a path to addressing the root problems of social unrest in the Philippines. However, instead of creating and abiding by comprehensive agreements that would bring about positive socio-economic reforms for the people, the GPH has mounted a campaign to criminalize the CPP, NPA, NDFP, or any group who very openly criticizes the GPH’s anti-people policies, even aboveground grassroots people’s organizations.

The Aquino regime, now approaching its fourth year in power, fabricates the public illusion that it acts to defend human rights and punish human rights violators, justifying the violent repression of anyone involved in criticizing the government. Since 2010, when Aquino stepped into office, until the end of 2013, 169 extrajudicial killings of unarmed activists have been documented. In the first 10 weeks of 2014, 11 additional activists, farmers, and ordinary citizens have been killed.

The sharp increase of human rights violations and this shameless disrespect of the JASIG and NDFP consultants bear a clear message from the Aquino regime: the GPH is relentless in continuing its policies to quash the people’s will. This message is especially clear as the Aquino regime eagerly awaits a visit in late April by President Obama, who will embark on a tour of several Asia-Pacific countries to secure the use of their sovereign land for U.S. military bases and their cooperation with the U.S.-led free trade agreement, the Trans-Pacific Partnership (TPP). People’s organizations throughout the Philippines and throughout the world are mobilizing to oppose the U.S.’ rampant militarism in the region and its economic hegemony through the sinister implementation of the TPP, or “NAFTA on steroids.” The expansion of U.S. militarization in the region also aims to squash anti-imperialist people’s liberation movements–including the national democratic revolution of the Philippines, the longest running national liberation struggle in Asia that the U.S. and its lackeys in the Philippines have failed to crush.

In April, BAYAN-USA will join worldwide protests as President Obama seeks to proliferate U.S. imperialist gains in the Asia Pacific. At the same time, BAYAN-USA joins the progressive movement in the Philippines in refusing to be silenced by BS Aquino’s political repression and human rights violations. We condemn the GPH’s politically motivated violence against the people. We demand the immediate release of Austria and Tiamzon and demand that the GPH resume peace negotiations with the NDFP with justice and sincerity, which includes abiding by the JASIG, the Comprehensive Agreement on Respect for Human Rights and International Humanitarian Law (CARHRIHL), and all agreements previously signed by the two parties. The resumption of the peace negotiations can be a significant step toward meeting the genuine needs of the people through fundamental socio-economic reforms.

BAYAN-USA is an alliance of 18 progressive Filipino organizations in the U.S. representing youth, students, women, workers, artists, and human rights advocates. As the oldest and largest overseas chapter of Bagong Alyansang Makabayan (BAYAN-Philippines), BAYAN-USA serves as an information bureau for the national democratic movement of thePhilippines and as a center for educating, organizing, and mobilizing anti-imperialist Filipinos in the U.S. For more information, visit www.bayanusa.org

Photo: Benito Tiamzon and Wilma Austria, peace consultants with the National Democratic Front of the Philippines (NDFP), were illegally arrested last March 22 by security forces of the administration of Benigno S. Aquino III. The NDFP has been engaged in formal peace negotiations with the Government of the Republic of the Philippines on and off since 1986, when Aquino III’s mother, Cory Aquino ascended to power following the fall of the Marcos dictatorship. The peace negotiations have produced 12 binding agreements, including the Joint Agreement on Security and Immunity Guarantees (JASIG), which protects NDFP consultants such as Tiamzon and Austria from harassment and arrest. The negotiations are currently stalled.