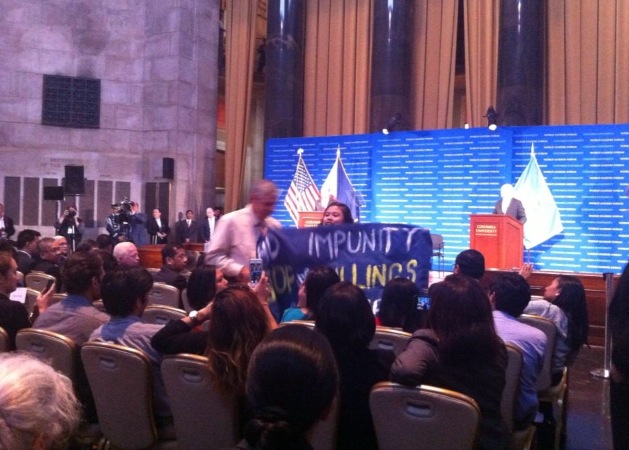 during the latter’s speaking engagement at Columbia University. Aquino was visibly

York Committee for Human Rights in the Philippines (NYCHRP), and Gabriela New

Memorial Library with questions on the pork barrel scandal, Typhoon Haiyan, and

At the same time, a rally was conducted outside in the main courtyard of the

At the forum, the questions and comments were raised on lack of adequate relief for

Typhoon Haiyan victims, and some not receiving any relief at all, after 10 months.

“Public funds for disaster relief and preparedness were slashed but the pork barrel system still continues, especially with the President’s defense of the Disbursement Acceleration Program (DAP),” stated Jenab-i Pareja of NYCHRP. 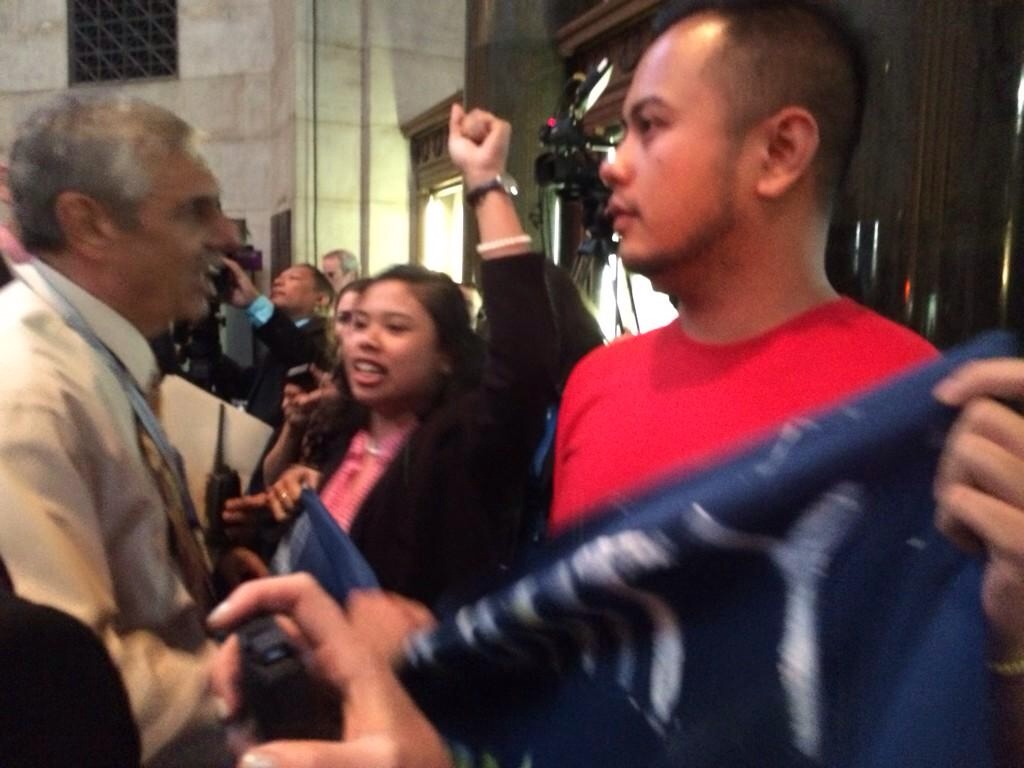 A banner reading “Oust Aquino, Pork Barrel King” was unfurled by the stage in front of the audience.

The young activists inside the library also raised the issue of human rights abuses with a banner reading “End Impunity. Stop the Killings”.

“I have been to Hacienda Luisita. I have seen first hand the continuing plight of the farmworkers, the families of the laborers of those who were massacred for wanting

to earn more than 9 pesos a day. It’s unbelievable to me that this can happen on the piece of property owned by the President’s family,” stated Joelle Lingat of

Anakbayan New Jersey, who was escorted out by New York City police after she got up and challenged Aquino on his human rights track record.

“What’s even more unbelievable was Aquino’s facial reaction to my question on Hacienda Luisita,” Lingat stated after being escorted off campus by police. “Not only did he not answer, he closed his eyes and shook his head. One audience member even told me I should be ashamed of myself. But it is Aquino who should be ashamed for dodging accountability over the massive loss of human life in his own family’s estate.”

Protesters continued to rally outside until the forum was over and Aquino left the campus.