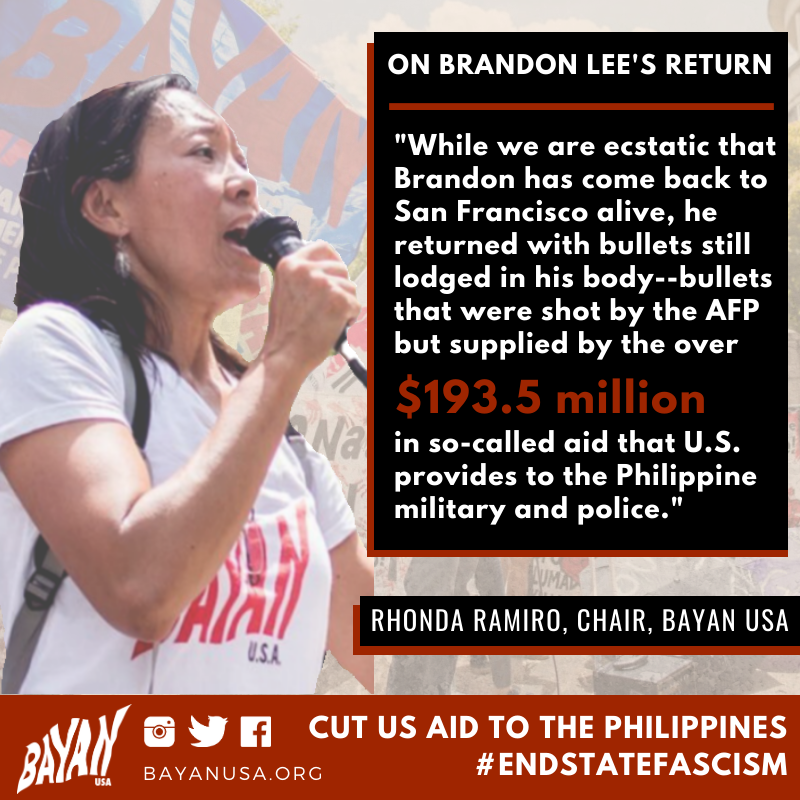 BAYAN-USA is overjoyed to welcome Brandon Lee safely back to the United States after his medical airlift from the Philippines to San Francisco, CA. Brandon’s return was made possible by his courageous will to survive, and the outpouring of public support to save his life after he was shot by the Armed Forces of the Philippines (AFP) 54th Infantry Battalion in the Cordillera region of the Philippines on August 6, 2019.  We thank everyone who contributed to his safe return through donations, fundraising events, phone calls to government officials, educational efforts to raise awareness of the human rights situation in the Philippines especially under the US-Duterte regime, and organizing to save Brandon Lee and hold his perpetrators accountable. We must continue the campaign to ensure the safety of Brandon and his family and for his full recovery.

“While we are ecstatic that Brandon has come back to San Francisco alive, we are dismayed that he returned with bullets still lodged in his body–bullets that were shot by the AFP but supplied by the over $193.5 million dollars in so-called aid that U.S. provides to the Philippine military and police,” said Rhonda Ramiro, BAYAN-USA Chair.  “As Filipinos in the United States, we must hold accountable both the Duterte regime, which is hunting down environmental activists and human rights defenders like Brandon, and the U.S. government, which is funding, equipping and training the death squads of Duterte and other fascists around the world. The U.S. knowingly supplies this aid to Duterte despite the over 30,000 people killed in his drug war, the more than 30 environmental defenders slaughtered in 2018 alone, and the 400 farm workers, faith leaders, lawyers, trade union organizers and other human rights defenders like Brandon who have survived assassination attempts by the Philippine military, police and paramilitary units,” stated Ramiro.

The level of impunity has risen to new heights under the Duterte regime. De-facto martial law blankets the whole country under the U.S.-designed counterinsurgency program Oplan Kapanatagan and Executive Order 70, which implements a “whole of nation” approach to suppressing the movement against Duterte. “‘Whole of nation’ means weaponizing the government’s entire civilian bureaucracy, treating unarmed civilians and activists like Brandon as combatants, turning health and social services into intelligence-gathering mechanisms, turning overseas embassies and consulates into Philippine police outposts, turning schools and hospitals into military encampments,” continued Ramiro. “We are thankful that Brandon is a survivor and not yet another person added to the death toll under the U.S.-Duterte regime. It took a movement of people from all walks of life to save Brandon Lee, and it will take a movement to change the rotten system in the Philippines into one that Brandon was fighting alongside the Filipino people for–one that provides genuine freedom and democracy, one that truly benefits the whole country,” ended Ramiro.

(For US $ aid See ICHRP reference)