From the Philippines to Ferguson: Resist State Repression, Fight for Liberation! 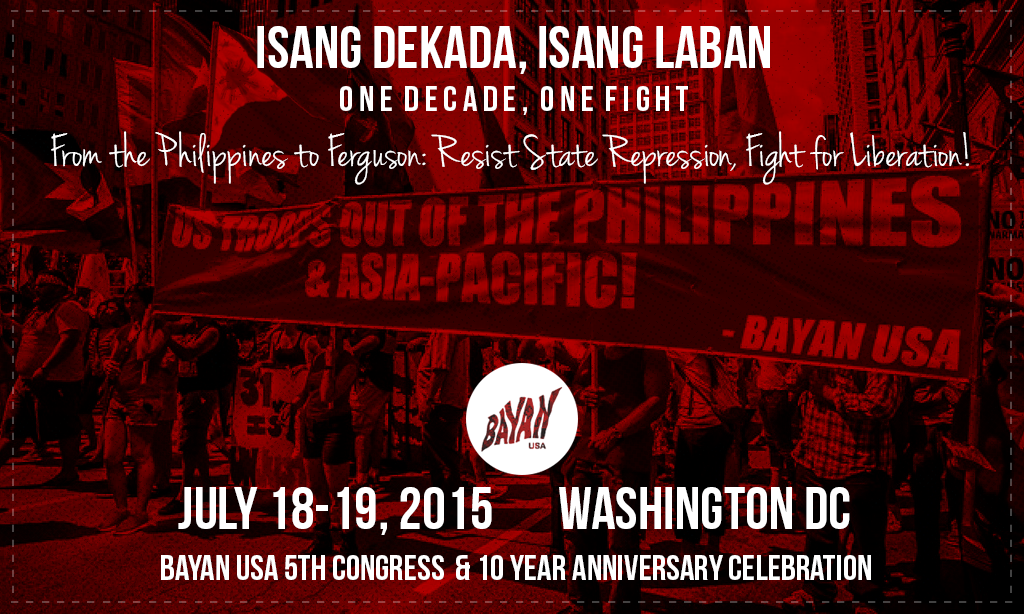 This 2015, BAYAN USA commemorates its 10 year anniversary by reaffirming its commitment to fight against state-sponsored repression and for national and social liberation from US imperialism, both in the Philippines and the US.

This year marks 10 years since the founding of the US Chapter of BAYAN USA, the oldest and largest overseas chapter of BAYAN Philippines, and one of the largest progressive alliances of Filipino-American organizations.  Founded in 2005 during the blood-stained peak of the Bush-Arroyo regime’s Global War on Terror and US-backed counterinsurgency program “Operation Plan Bantay Laya/Freedom Watch” in the Philippines, BAYAN USA has grown to be a leading critical voice and center for educating, organizing, and mobilizing the broadest ranks of Filipinos and allies in the US for freedom and democracy in the Philippines, the Philippine diaspora, and for racial, economic, and social justice in the US.

Down With the US-Aquino Regime!

The US-Aquino regime not only continues the anti-people and repressive policies of its predecessors, it is actively facilitating the increased US military presence and intervention in the country as part of the so-called Asia Pivot. The murder of Jennifer Laude and the subsequent refusal of the US to surrender custody of Marine Pfc. Joseph Scott Pemberton, the US serviceman formally charged with her murder, are just the latest in a long, historical pattern of reactionary violence committed by US military personnel against Filipino civilians with no repercussions.  This adds fuel to the fire of the perennial demand for genuine national sovereignty and territorial integrity of the Philippines.

Despite riding onto the presidential office on the coat-tails of his family name, Benigno Simeon Aquino III demonstrates again and again his failure and insincerity when it comes to alleviating the poverty and misery the majority of Filipinos suffer, and what drives over 4,500 Filipinos to leave the country every day in search of a means to survive. Not only have poverty and landlessness, especially for victims of typhoons such as Haiyan and Pablo, worsened under Aquino, but rampant government corruption continues with impunity.  Any opposition to the status quo is met with repression, as witnessed by the 491 political prisoners, 226 extrajudicial killings, and 26 forced disappearances of activists who dared to fight for the poor. BAYAN-USA is one with the masses who know the only solution is to force a seachange in the entire system, starting at the top with Aquino.

Solidarity for Black Self-Determination & All Oppressed Communities in the US!

In the US, Filipinos are an ethnic minority with a long history of resistance and struggle for racial and economic justice beginning as early as the turn of the 20th century during the formal US colonial period of the Philippines. As an immigrant community of color, we understand wars of aggression, militarism, state violence, white supremacy, labor exploitation, and racism from the receiving end. This has compelled Filipino-Americans to contribute greatly to the labor, immigrant rights, and racial and economic justice movements in the US.

BAYAN USA sees the self-determination of Black people, migrant workers, and all other oppressed communities in the US as crucial to our liberation as a people as well, and decisive in the struggle for freedom and democracy within US borders. BAYAN-USA must contribute to the legacy of our elders and ancestors, by vastly expanding our ranks and engaging our members in shared struggle with allies against a common enemy.

With over four million Filipinos in the US, we are the largest concentration of Filipinos living outside the Philippines. Sending over 60% of the estimated $20 billion in US dollar remittances from overseas Filipinos to the Philippines annually, we keep the Philippine economy afloat. Such economic power must translate to political power. As immigrants and migrant workers, we are justified in criticizing and speaking out against the Philippine government’s failed economic policies precisely because of our forced migration and its impact on our families. While the Philippine government continues in its downward economic spiral, the migrant and immigrant movement grows in strength and numbers, keeping our eyes on the prize of genuine Philippine liberation, and the right to return Home or to freely choose to migrate .

BAYAN USA is an integral part of the larger, national struggle for freedom and democracy in the Philippines. As an alliance based in the US, BAYAN USA must also live up to its responsibility to play a great role in strengthening and contributing to the anti-imperialist struggle in the US. We understand that while the two countries are on separate hemispheres, the shared struggle of the Filipino people and oppressed peoples in the US is rooted in the same rotten global monopoly capitalist system. We celebrate our 10 years in the National Democratic movement by dedicating ourselves to building and strengthening solidarity ties between peoples in the Philippines and the US, and to do our part to advance the worldwide movement against US imperialism.

Long Live the National Democratic Movement of the Philippines with a Socialist Perspective!

Continue the Struggle for Genuine Agrarian Reform and National Industrialization!