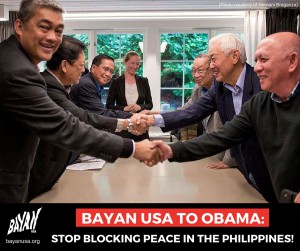 BAYAN-USA to Obama Administration: Stop Blocking Peace in the Philippines

Let the talks begin! With hopeful anticipation, Filipino Americans under the banner of BAYAN-USA join the Filipino people in congratulating the incoming peace panel of President-Elect Rodrigo Duterte and the National Democratic Front of the Philippines in reaching an agreement to resume peace negotiations in July.  Forged during exploratory talks in Oslo, Norway, the two parties released a joint statement on June 16, 1 AM Manila time stating their intention to begin peace talks during the third week of July this year.  If followed through, this bold step could be the first along the path to resolving the roots of the civil war in the Philippines.

At the same time, BAYAN-USA condemns U.S. imperialism’s planting of landmines on the Filipino people’s road to peace.  The U.S. State Department recently reconfirmed the Communist Party of the Philippines and New People’s Army on its Foreign Terrorist List, in an apparent move to block the talks before they even begin. The U.S. Defense Department is also speeding forward with plans to populate at least five military bases throughout the Philippines, despite protests by local residents against American boots on the ground. The U.S. Congress approved an increase in this year’s Foreign Military Financing allocation to the Philippines, funding the reactionary Armed Forces responsible for committing heinous extrajudicial killings, torture, and other human rights violations with impunity under the discredited counterinsurgency program Operation Plan Bayanihan. The Obama-backed Trans Pacific Partnership Agreement will devastate the economies of the Philippines and its neighbors with its neoliberal economic measures, further entrenching the mal-development and poverty at the root of the armed conflict between the Philippine government and the revolutionary forces. Every action of the U.S. government lays bare its hypocrisy in preaching peace while pushing war.

The Filipino people have no illusions as to the intentions of U.S. imperialism. The military and economic agreements between our countries since so-called independence in 1946 have always been designed to ensure the Philippines’ continued subservience to imperialism’s dictates.  And counterinsurgency programs from Oplan Katatagan under the dictator Ferdinand Marcos to Oplan Bayanihan under B.S. Aquino have all been constructed by the U.S. and implemented by its puppets to quell resistance to the US imperialist agenda.

These maneuvers to keep the Philippines dependent, impoverished and unstable are in line with the long history of US intervention and aggression throughout the world and even within its owns borders. To consolidate and expand its economic and geopolitical dominance, the U.S. has backed coups in Chile, Honduras, Haiti, Venezuela, and many more countries, alongside wars of aggression in countries such as Vietnam, Afghanistan, Iraq, and others.  There is the double-talk of ‘brokering’ peace between Palestine and Israel, while zealously financing and protecting the Zionist state. The U.S. conducts extraordinary rendition and extra-judicial assassinations to deal with individuals it unilaterally deems troublesome.  And the U.S. unleashes its state apparatuses to contain in jails, assassinate on the streets, mire in poverty, deport at the borders, and eject from communities the black and brown people who rise up against imperialist exploitation.

Yet, no matter what form the attacks take, the resistance continues worldwide. As much as we share the common history of struggle against U.S. intervention and aggression, the people of the Philippines and the world share the common goal of having peace with justice. We all stand to gain if the peace negotiations can proceed and succeed in addressing the roots of the civil war in the Philippines.  BAYAN-USA pledges to continue organizing and mobilizing to clear the U.S.’s roadblocks to the peace negotiations and to build the mass movement for genuine, lasting change in the Philippines. We call on our allies in the U.S. to join us in pushing for de-listing of the CPP-NPA from the State Department’s FTO list; the withdrawal U.S. military troops and advisors from the Philippines; the nullification of the Enhanced Defense Cooperation Agreement and Visiting Forces Agreement; and the elimination of aid to the reactionary Armed Forces of the Philippines.

BAYAN-USA is an alliance of 20 progressive Filipino organizations in the U.S. representing students, scholars, women, workers, artists, and youth. As the first and largest international chapter of Bagong Alyansang Makabayan (BAYAN-Philippines), BAYAN-USA serves as an information bureau for the national democratic movement of the Philippines and as a center for educating, organizing, and mobilizing anti-imperialist and progressive Filipinos in the U.S.  For more information, visit www.bayanusa.org