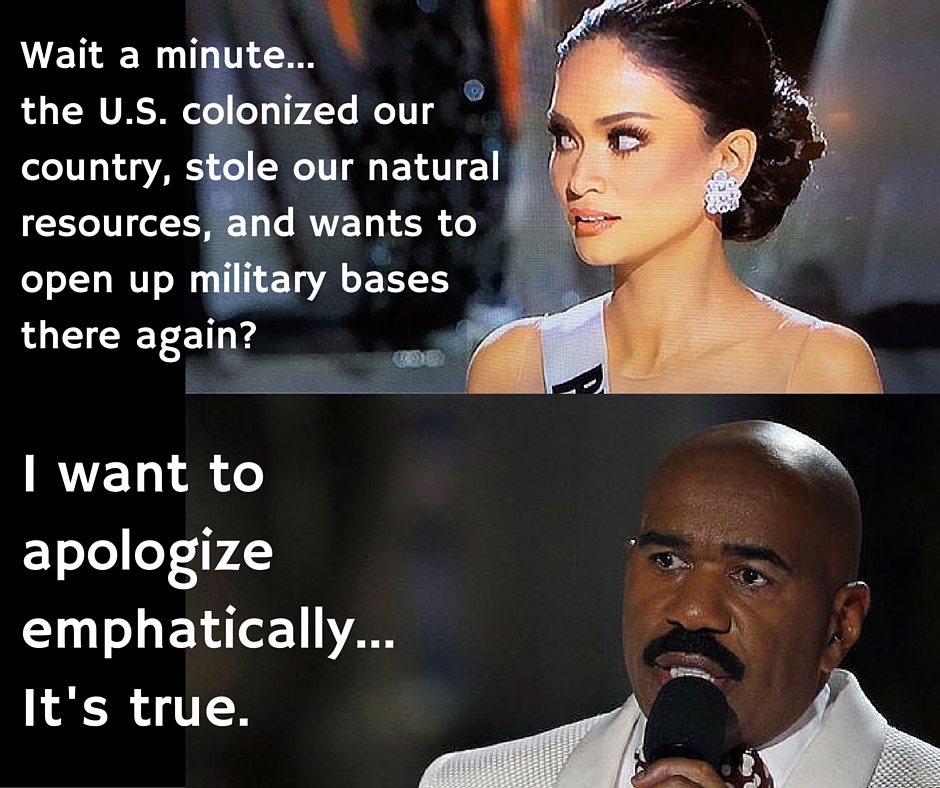 BAYAN USA recognizes the worldwide celebration of Filipinos and global citizens over Miss Philippines Pia Alonzo Wurtzbach winning the Miss Universe competition last weekend. Seeing a fellow kababayan put up on an international pedestal as an icon of beauty naturally elicits national praise and admiration, especially in a world where mainstream media has very few depictions of Filipinos, particularly Filipina women, apart from Westernized and colonial standards of what is beautiful and what is nationalist.

The Miss Universe pageant is also a multi-billion dollar US corporate media franchise that ultimately serves the interest of the US elite. It also upholds the prevailing media norm of commodifying women. In this context, we see the pageant’s preliminary question and answer portion as a tool maximized by the media to advance the US imperialist agenda of consolidating its control over the Philippines; the pageant opportunistically pushed a moment in which the re-establishment of US military bases would be promoted positively on a highly visible and global platform.

Contrary to views that this was just an isolated expression of one individual’s opinion, this very public and globally-televised moment that reached tens of millions of viewers comes at a time when the impact of US military presence in the country is under international scrutiny with the recent Philippine court conviction of US Marine Joseph Scott Pemberton for killing Filipina transgender Jennifer Laude in Olongapo City last year. The Obama administration’s subsequent refusal to surrender Pemberton to Philippine authorities to serve his sentence is likewise sparking protests both in and outside of the Philippines and directly points to the unequal relationship and framework imposed by the US-crafted Visiting Forces Agreement.

This moment also comes at a time when a strong movement for genuine Philippine sovereignty is surging all over the country, pressuring Philippine parliamentarians to file a petition with the Philippine Supreme Court last year against the Enhanced Defense Cooperation Agreement or EDCA. The EDCA, a newly-signed defense pact between both the Obama and Aquino governments, will allow for the building of US military facilities and operations in the country, despite a 1987 constitutional clause that prohibits foreign military basing and combat operations in the country.

In 1991, the Philippine Senate, compelled by a decades-long people’s movement for genuine national independence, voted to shut down the former permanent US military bases in the country. They cited the presence of a US military base and US military personnel were not only vestiges of US colonial rule, but undermining Philippine sovereignty.

Revisit our country’s history, especially our country’s historical relationship with the United States beginning at the turn of the 20th century. Learn more about the historical impacts of US war and military intervention in our country, including the accounts of gross human rights abuses by the hands of US servicemen on our kababayan. Look into the cases of Filipina women like the rape of Suzette “Nicole” Nicolas and the killing of Jennifer Laude, and the young children used as target practice by US servicemen near Subic Naval and Clark Air Bases before they were shut down. As a person in a very public position representing the Philippines, use your voice and position to not only raise our country’s visibility to the world, but to celebrate genuine Filipino nationalism through advancing our continuing people’s movement for national sovereignty.

###
BAYAN-USA is an alliance of 20 progressive Filipino organizations in the U.S. representing youth, students, women, workers, artists, and human rights advocates. As the oldest and largest overseas chapter of Bagong Alyansang Makabayan (BAYAN-Philippines), BAYAN-USA serves as an information bureau for the national democratic movement of the Philippines and as a center for educating, organizing, and mobilizing anti-imperialist Filipinos in the U.S. For more information, visit www.bayanusa.org.