BAYAN-USA condemns the shooting of Brandon Lee, Cordillera Human Rights Alliance’s paralegal volunteer and provincial human rights officer in Ifugao, on August 6 in Lagawe, Ifugao leaving him seriously injured. This attack is part of a spate of attacks on human rights defenders targeted by the U.S.-Duterte regime in its attempts to violently silence all opposition. It was Lee’s dedication to seeking justice for victims of human rights violations and for the rights of indigenous peoples, farmers and peasants that drew the attention of the fascistic government, specifically by the 54th IBPA who had already been surveilling, threatening and harassing him prior to this incident. This attack hits particularly close to home for BAYAN-USA, as Lee was a member of our alliance and several other community organizations in the U.S., serving as a volunteer staff member of the BAYAN-USA Northern California region before his commitment to his new family as well as serving the cause of justice and genuine peace drew him to relocate to the Philippines in 2010.

According to CHRA, this was not the beginning: “In 2015, the Cordillera Human Rights Alliance with other human rights organizations submitted a position paper to the United States Congress’ Tom Lantos Human Rights Commission in Washington, D.C. One of the cases cited was the death threats Brandon Lee received as a human rights worker in Ifugao. That year, Brandon and other IPM leaders and members were sent a photo of an Ifugao burial blanket with messages that they will face the same fate as human rights worker, William Bugatti who was extrajudicially killed in March 2014.”

We believe this is no coincidence and that elements of the State security forces or agents are responsible for Lee’s shooting. This heinous attack was committed under Duterte’s Executive Order 70, which institutionalizes a “whole of nation” approach within his counterinsurgency program Oplan Kapanatagan purportedly aimed to crush the “communist insurgency.” However, what the shooting of Lee exemplifies and fact finding missions by human rights organizations have found is a dramatic increase in violent attacks against legal organizations such as Karapatan, BAYAN, Cordillera Human Rights Alliance, among many others.  Just recently there has been a spate of killings in Negros Oriental, reaching up to 48 extrajudicial victims recorded this year.

We call on all people who believe in human rights to join us in condemning this violent attack on Brandon Lee and all human rights defenders in the Philippines and hold the government accountable, specifically the State security forces that the Duterte administration has let loose in the Cordillera region – the 54th IBPA, the 5th Infantry Division of the Philippine Army and the Northern Luzon Command.  These attacks on human rights defenders and legal organizations need to end. The real threat to Philippine peace and security is the President himself and the state forces in his command. They are the real perpetrators of the rampant violence, chaos and growing poverty in the country and if we allow his Presidency to continue it will only get worse.

Please make a donation to support Brandon and his family for the cost of medical expenses and other expenses that may accrue. 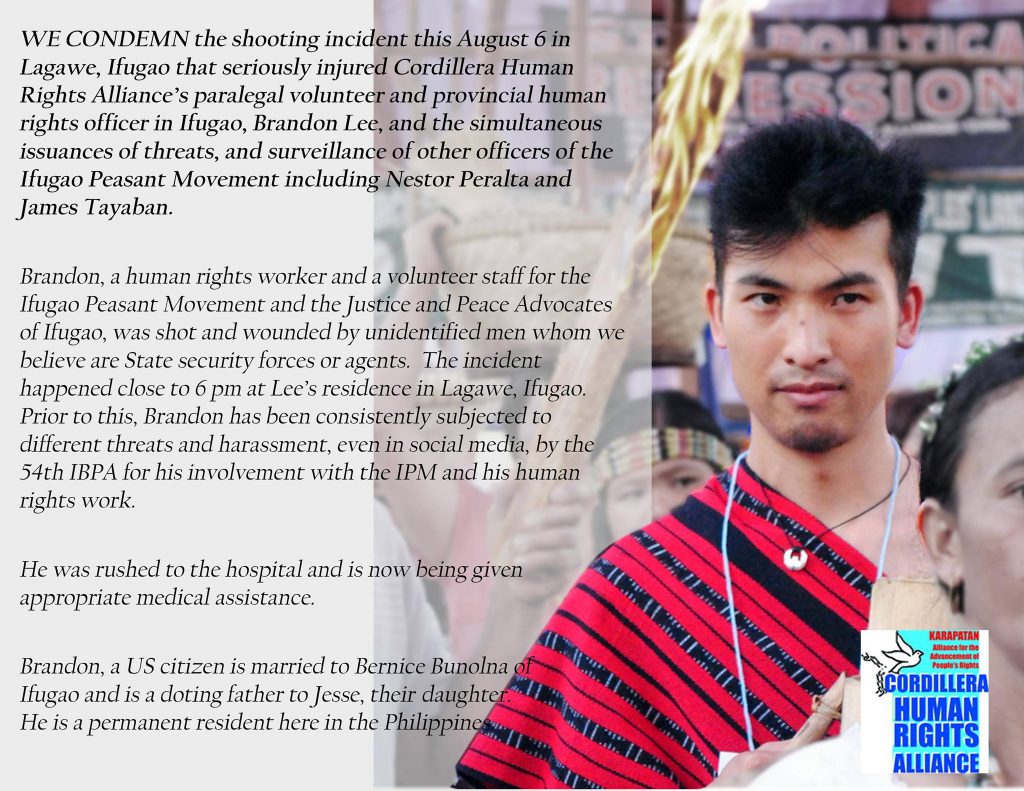