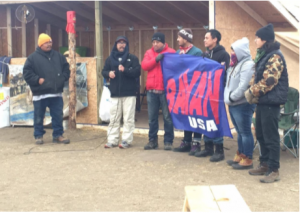 Photo Caption: BAYAN USA members and delegates recently traveled to Standing Rock this
past November to express solidarity and support for the water protectors.

BAYAN USA, an anti-imperialist alliance composed of 20 progressive Filipino organizations in the U.S. representing students, scholars, women, workers, artists and youth, applauds the water protectors of Standing Rock in their struggle against corporate plunder and greed. From September-December 2016, BAYAN-USA members from Southern California, Northern California, the Pacific Northwest, and Chicago traveled to North Dakota to take action in solidarity with the water defenders at Standing Rock. The unrelenting fight of the Standing Rock Sioux, along with other indigenous nations and their allies, to stop the construction of the Dakota Access Pipeline is a testament to the collective power of the people to resist and beat back corporate plunder and greed. BAYAN-USA salutes the historic gathering of over 600 indigenous nations and their supporters: as many as 10,000 people at a time camped in prayer and action in arduous struggle against the pipeline.

The Dakota Access Pipeline, or DAPL, is a $3.7 billion pipeline project that aims to transport crude oil from North Dakota, South Dakota, Iowa to Illinois. The pipeline, which travels through approximately 50 counties, was originally planned to go through the capital of North Dakota, Bismarck, which is north of the Standing Rock reservation. The pipeline was rerouted after the community voiced concern regarding its threat to the water supply. However, when the Sioux Tribe objected this rerouting to the boundary of the Standing Rock reservation, their petitioned was ignored. The pipeline will threaten the main water supply of the reservation and ancestral land.

This unjust trend of trampling indigenous peoples rights – particularly the right to free prior and informed consent – by military and corporate interests is something that the Filipino people know all too well. The Lumad people of the southern Philippines have been engaged in many parallel struggles to the Standing Rock Sioux for their rights to ancestral land and clean water. They face paramilitary death squads and the Philippines military, who act as the servants of multinational mining and logging corporations much like the Morton County Sheriff Department and the armed security of DAPL in North Dakota. Also like the indigenous people of North America, they stand united and refuse to be intimidated by state and corporate violence in their undying determination to liberate their land and their people from the forces of capitalist exploitation.

On Thanksgiving Day November 24, 2016, a day when the United States celebrated a contrived story of friendship between Native Americans and the Pilgrims, the U.S. Army Corps of Engineers notified the water protectors that they were to evacuate the camps by December 5. However, on December 4, the Army Corps of Engineers released the decision to deny DAPL the easement needed to legally drill under lake Missouri River and complete the pipeline, temporarily halting the project. This decision is a result of the people’s collective action!

However, the fight is not yet won. Despite the denial of the easement to continue drilling, DAPL has announced that they will proceed as planned and pay a daily fine. The water protectors will remain camped at Standing Rock to resist DAPL until its final defeat, and BAYAN USA will continue standing in solidarity with them until victory and beyond. From the Philippines to Standing Rock: Water is Life, Land is Life, Fight for Self-Determination!