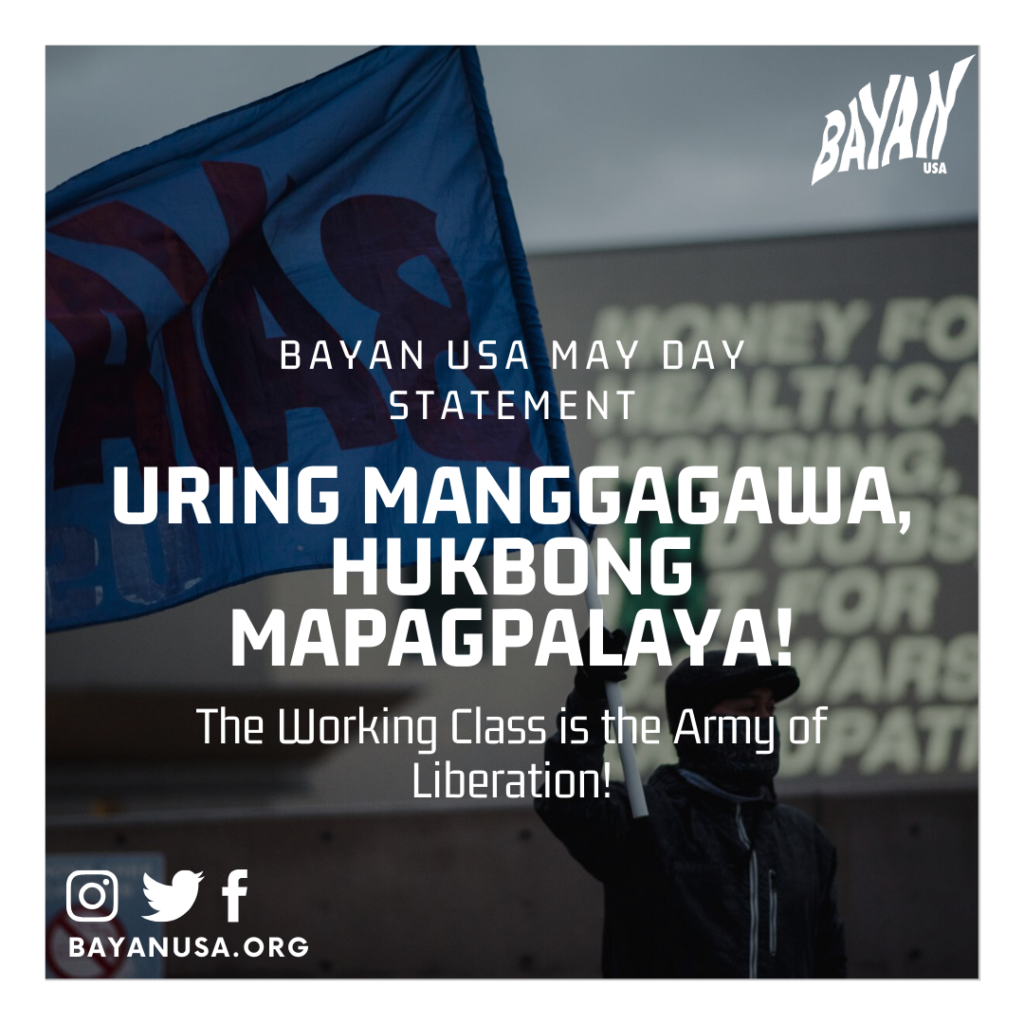 Amid the COVID-19 pandemic, BAYAN USA celebrates International Workers’ Day by joining the surge of people around the world rising up against neoliberalism and imperialism, which have once again not only failed to protect humanity’s basic right to life, but have exploited the situation to attempt to further the interests of the ruling class. The pandemic has laid bare the contradictions of imperialism: our society depends on the labor of the working class and poor, yet the wealth they generate in the things they create and services they provide—including personal protective equipment (PPE), ventilators, clean hospitals, stocked grocery shelves, and so much more—remain in the hands of the ruling elite. We also see the utter failure of neoliberalism and the anarchic, privatized mode of production in safeguarding the rights, health, and safety not just of workers, but of society in general. In the face of this global crisis, we are determined to build the anti-imperialist movement more resolutely than ever before, and further advance the national democratic movement in the Philippines as our biggest contribution to the downfall of imperialism.

Worldwide, workers are facing the brunt of the pandemic, including workers in the US who endure extreme suffering under the failed response of the Trump administration. The majority of Filipinos are part of that very same international working class, especially in the healthcare industry. Filipino caregivers, custodial staff, dialysis technicians, and many others are not prioritized to receive PPE, and in many cases do not even receive hazard pay despite being on the frontlines. Filipino professionals employed as nurses and doctors are similarly being worked to exhaustion without adequate safety measures. So far, there have been at least 9,000 cases of COVID-19 among health care workers and 27 reported deaths. Their employers and government agencies are asking them to make extraordinary personal sacrifices rather than shoulder the responsibility to ensure their well being and that of the general public.

Filipino migrant workers, among them seafarers and J-1 workers, are further neglected. The Filipinos working on the over 100 cruise ships near US ports and waters are extremely vulnerable. Most recently, over 600 Filipino workers were trapped on the coronavirus-stricken Grand Princess cruise ship. They were denied immediate disembarkment, access to mass testing, and safe quarantine when the ship docked in Oakland, CA in March, which resulted in the death of one crew member from COVID-19. J-1 visa holders have been similarly neglected by their hosts, visa sponsors, recruitment agencies, and the US and Philippine governments. Here for “training” and “cultural exchange,” J-1 workers have instead experienced mass lay-offs upon the closure of the hotels and restaurants they were employed by, and are struggling to pay for food, rent, and plane tickets back home.

The experience of Filipino workers in the US is bound to the root problems in the Philippines that force millions to go abroad—namely, the lack of national industry and an outmoded agricultural system that perpetuate poverty. Decades of labor export facilitated by the Philippine government have sent tens of millions of people abroad to work in healthcare, seafaring, and guest worker programs like the J-1 program. However, the Philippine government denies these overseas workers the help they deserve. The Philippine government refused Grand Princess cruise ship workers the right to mass testing once repatriated, putting them and their families at risk of contracting COVID-19. Likewise, the government, through its consulates and embassy in the US, have failed to disperse its Assistance to Nationals fund for J-1 workers’ immediate needs.

In the Philippines, Duterte has made it clear that to be poor is a crime. His focus on military “solutions” to the pandemic rather than medical and welfare solutions has made it impossible for the masses of working people to survive. Out of the two million workers displaced because of the pandemic, only 300,000 have been given financial aid. Those who take matters into their own hands to assert the right to necessary relief, including urban poor residents of San Roque and even relief volunteers of Kilusang Mayo Uno, are met with harassment, terrorist-tagging, and arrest. The anti-people rhetoric and actions of the Duterte regime are culminating toward the possible declaration of a de facto martial law, as confirmed through leaked military documents. Such drastic and inappropriate measures will surely cost more lives than protect.

And yet despite the massive weight that this crisis has forced upon the world, faced with the options to lose hope or to fight, the masses are overwhelmingly choosing to fight. Health workers are launching actions and strikes across the US. Seafarers have pushed their demands forward to their employers and the Philippine government, and hundreds of J-1 workers in the US have formed a national network to do the same. Even in the Philippines, where the threat of martial law looms on the horizon, the labor movement is gearing up for creative May Day protests to demand guaranteed income, sufficient food supplies, free testing and treatment, and respect for people’s rights and welfare.

In this pivotal moment, BAYAN USA calls on Filipinos across the United States to join the struggle of the working masses to fight not only for our immediate needs, but for a new society that will guarantee the health and well-being of the majority. Our first steps toward this must be to build the broadest movement against the US-Duterte regime and any threat of martial law, and against imperialism and neoliberalism as a whole. Combined, these dangers pose an immediate risk to our lives and jeopardize our future even more than COVID-19. This May Day, alongside our calls for guaranteed incomes, health, and overall livelihood, let us also advance the call to oust the US-Duterte regime and towards building a genuine socialist future.

Workers of the world unite!

The workers united will never be defeated! 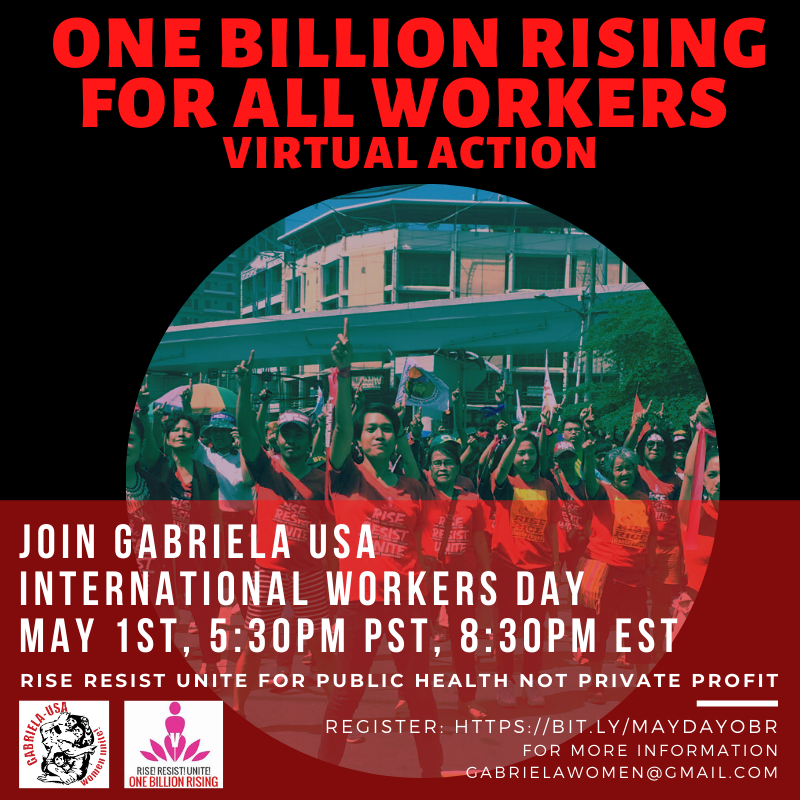 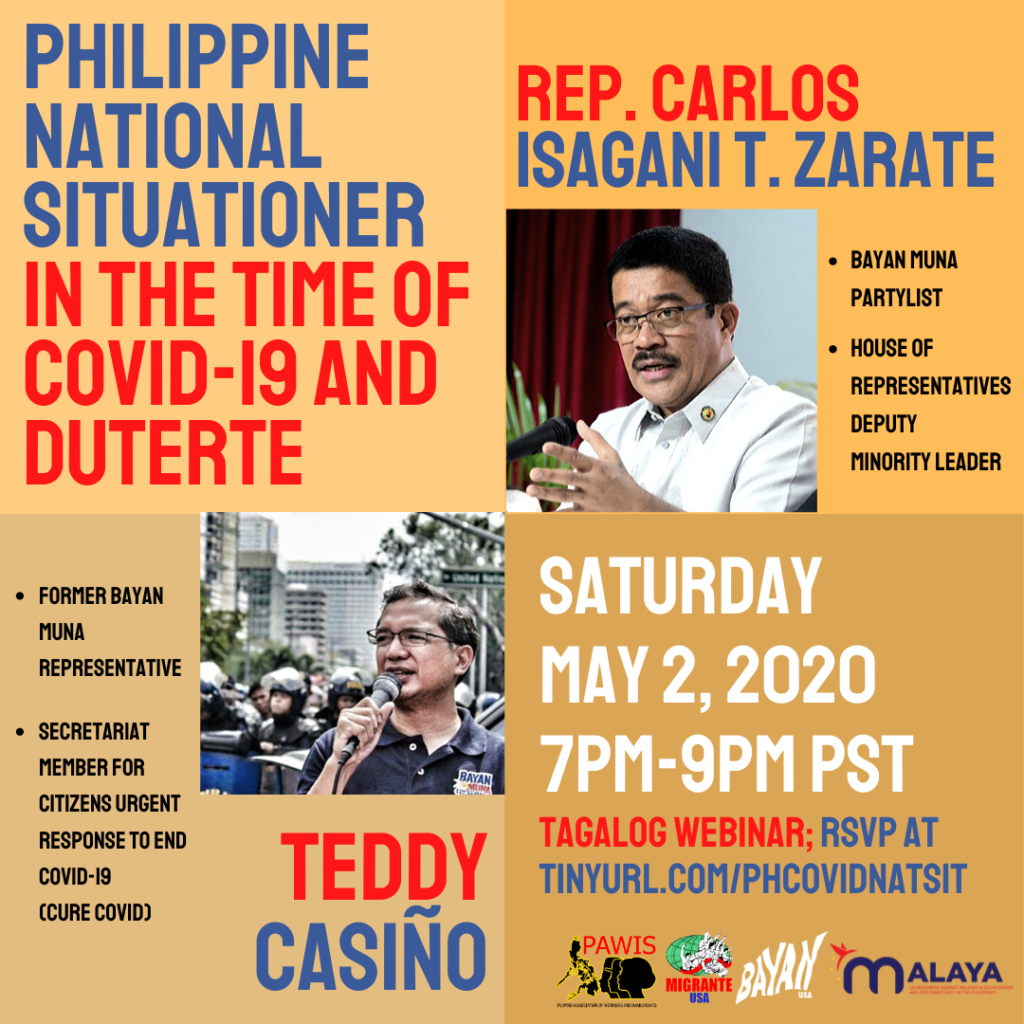