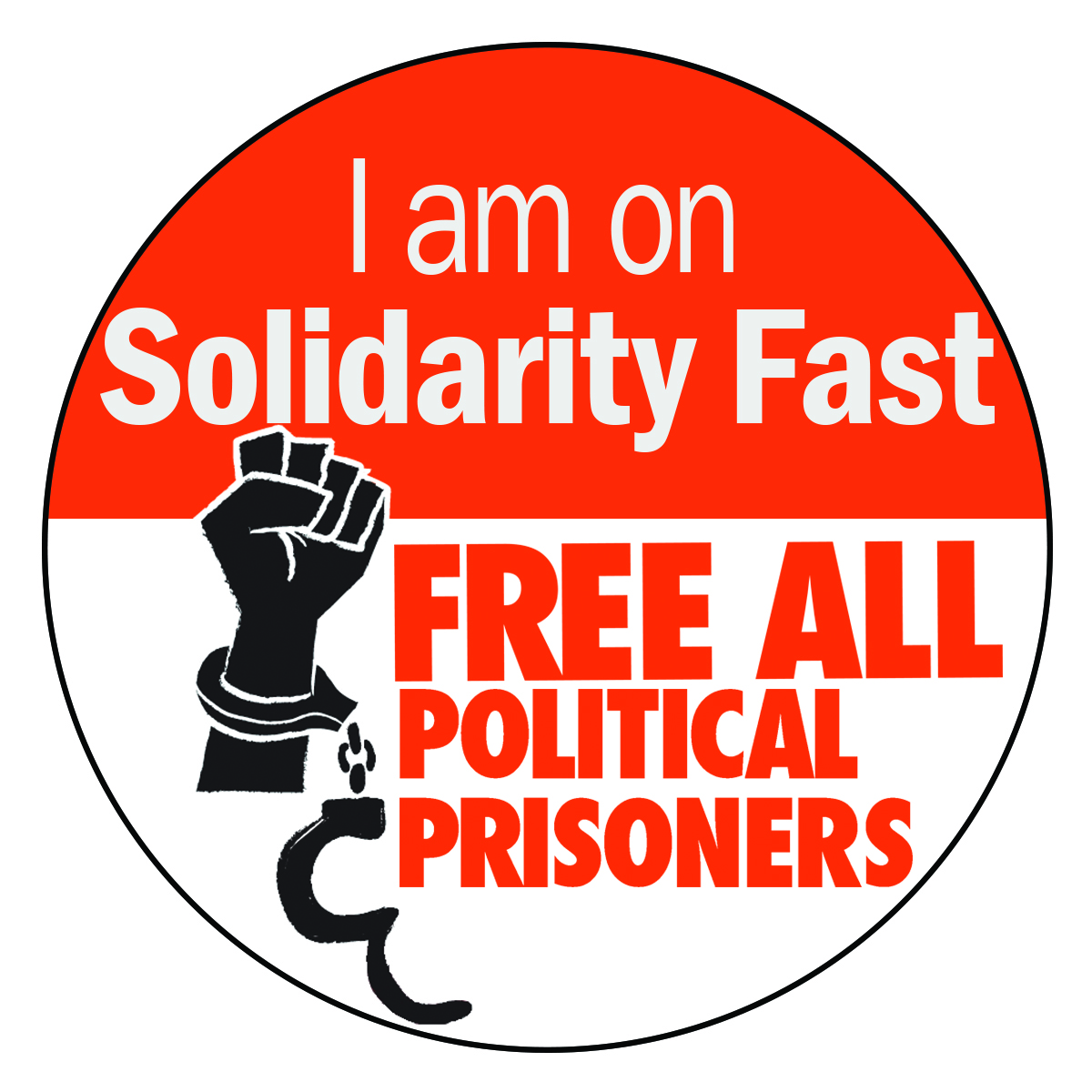 Hunger Fast in Solidarity with Political Prisoners in the Philippines

No meals for 28 hours in support of political prisoners

Calling all BAYAN-USA Members and Friends:

From the 15th-19th of January this year, all 491 political prisoners in the Philippines will conduct a hunger strike to call attention to their unjust imprisonment and the unabated state-sponsored repression of activists under the watch of President B.S. Aquino, who denies the existence of political prisoners.

Demanding fair wages for workers…food and shelter for victims of typhoons…land for farmers and indigenous people…and peace and sovereignty instead of militarization is NOT a crime—yet Aquino’s government regularly imprisons women, workers, youth, faith leaders, journalists, and doctors for standing up for their rights.

The hunger strike coincides with the visit of “the Pope of the Poor”–Pope Francis–to “the country of the poor”–the Philippines.  While the B.S. Aquino government will try to keep the political prisoners locked in their cells hidden from the Pope’s view, the political prisoners have called for international support of their strike to make sure that a spotlight shines brightly on their plight and the plight of the poor for whom they fight.

BAYAN-USA calls on all its members and allies to support the 491 political prisoners by conducting Solidarity Hunger Fasts from Jan. 15-19, 2015.   Tweet and post photos of yourself with a sign bearing this logo or the words “ #DearPopeFrancis I am on#SolidarityFast with #PoliticalPrisoners #HungerStrike in PH #FreePoliticalPrisonersPH”

To also show solidarity with the mobilizations for Black Self-Determination and BlackLivesMatter during Martin Luther King Jr. weekend which will also be happening on those dates, BAYAN-USA asks that members and friends participating in the fast aim to fast for either 4 hours (in recognition of the 4 hours Mike Brown’s body lay in the street after he was murdered) or 28 hours (in recognition of one black person being killed every 28 hours by police, security personnel or vigilante).  A solidarity fast means skipping meals and/or snacks for the period that you’re fasting.

Five days before the arrival of Pope Francis, political prisoners at Camp Bagong Diwa started their hunger strike yesterday January 10, which will last up to January 19, the Pope’s departure from the Philippines.

“Aside from these letters and other efforts, we are also putting the whole of ourselves in our plea for return of our freedom, application of justice and respect for human rights that have been and continue to be deprived from us,” thus said the political prisoners in a statement, explaining the reason for their hunger strike. The 32 political prisoners at Camp Bagong Diwa’s male and female dorm signed the declaration of hunger strike. Among them are Andrea Rosal, and consultants to the peace talks of the Philippine government and the National Democratic Front of the Philippines (NDFP) such as Alan Jazmines, Tirso Alcantara, Loida Magpatoc, Emeterio Antalan, and Leopoldo Caloza.

They expressed hope that, “Your Holiness may be able to help in pressing for the return of the lost freedom and other rights of political prisoners, and thus fully correcting such grave social and political ills that have

long been pestering in our country…” They added, “We, political prisoners, are among those being made to suffer terribly in this country, in the same way that you actually also saw and have also been deeply concerned about in your own country, Argentina.”

Aside from their plight, the political prisoners expect that Pope Francis would see the “widespread sufferings of the greater mass of the oppressed, violated, deprived and impoverished people in our country,” which, they said has also been the Pope’s concern in his own country, Argentina.

The political prisoners at CBD asked the jail authorities to donate in their behalf the at least P10,000 savings from their food rations to the victims of disasters brought about by Supertyphoon Yolanda in 2013 and Typhoon Senyang in 2014. “We ask that the donation of such savings be coursed through the International Committee of the Red Cross,” they said.

Alliance for the Advancement of People’s Rights

May the New Year bring you the warmth of renewed hope and fervor for justice and peace!

I am Nicolette Gamara, twenty five years old from the Philippines, working as a volunteer at Defend Job Philippines, an organization advocating for the rights and welfare of workers and the poor—an advocacy that I learned from my parents.

My father, Renante Gamara, is a political prisoner, who was also an organizer and leader working among urban poor and workers for more than three (3) decades.  In 2012, he was abducted by secret government operatives, was eventually slapped with criminal charges and is currently detained at Camp Crame Custodial Center. His abduction and imprisonment is part of and not an exceptional case of political persecution of activists, organizers and leaders of workers and urban poor critical of anti-worker and anti-poor policies of the government and social inequities in our society. The same year, my mother, Amelita Bravante and her fellow trade union and urban poor activists, were also charged with criminal offenses. My parents are not criminals. In fact, they are two of the most kindhearted persons I know, which is not a rarity in the social movement of which they and I are part of. We strongly believe that they are being persecuted because of the work they and all political activists do for the poor and oppressed, of the hope that they inspire so that meaningful change will come through people’s collective action.

It is especially because hope comes to us, in big and small ways. From our loved ones’ inspiring strength and unwavering conviction to work for the poor and oppressed in society, to the unceasing solidarity of individuals and organizations that work for their release and their just causes, to each and every message of support that comes, hope becomes a collective and powerful message that inspires meaningful change.

With the upcoming visit of Pope Francis in the Philippines, we ask you to join us in spreading the message of hope for the release of our fathers, mothers, sisters, brothers and all political prisoners.

From January 15 to 19, all 491 political prisoners in the Philippines will be holding hunger strikes and fasts, and will light candles inside prisons, to express their collective call for the release of all political prisoners. We enjoin you to be in solidarity with them through solidarity fasts (skipping 1 or 2 meals or snacks), and by posting the attached picture in your social media accounts (Facebook, Twitter, Instagram, etc) with the following texts:

We are also inviting you to join the following activities of the People’s Committee to Welcome Pope Francis (People’s Welcome) here in Manila:

January 14, 10am: On the eve of the arrival of Pope Francis in the Philippines, relatives of political prisoners, desaparecidos, and victims of extrajudicial killings will welcome the Pope at the Papal Nuncio’s residence

January 15, 10am: Misang Bayan at the Liwasang Bonifacio

January 16, 7am: Mothers, daughters and sisters of the disappeared, victims of political killings and political prisoners will wear black veils symbolizing our call for justice at Liwasang Bonifacio and Plaza Roma, in time for the mass by Pope Francis at the Manila Cathedral

January 18, 10am: People’s Welcome will attend the Mass at Luneta

On behalf of the families of political prisoners, I thank you for your support.