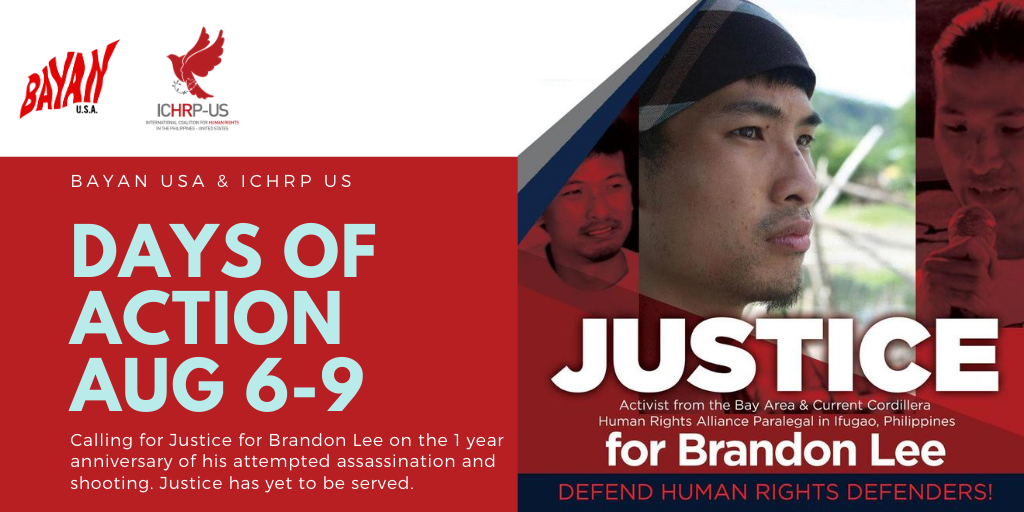 BAYAN USA & International Coalition for Human Rights in the Philippines- US  (ICHRP US) are calling for Days of Action starting on the 1 year anniversary of the attempted assassination of U.S. citizen Brandon Lee on August 6th, 2020.

JOIN THESE DAYS OF ACTION:

On August 6th, 2019, Brandon Lee, a San Francisco native who moved to the Philippines to work full-time as an environmental defender with the Cordillera Human Rights Alliance, was shot outside of his home, sustained life-threatening injuries and survived with permanent damage to his spine. This attack against Brandon came after years of harassment, surveillance, intimidation, and death threats by the Philippine military and police in an attempt to squash the movement of peasant farmers and indigenous peoples resisting environmental plunder and fighting for their rights to land and self-determination. Brandon’s story is not an anomaly, but rather the calculated result of Duterte’s counterinsurgency program Oplan Kapanatagan and the Executive Order 70 “whole of nation approach” that militarizes the civilian bureaucracy, targets unarmed activists as terrorists, and silences legitimate dissent.

As the Philippines was just named the most dangerous country for environmental defenders for the second year in a row and Duterte’s Anti-Terror Law has effectively legalized state terrorism, now more than ever we must honor Brandon’s work by seeking justice for all victims of Duterte’s fascist attacks against human rights and environmental defenders, condemning the Anti-Terror Law as Duterte’s continued push to enact nationwide de facto marital law, and demanding the US government pass the Philippine Human Rights Act and end to US support of the Duterte regime!