One month after Mary Jane Veloso was spared from Firing Squad: 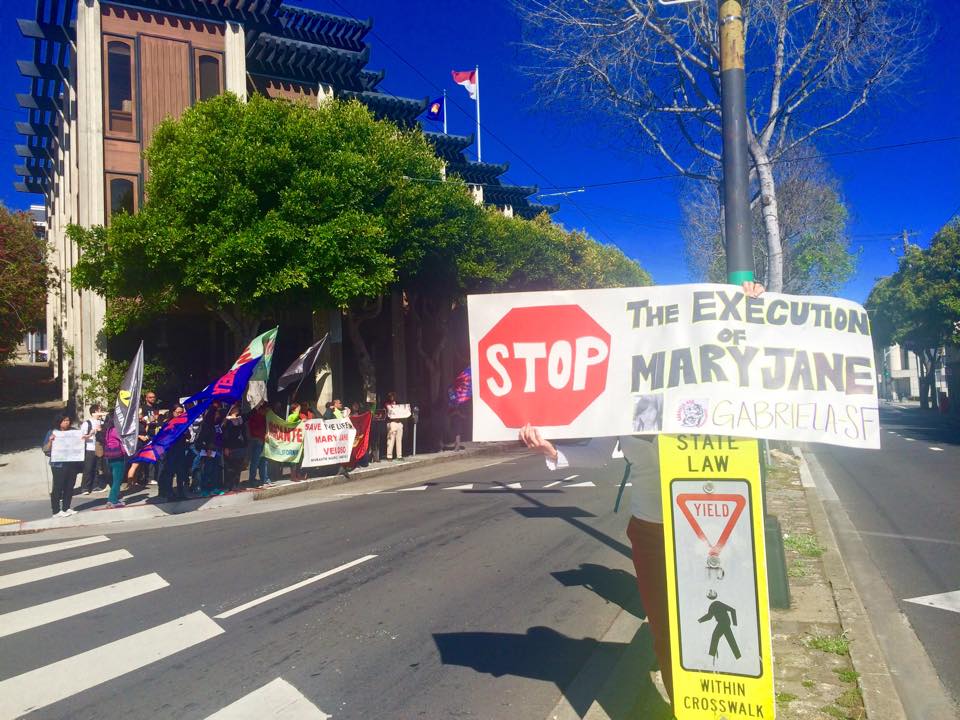 BAYAN USA joins Migrante International’s call to action for justice and freedom for Mary Jane Veloso! The last minute stay in execution for Mary Jane Veloso on April 29, 2015 was a great victory for the Filipino people who rallied to save the life of Mary Jane all over the world. It was through the efforts of Mary Jane, her family, the National Union of People’s Lawyers, and Migrante International among other migrant workers and organizations in Indonesia and internationally that this people’s victory was realized, despite what mass media claims as a victory of President Aquino. What Aquino and the Department of Foreign Affairs (DFA) should claim instead is their criminal negligence of Mary Jane’s case and creating the conditions which drive Filipinos to migrate in the first place.

Mary Jane’s tragic situation is not uncommon. Currently, there are more than 92 Filipino migrants sentenced to death row in other countries and 3,800 others incarcerated. Veloso now stands to testify against her trafficker Cristina Sergio who surrendered to the custody of the Philippine government.  The Veloso family has stood side by side with people’s organizations in demanding justice for all migrant workers and declared that it was the people who saved Mary Jane not Aquino.

“Aquino is the number 1 trafficker of the Filipino people!” declared Bernadette Ellorin, chairperson of BAYAN USA.

“More than 6,000 Filipinos are forced to leave the Philippines everyday because there is no livelihood for them there. Because of unfavorable economic conditions, Filipino people are forced to leave their families and children behind, many being illegally trafficked risking their lives and happiness in order to send money through remittances. This was the case of Mary Jane Veloso. Human trafficking of Filipino workers is also an epidemic here in the US. There are countless Filipinos  trafficked here as health workers, teachers, hotel service workers, domestic workers , office workers, etc.  who are also seeking justice for what happened to them.”

The fight for Mary Jane’s freedom continues. The movement relies on the same international pressure that led to the stay on her execution to ensure that her case comes full circle with her freedom and justice against her perpetrators including the BS Aquino regime.  The Veloso family plans on taking Mary Jane’s trafficking case to the International People’s Tribunal on crimes against the Filipino people by President BS Aquino and the US government as represented by Barack Obama this July 16-18 in Washington D.C. They will be among other witnesses and victims of human rights violations who will testify cases of human trafficking, harassment, abduction and torture by the government, militarization of communities including by US personnel, among many other issues.

This year alone the Aquino regime has failed at every juncture to truly defend the Filipino people. The Mamasapano bloodbath started the year in January, followed by the case of Mary Jane Veloso on death row, and the worst factory fire in Philippine history that killed more than 72 workers at Kentex Manufacturing Inc. on top of the growing list of Filipino people’s grievances against the Aquino regime.  BAYAN USA joins the popular call in the Philippines demanding Aquino resign or be forced out of office before 2016.

“The people have truly had enough of BS Aquino’s lies, corruption, and blatant disregard for the Filipino people! There are better solutions than to keep him in office, nor to continue to the election of yet another corrupt politician. We are calling for the people’s transitional council to lay the basis for transforming a broken system.” Ellorin continued.

BAYAN-USA calls on all of our members, allies and people who believe in justice and human rights to respond to Migrante International’s call to action for Mary Jane by participating in one or more of the following: