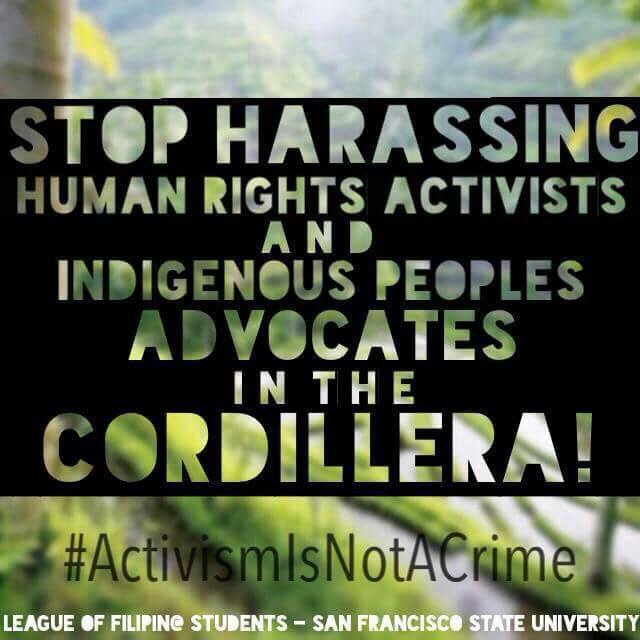 A year has passed since the state-sponsored extra-judicial killing of William Bugatti, a human rights worker in the Cordillera Human Rights Alliance (CHRA) Philippines. The Cordillera People’s Alliance recently released a statement of urgency due to the continued harassment and threats to life of many activists, including human rights workers in Ifugao, Cordilleras. This state repression continues under B.S. Aquino’s Oplan Bayanihan counter-insurgency program, which eliminates the line between legal unarmed organizations and the underground armed revolution, targeting innocent civilians with more than 200 extra-judicial killings. We hold the Aquino government accountable for his murder and demand justice for William and all victims of human rights abuses in the Philippines.

In 2012, William was harassed and vilified by the Armed Forces of the Philippines(AFP) that placed him on their target list as the “brains of the New People’s Army” along with 27 other people in the community. Despite the threats to his life, William continued to engage in human rights work for militarized communities, disaster relief and rehabilitation programs, and working for indigenous peoples rights. He was targeted because of his organizing work with communities to stand up for their rights against militarization, against mining corporations, and for the development of socio-economic programs that the government has never provided for the people.

“One of the targets on the recent vilification and harassment campaign put forth by the Aquino regime is Brandon Lee, one of our community organizers in BAYAN USA originally from the Northern California region. We cannot be silent, and we demand an end to the harassment and threats to life and for the Aquino regime to stop targeting innocent civilians and unarmed organizations!”

Lee, a US citizen of Chinese descent, must be afforded full protection by the US embassy while living in the Philippines. We demand an independent investigation on the surveillance, threats, and harassment on the human rights workers in the Cordillera, especially in Ifugao province.

Among the Ifugao Peasant Movement (IPM) members and staff tagged as members of NPA are: Nestor Peralta, Claudine Panayo, Billy Karty, Ben Calingayan, and Brandon Lee. Active barangay officials and local members of people’s organizations are also vilified, including Edwin Bumolyad, barangay captain of Montabiong, Lagawe, Ifugao; Nonoy Bangtiwen, a member of the barangay council of Tulludan, Tinoc; and Dick Tangid, a member of the barangay council of Tupaya, Lagawe and the current vice chair of IPM; Ricardo Mayumi and several others. Engr. James Tayaban, a human rights defender, is also included in the vilification materials.

“Cases like these and that of Melissa Roxas, another US citizen and member of BAYAN USA who was abducted and tortured by the AFP and eventually released in 2009, remind us that the Philippine government is still corrupt, repressive, malicious, and operates with a level of impunity acknowledged by the UN Human Rights Council. It will take a strong mass movement in the Philippines with international support to demand and enact change upon this corrupt and unjust system,” Ellorin continues. “Right now, we must make these threats known publicly, speak out to the Philippine consulates across the nation with our demands, and join the movement in the Philippines calling for B.S. Aquino to resign!”

BAYAN USA is endorsing the International Peoples Tribunal looking into the crimes of B.S. Aquino, set for July 16-18 in Washington DC.

JUSTICE FOR WILLIAM BUGATTI & ALL VICTIMS OF HUMAN RIGHTS ABUSES!

STOP THE VILIFICATION AND HARASSMENT OF HUMAN RIGHTS AND INDIGENOUS RIGHTS WORKERS IN IFUGAO!