On the 1-year anniversary of Jerome Aba’s detainment and torture on U.S. soil, BAYAN-USA continues to call for his justice and for the ouster of President Rodrigo Duterte for his worsening fascism and terror upon the Filipino people.

On April 18 2018, peace advocate Jerome Aba was traveling from the Philippines to the U.S. to participate in a speaking tour about the human rights situation in the Philippines. While on a stopover at San Francisco International Airport (SFO), he was held incommunicado by the Customs and Border Protection (CBP) Agency at SFO for 28 hours, where he endured various forms of psychological and physical torture. This all occurred despite Aba having been granted a 10-year multiple entry visa to the United States.

During Jerome’s detainment, BAYAN-USA members and allies staged an action at SFO while others around the country called the CBP to demand Aba’s release. Despite hours of community pressure, Aba was denied entry and sent back to the Philippines. He spoke publicly at a press conference just hours after landing in Manila, Philippines. Aba revealed that the CBP called him a terrorist, forced him to undress while interrogating him, and put him in front of an industrial-electric fan. After he shared that he was cold, they threatened to shoot him and left him in a room with a gun and grenade on a table. It was no surprise that Aba was targeted by U.S. Customs and Border Protection due to his outspokenness towards ending martial law in Mindanao, criticism of Duterte’s fascist repression backed by U.S. militarization in the Philippines, and his Moro (Muslim) background.

“Psychological and physical torture is a despicable tactic being used to terrorize activists and migrants. However, we have come to expect nothing less from U.S. Customs and Border Protection, whose track record shows that they have ripped apart families, detained and abused children and elders, with innocent people dying in their custody. U.S. imperialism and all of its agencies are the real terrorists, not innocent people speaking up for human rights or migrating as a means of survival,” said Rhonda Ramiro, BAYAN-USA Chair.

Equally appalling is the handling of the Philippine government in regards to Aba’s experience. When the Consulate in San Francisco was alerted to Jerome being in custody of Customs and Border Protection, their initial response was that CBP holding and deporting Filipino travelers was a routine occurrence that they could do nothing about. Upon returning to the Philippines, Jerome subsequently submitted a letter to the Philippine government asking for an investigation into his treatment to be undertaken, but that request was met with silence.

With U.S. funding and support, Duterte continues to vilify and launch smear campaigns through red-tagging and terrorist-labelling against human rights defenders and organizations, such as Karapatan, Rural Missionaries of the Philippines, Ibon Foundation, under his dubiously named counterinsurgency program Oplan Kapayapaan (Operational Plan Peace). Like Aba, no one is safe from being targeted for speaking out against the egregious human rights violations, forced evacuations, and state-sponsored killings of everyday Filipinos and indigenous peoples.

BAYAN-USA highlights the collusion between the U.S. and Philippine governments in the detainment and deportation of Jerome Aba and continues the call for accountability and justice for Aba. It is a fact that millions of our U.S. tax dollars are funding torture and human rights violations in Duterte’s drug war and U.S.-designed counterinsurgency programs. We call on our members and allies to take part in escalating actions to further expose the corrupt, violent fascist U.S.-Duterte regime and to join the call to oust him from presidency.  Join the action at San Francisco International Airport April 19th 6pm.

ICHRP US video about Jerome 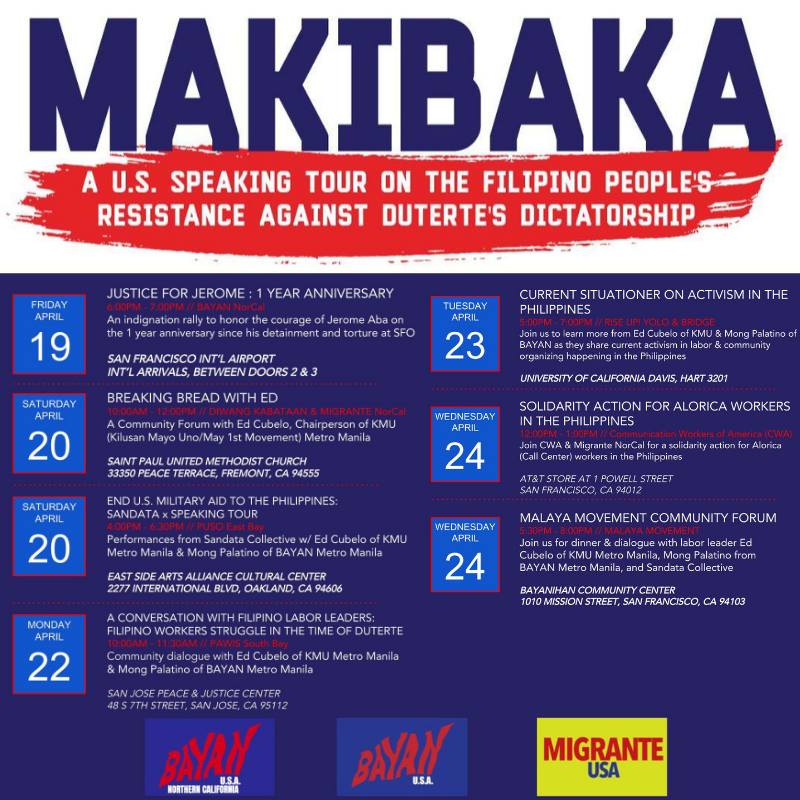