On International Day of Solidarity and Action for the Victims of Haiyan in the Philippines, BAYAN-USA Conducts Nationwide Solidarity Hunger Strike Calling for Prioritization of Relief Efforts and to Condemn US and Aquino Governments’ Militarized Approach to Aid

A long week has passed since Typhoon Haiyan ravaged the Philippine islands. The Aquino administration has yet to properly distribute relief aid. Instead, PNoy has responded to the crisis with increased militarization both by the Armed Forces of the Philippines and the United States. Communities already in a heightened state of devastation and desperation do not need to be met with guns or arrested for “looting.” This ludicrous response by Aquino fails to provide the survivors with the water, food, medical attention and shelter that they need, and will only add to the millions of people who have been displaced, injured or killed in the wake of Typhoon Haiyan.

BAYAN USA calls on President Aquino to stop pointing his fingers at local governments and attempting to downplay the effects of the Typhoon, and to act how a President is expected to act during an extreme crisis. He needs to respond, not with increased militarization, but by providing the necessary funds to provide relief and rehabilitation; to allow relief aid to come into the country without being taxed; to gather response teams such as healthcare workers and many others to support the immediate needs of the people. On November 13th, as part of the International Day of Action for Typhoon Haiyan Relief, BAYAN USA conducted a nationwide hunger strike, #HungerStrike4Haiyan, to further expose the lack of response by the Philippine government to supply its people in desperate need of food, water and support. 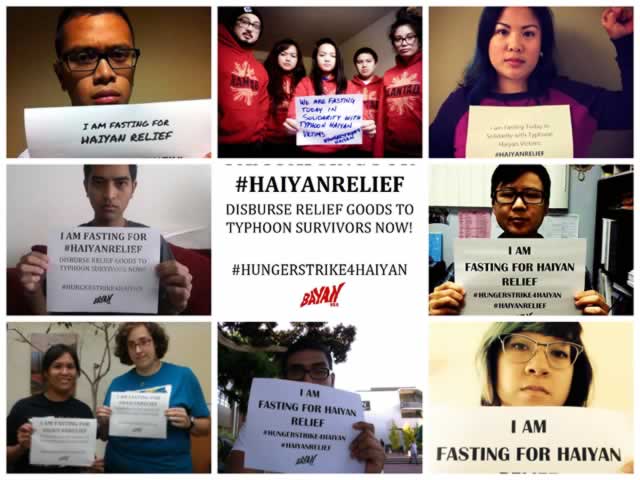 BAYAN USA calls upon all peoples of the world to stand in solidarity with the victims of Typhoon Haiyan by supporting NAFCON’s 100% grassroots campaign to bring relief aid directly to the grassroots communities that have been devastated by Typhoon Haiyan/Yolanda and have been virtually abandoned by Aquino and his inept response to the disaster. Please visit their site to donate and join actions or events fundraising for genuine relief at nafconusa.org

While BAYAN-USA also pushes for the end of the militarized response of the Aquino and US governments to this tragedy, and for Aquino to finally do the right thing by releasing all of the money tied up in his pork barrel funds and using it for relief, we hope you will join us in this act of genuine solidarity with the people of the Philippines by making a donation today.