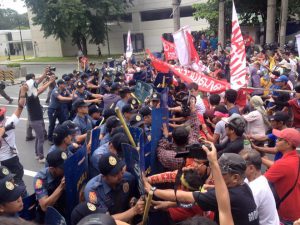 BAYAN-USA condemns the violent dispersal of Moro and indigenous protestors of Kilusan ng Moro at Mamamayang Katutubo para sa Sariling Pagpapasya (Sandugo) in front of the US Embassy in Manila on October 19. This vicious attack exposes the incessant power of the US in controlling the internal affairs of the Philippines to defend US imperialism’s interests, even to the point of ordering the Manila Police District (MPD) to defend the US embassy by attacking its own people, who were exercising their right to protest.

We stand in solidarity with Sandugo in calling for an end to militarization, state repression, and the plunder of ancestral land for profit and power of foreign interests. We call on Philippine state forces to stop defending US imperialist interests and instead stand on the side of the Filipino people.

We demand accountability from the MPD Police Senior Supt. Marcelino Pedrozo Jr., who ordered the violent dispersal of protesters. We call on President Duterte to end the continuing repression being waged by Philippine military and police forces. This includes an end to the counterinsurgency program Oplan Bayanihan, which is one of the driving factors behind the violent harassment, displacement, and murders of Moro and indigenous people in their ancestral communities that Sandugo was protesting in the first place.

We also demand an end to US intervention in the Philippines, which incites these acts of repression. This includes the withdrawal of all US intelligence and military facilities, bases, troops and advisors. This includes the Big mining, oil and energy, and agribusiness corporations which run private armies and dictate local Philippine military and paramilitary forces to attack the indigenous communities whose land they are stealing and destroying for profit. This includes the termination of the Visiting Forces Agreement (VFA) and Enhanced Defense Cooperation Agreement (EDCA) which flagrantly violate Philippine sovereignty. The movement for land, food, justice, sovereignty and democracy will not rest until all traces of US imperialism are banished from the Philippines.