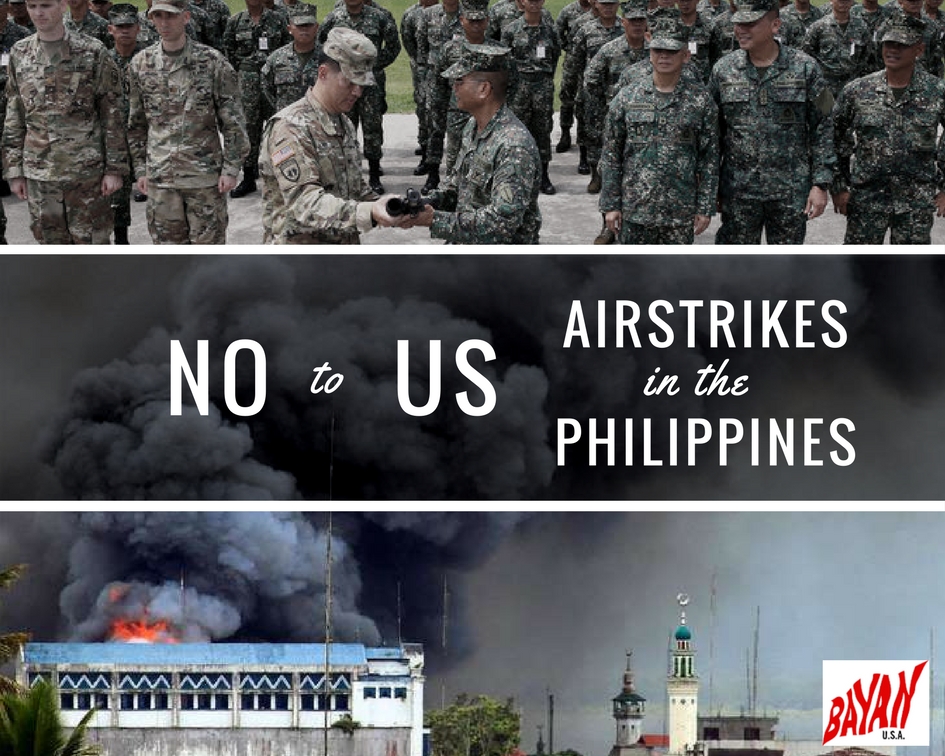 BAYAN-USA Condemns US Threat of Airstrikes in the Philippines

Yesterday, Secretary of State Rex Tillerson met with President Duterte announcing continued U.S. military and intelligence support to the Philippines. The Pentagon is considering airstrikes on the people of Marawi, Philippines under the guise of waging the “war on terror” and preventing ISIS militants from establishing the Philippines as a launchpad for the spread of terrorism in Southeast Asia.

In reality, the U.S. is faking the threat of ISIS as a pretext for continued intervention and dominance over the Philippines. The intention is to protect U.S. imperialism’s trusty foothold in the Asia Pacific region, in order to maintain and expand its economic, political and military hegemony.

Like Trump’s plummeting approval ratings, U.S. imperialism’s deception of the people is nosediving.  The people are sick of being told to eat the government’s austerity measures in order to feed the the bottomless budget of the war machine. The Trump regime wants a “successful” anti-terrorism mission to save its dying popularity and temporarily stoke narrow-minded patriotism.

Since May 23, aerial bombings by the Philippine military under the guise of fighting ISIS have already reduced Marawi to rubble, killed innocent civilians, driven over 400,000 to flee, and transformed the surrounding areas into refugee camps.  President Duterte’s declaration of martial law over the more than 20 million people in the entire island of Mindanao has already increased the human rights violations committed with impunity by state forces.  President Duterte’s martial law is coupled with his expanded counter-insurgency program patterned after the U.S. Counterinsurgency Guide of 2009, casting a net on “threats to national security” to include grassroots activists fighting for justice and the New People’s Army waging a legitimate and internationally-recognized national liberation struggle. President Duterte’s acquiescence to U.S. intervention in Marawi has furthered the violation of Philippine sovereignty by U.S. forces and their drones and special operations.  A new aerial bombing mission by the U.S. will have disastrous consequences for the Philippines.

President Duterte must listen to the demands of the masses and block the U.S. from bombing our people. He must stand up to Trump’s vile warmongering and oppose the illegal conduct of military operations on Philippine territory.  President Duterte has the opportunity to live up to his early statements about breaking U.S. dominance of the Philippines. President Trump will make his first visit to the Philippines this November 10-14 as the 31st ASEAN summit will take place at Clark Field, Pampanga.  The Filipino people will never cease our fight to uphold Philippine sovereignty and end U.S. imperialist subjugation of our country and will show up in full force in opposition to the ASEAN summit and U.S. President Trump. Increased U.S. intervention will only stoke the Filipino people’s fire to end 119 years of American domination of our country.

On the heels of the “Solidarity & Fightback: Resisting US-Led War, Militarism and Neofascism Conference” in which over 250 people from 21 countries participated, BAYAN-USA calls on our friends in the growing movement for a just peace to join us in opposing U.S. threats of preemptive strikes on the people of Marawi.  We must fight side by side to rise up and resist against our common enemy, U.S. imperialism and its military aggression in all forms, in all places.

NO US AIRSTRIKES ON THE PHILIPPINES!