No to US War in Syria 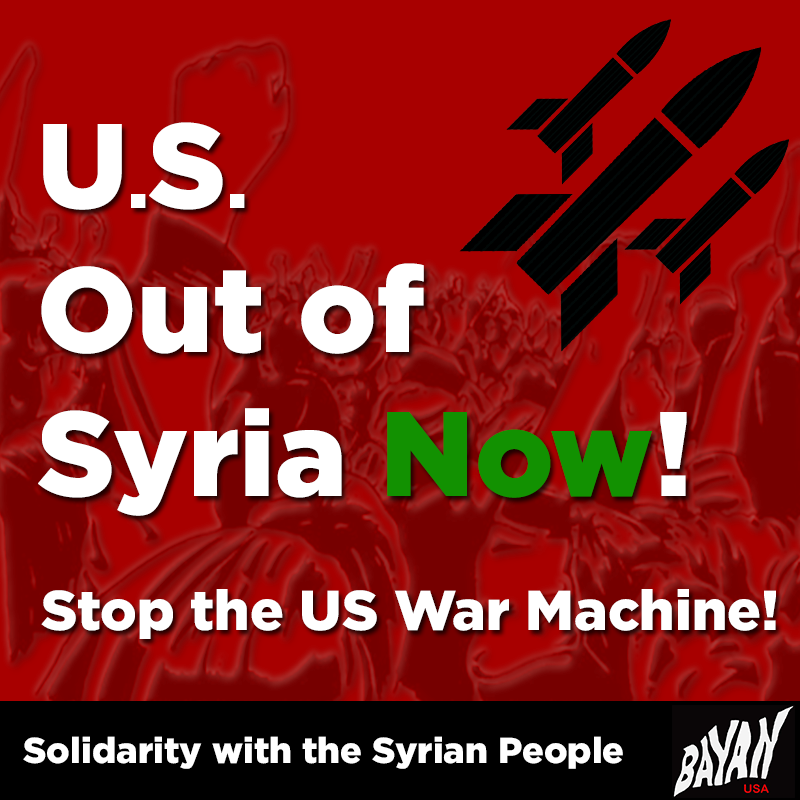 President Trump’s decision to launch 59 US Tomahawk cruise missiles at Syrian Air force base in Homs province was not driven by his humanitarian desires to help the Syrian people against the Assad regime. The Trump administration has proven to be the opposite and has instead closed its doors to refugees and has enacted Executive Orders banning Muslims from entering the United States twice. We also know when those bombs killed more innocent civilians and ultimately the US war in Syria will never resolve the problems in the country and will only create more chaos, destruction, and death.

The proxy war in Syria can seem very complicated, but underneath all the political rhetoric is the true reason that thousands of innocent Syrians have been killed and forced to become refugees due to US monopoly capitalist interest. The mainstream media propaganda machine diverts public attention to focus on good versus evil and religious warfare as the reasoning behind the war in Syria. Trump is merely continuing the trend of his predecessors, whether it be in the guise of humanitarian aid, fighting terrorists, or manifest destiny. The root of all US wars of aggression lies in imperialist geopolitical interests to expand its hegemony over land, natural resources, trade routes, consumer markets for US surplus products and cheap labor markets. 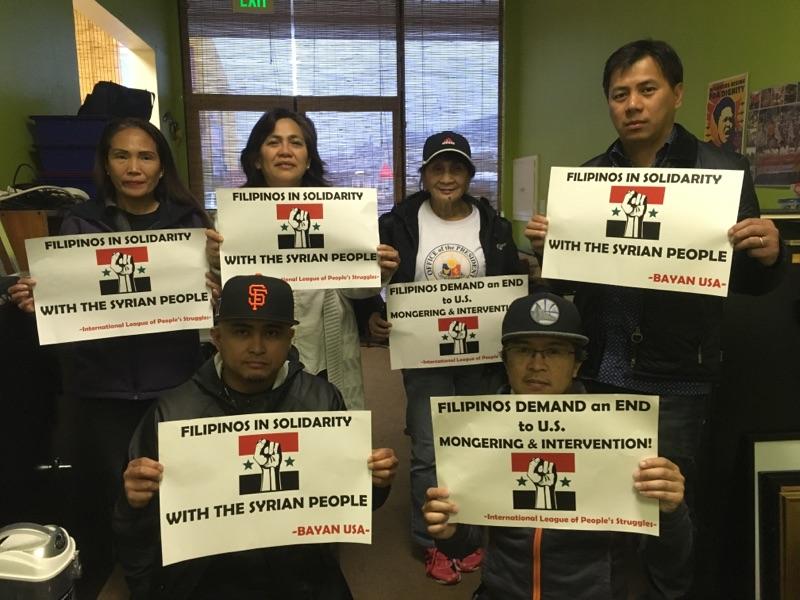 BAYAN USA condemns the US led proxy war in Syria and the launching of the 59 missiles. Both the Trump and Assad regimes are using the same exact rhetoric of “Fighting the War on Terror” as their reasoning behind their attacks on the Syrian people, but we must uncover the truth behind their interest in this war which is economic power in a centrally located oil rich region of the world. We must connect the launching of the never ending US “War on Terror” with Iraq, Iran, Afghanistan, Turkey, Saudi Arabia, Israel, Palestine and Syria to the economic capitalist interest in the middle east and global economic domination. We demand an end to US warmongering and intervention for the sake of humanity. We call on all peoples of the world to stand in solidarity with the Syrian people and their rights to self-determination for their own country. We invite all freedom-loving peoples to gather to build solidarity and fighting capacity against US-led war, militarism and neo-fascism this August 5-7 in Toronto, Canada held by the International League of Peoples’ Struggle and the International Women’s Alliance.

US Out of Syria and the Middle East/West Asia!

Self-Determination for the Syrian People!