BAYAN USA CONDEMNS the State Harassment
of Progressive People’s Organizations in the Philippines! 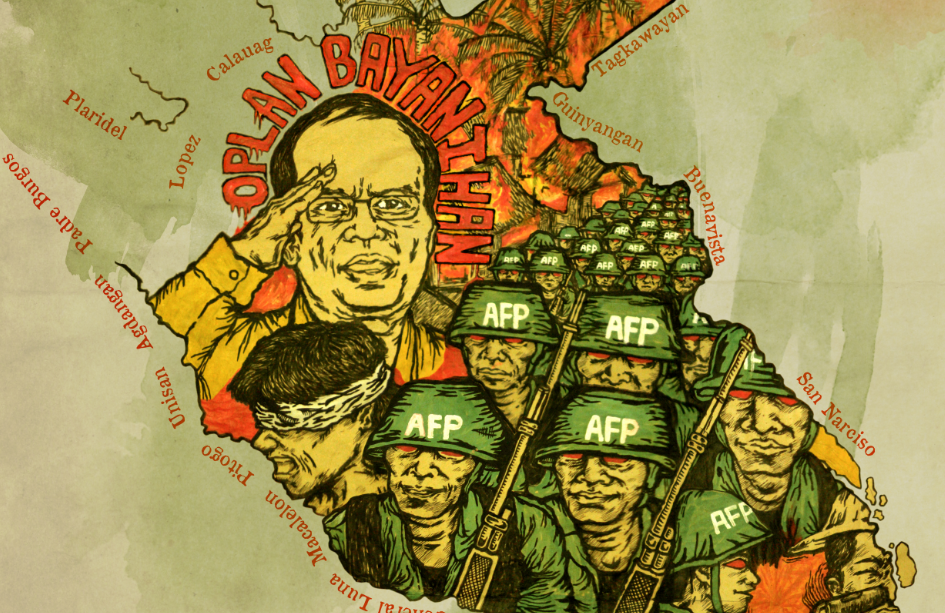 “There is no excuse for state agents of the Philippine government to harass, intimidate, and threaten progressive people’s organizations in the Philippines! We want them to know that we are watching them with scrutiny,” stated Bernadette Ellorin, chairperson of BAYAN USA.

BAYAN USA as an international chapter of BAYAN Philippines has been receiving a more and more emails detailing the harassment of members in organizations part of the progressive alliance as well as people’s organizations in the Cordillera region. Earlier this year Brandon Lee, a former member of League of Filipino Students San Francisco State University chapter in California, received death threats and harassment letters because of his human rights work in the Ifugao, Cordillera region. Now, there have been reports of threats and harassment of members of BAYAN, Anakbayan, officers of the Confederation of Unity of Recognition and Advancement for Government Employees(COURAGE), members of Salinlahi Alliance for Children’s Concerns and Children’s Rehabilitation Center among many others.

“There have been too many instances when this type of harassment would soon be followed by extra-judicial killings by the perpetrators of the State. We are concerned for the safety and well being of our fellow organizers in the Philippines and must do everything in our power to prevent any further harm to them and their families,” Ellorin continued.

BAYAN USA calls upon its members and friends to show the Philippine government that we are watching them. Together we will stand up for human rights and to protect our sisters and brothers against state repression!

1. The immediate formation of an independent fact-finding and investigation team composed of representatives from human rights groups, the Church, local government, and the Commission on Human Rights that will look into the threats, harassment, intimidation and surveillance against these progressive organizations.
2. The military to stop the labelling and targeting of people’s organizations as “front organizations of the communists” and “enemies of the state.”
3. The Philippine Government to terminate its counterinsurgency program Oplan Bayanihan, which victimizes innocent and unarmed civilians.
4. The Philippine Government to be reminded that it is a signatory to the Universal Declaration of Human Rights and that it is also a party to all the major Human Rights instruments, thus it is bound to observe all of these instruments’ provisions.

You may send your communications to:

I, (INSERT YOUR NAME), have been paying close attention to the Aquino administration throughout the years only to be overwhelmed by disappointment. I am appealing to you as people in very important political positions that can make a bigger impact than myself as an individual.

I have many friends in the Philippines and I am concerned for their safety and their lives due to the continuation of Operation Oplan Bayanihan, the counter insurgency program enacted by the Philippine government. I have received accounts from members of BAYAN, officers of the Confederation of Unity of Recognition and Advancement for Government Employees(COURAGE), members of Salinlahi Alliance for Children’s Concerns and Children’s Rehabilitation Center among many others as well as community organizations in the Ifugao, Cordillera detailing political vilification, surveillance and harassment of the organizers. There have been letters and notes sent to the leaders in many of these organizations claiming their organizations are linked to the Communist party of the Philippines-New People’s Army. By wrongfully doing so, the perpetrators are attempting to justify the targeting and killing of these citizens who are waging a legal battle for indigenous rights.

The killing of community members that are participating in legal above ground organizations is nothing new. The Arroyo government has a depressing track record of more than 2,200+ extra-judicial killings and the Aquino administration is following in the same direction with more than 200+ political killings. These kinds of actions must stop. It is a violation of human rights, and by-passes the right of trial by court.

There are many people who truly stand on the side of justice, and I hope that in your hearts and minds you can see that these extra-judicial killings are wrong, unjust, and must be stopped. I am utmost concerned for my friends and fellow organizers who have been harassed, surveilled and threatened.

I am appealing to you to push forth an independent fact-finding investigation composed of representatives from human rights groups, the Church, local government, and the Commission of Human Rights that will look into the surveillance, harassment, intimidation and threats against these progressive organizations. For the Aquino administration to withdraw its counter insurgency program Oplan Bayanihan due to its insufficiency leading to the deaths of innocent unarmed civilians and activists. The military to stop the labelling and targeting of people’s organizations as “front organizations of the communists” and “enemies of the state.”

As a (Filipina American) who pays attention to the conditions of the Filipinos in the Philippines as well as the Filipinos that have migrated to the United States. I have hope that the Philippines becomes a country that genuinely is self-sustaining, nationally industrialized, and serves the interest of the majority of its country folk, and only then will I be proud to be (Filipina). As of now, I am ashamed at the conditions of Filipinos and at the government that perpetuates violence and oppression.