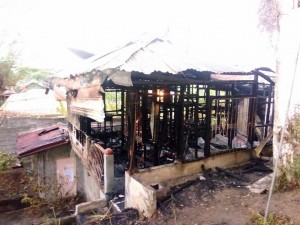 (Above:  UCC Haran Dormitory room after the fire. Photo by Kilab Media)

On February 24th, 2016 at approximately 2:00 a.m., unidentified men on motorcycles snuck into the United Church of Christ compound in Davao City, pouring gasoline and torching the evacuation camp and dormitories where Lumad have stayed since last year as a place of refuge and protest after the militarization of their indigenous schools and communities.  At least five Lumad suffered injuries, including two children who were hospitalized.  BAYAN USA strongly condemns the recent fire incident harming the lives of Lumad refugees at the United Church of Christ (UCC) Haran House in Davao City, Mindanao.

Many indigenous leaders and advocates believe the incident was a deliberate act of violence to further terrorize Lumad communities who have united to resist landgrabbing, large-scale mining, corporate plantations, and militarization of their ancestral lands.  We see this attack as part of the larger issue of state violence and repression carried out by the Aquino government and its paramilitary forces such as the Alamara who have launched a continuous series of attacks on the Lumad communities. 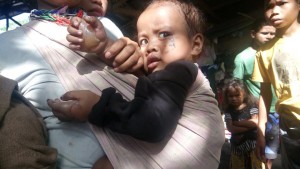 (Right: A 2 year old child, one of the Lumad victims in the Haran evacuation site arson, photo credit: Kilab Media)

“This fire only demonstrates the Aquino government’s desperate attempts to crush the Lumad communities who have organized themselves in defense of their ancestral land.  Aquino is hellbent on selling their land to foreign corporations and welcoming new mining contracts, even at the cost of Filipino children’s safety and lives,” explained Bernadette Ellorin, Chairperson of BAYAN USA.  “We must continue to expose Aquino for these heartless acts of terrorism carried out by the AFP and paramilitary groups like Alamara.”

We as Filipino Americans join the international community in calling for an investigation of the arson and to hold all perpetrators accountable.  We demand Aquino immediately withdraw troops of the Armed Forces of the Philippines and paramilitary forces from the ancestral land of the Lumad.  Ellorin continued, “We are inspired by the long legacy of resistance and perseverance of the Lumad communities.  Many of our members have visited their indigenous schools which have faced brutal attacks, including harassment, intimidation, and killings under the Aquino regime.  We are committed to standing with the Lumad and organizing support for their struggle to uphold their self-determination and their rights to their ancestral land.  We will continue to organize Filipinos and allies across the U.S. to expose Aquino’s crimes against the Filipino people and demand an end to U.S. military, financial and political support for such rampant impunity.”

Read “Is There No Safe Place for the Lumad?”  by Bulatlat