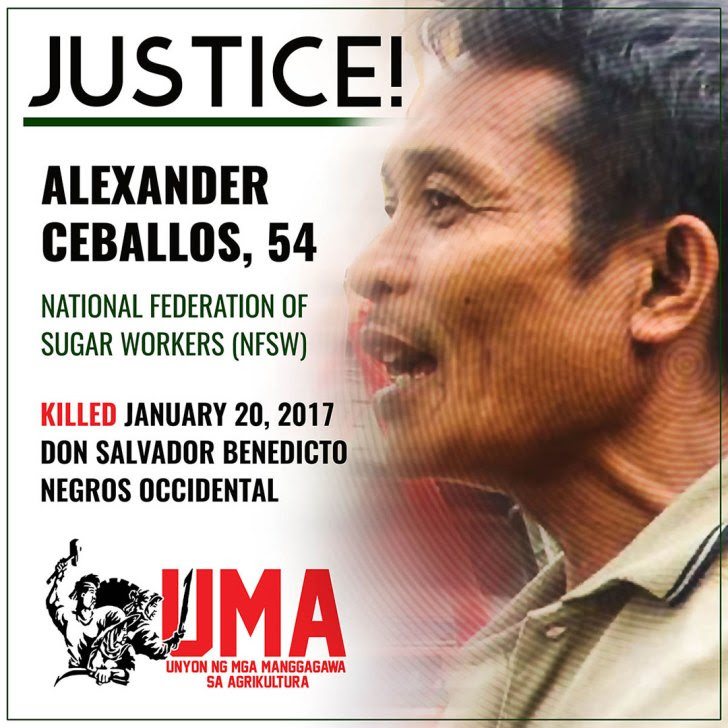 Amidst the politically-motivated killings of four peasant and indigenous leaders in less than one month, the Philippine government unveiled its new counter-insurgency plan Operation Plan Kapayapaan (Peace) at the end of January, giving a new name to an old campaign of attacks targeting activists defending their land, livelihood and fundamental human rights.  BAYAN-USA condemns the establishment of Oplan Kapayapaan and demands justice for the killings of Venie Diamante, Veronico Delamente, Alexander Ceballos, and Wencislao Pacquiao by suspected private henchmen of mining corporations and landlords backed by the state.

“The Armed Forces of the Philippines (AFP) can try to repackage its counterinsurgency programs with nice-sounding names like ‘Bayanihan’ and ‘Kapayapaan,’ but this is nothing but a marketing ploy. At their core, counterinsurgency programs employ violence, intimidation, and lies meant to smash dissent and uphold the status quo. The dubiously-named ‘Oplan Peace’ is the exact opposite of peace,” stated BAYAN-USA Chair Bernadette Ellorin.

“Diamante, Delamente, Ceballos and Pacquiao were protecting their people from the incursions of big palm oil plantations and mining corporations. They had every right to stand up for the people’s right to land, food, and work–the very things that build a foundation for genuine peace in the Philippines,” said Ellorin.

BAYAN-USA also sees the Philippine government’s counterinsurgency program as one reason the New People’s Army decided to terminate its unilateral interim ceasefire with the GRP, which went into effect last August when peace negotiations began between the National Democratic Front of the Philippines (NDFP) and the GRP. “The AFP’s continuing occupation of indigenous people’s communities, illegal arrest and detention of activists on trumped-up charges, and active military operations under Oplan Kapayapaan are sabotaging the efforts to achieve a just and lasting peace in the Philippines. If the Duterte administration is serious about peace, it should scrap all counterinsurgency programs including Oplan Kapayapaan, rein in its AFP, and pursue the fundamental socio-economic and political reforms that are needed to address the grave inequity that is at the root of the armed conflict in the country,” said Ellorin.

Four farmers – Venie Diamante, Veronico Delamente, Alexander Ceballos, and Wencislao Pacquiao –have been killed in a month, two of them indigenous leaders in Mindanao. Please join us in condemning the continuing attacks against farmers and leaders of indigenous communites who have dedicated their lives in defense of their land and rights. As the Duterte administration and its Armed Forces of the Philippines (AFP) announced their new counter-insurgency plan Oplan Kapayapaan, replacing Oplan Bayanihan, attacks targetting land and environmental activists, perpetrated by private armies of landed families and mining firms complicit or in connivance with State security forces, continue. While names of operational plans changed, the military’s objectives to quell dissent and defense of people’s rights remain. Such killings are also reflective of the prevalent dominance of big landlords and businesses in the Philippines and their use of violence against peasants struggling for genuine agrarian reform. The killings occurred before and during the third round of formal peacetalks between the Government of the Republic of the Philippines (GRP) and the National Democratic Front of the Philippines (NDFP), when both Parties started to tackle the crafting of an agreement on socio-economic reforms including genuine agrarian reform and rural development. Let us come together to demand for justice for the slain peasant activists and to call for an end to this climate of impunity. Let us demand and fight for comprehensive reforms and fundamental change to solve the root causes of injustice, landlessness and poverty in the country.

On January 5, 2017, around 4pm, Venie Diamante, 43, a T’boli and municipal tribal chieftain, was brutally killed by an unnamed assailant on board a motorcycle while on his way home from Koronadal City.  Diamante was already near his residence in Sitio Lambusong, Brgy. Puti, Norala, South Cotabato, when the gunman continuously fired at him; he sustained eight (8) gunshot wounds. He was left on the side of the road, when a couple found him while on their way to the market. Diamante’s remains were brought to funeral parlor in Sentro Nola.

On the morning of the next day, January 6, 2017, the regional police arrived to investigate the incident. Residents from the community attested that Diamante was a good person and a respected tribal leader. The police then showed a petition to survey the area which is part of the T’boli ancestral domain, a move that Diamante strongly advocated against. In 2010, a village resolution was passed to conduct the said land surveying, without the knowledge of Lumad residents in the community. On January 12, 2012, when the aforementioned resolution was made known, Diamante and four (4) other datu (tribal chief) filed a petition at the office of the tribal council against plans to conduct the said land surveying of the T’boli ancestral domain. The said barangay resolution, Resolution No. 3, series of 2010, would allow the setting up of a subdivision in the area shared by Lumad and Christian settlers. Captain Honorio Villa was suspected to have passed the resolution to cause divide between the Christian settlers and the Lumad to eventually pave the way for the entry of palm oil plantations in the area.

Weeks later, on January 20, 2017, two activists in Surigao del Norte and in Negros Occidental were killed. Katribu regional partylist coordinator Veronico Delamente, 27, a Lumad-Mamanwa and member of Kahugpungan sa Lumadnong Organisasyon (KASALO) in the CARAGA region, was shot by two unnamed assailants in Punta Naga, Brgy. Cagdianao, Claver, Surigao del Norte. Delamente, along with other council members of Asosasyon sa Madajaw na Panaghiusa sa Tribung Mamanwa sa Tag-anito ug Urbizondo (AMPANTRIMTU), an organization recognized by the National Commission on Indigenous Peoples (NCIP), were invited for an emergency meeting with the NCIP with regard to an indigenous people survey to approve the Free, Prior and Informed Consent (FPIC) proposal of the Platinum Group Metals Corp. (PGMC) to expand their mining operations in the area. Since December of last year, the FPIC proposal was already on the table for the approval of AMPANTRIMTU council members, which Delamente had earlier rejected.

On the noon of January 20, two men on board a motorcycle – the driver wearing a hoodie with his face partially covered by a handkerchief while the person on the passenger seat was wearing a bonnet and a black jacket with the words ‘CIDG’ printed in the back – were seen in the area. By 12:37pm, while Delamente and the others were waiting in the Punta Naga gym, the motorcycle returned to the gym whereby the man in the passenger seat got off and fired his Uzi at Delamente. Delamente was hit, fell down, and was trying to crawl away when the gunman caught him by the hair and shot him at close range. The gunman also fired at Joel Buklas, 42, also a council member of AMPANTRIMTU who was against the PGMC FPIC proposal. Buklas was able to escape but Lovely Delamente, Veronico Delamente’s 4-year-old niece, was hit. After having shot Delamente, the gunman shouted out that he will finish all of Delamente’s siblings, before finally leaving. Delamente and Lovely were rushed to the Miranda Hospital. Delamente died after 5 minutes of attempts to revive him, while the his 4-year-old niece is still in confinement.

On the evening of the same day, around 8pm, Alexander Ceballos, 54, regional council member and district area coordinator of the National Federation of Sugar Workers (NFSW) was gunned down by two unnamed assailants near his house in Purok Tangke, Brgy. Pandanon Silos, Murcia, Negros Occidental. Ceballos was rushed to the Sanitarium Hospital in Bacolod City but was declared dead-on-arrival.

Ceballos and his family has long been the target of threats and intimidation by the Dela Cruz clan, a political clan who controls the town of Salvador Benedicto for more than 20 years. Ceballos’ involvement in organizing and mobilizing farmers to uphold and defend their rights have earned him the ire of the Dela Cruz family. In fact, on July 17, 2015, Alexander Ceballos’ son, Ariel Ceballos, survived an ambush when armed gunmen indiscriminately fired at the vehicle they were in. His fellow farmers suspected that Alexander was the original target. More recently, in a dialogue between the farmers, the provincial office of the Department of Agrarian Reform (DAR), and the Dela Cruz family represented by Nehemias Dela Cruz Jr., the latter openly threatened Alexander and Ariel Ceballos with charges to be filed in court and vowed to retrieve all the lands already distributed to the farmers from the Dela Cruz clan.

On January 28, 2017, Quilina Ceballos, wife of Alexander Ceballos, received a death threat via text message. The message stated: ‘You, your companions, and your two children’s place in the cemetery is ready.’ Quilina Ceballos received the threats while still in mourning for her husband’s death.

On a separate incident in January 25, 2017, another farmer from Negros Occidental, Wencislao Pacquiao, 48, member of the San Benito Farmers Association- Kilusang Magbubukid ng Pilipinas (KMP), was shot while doing work in the designated land cultivation area (LCA). He was with Rebeco Pabuaya, another farmer from the same organization. Around 9 in the morning, Pacquiao was approached by a gunman and was shot in the back. He was hit in the thigh and still managed to run but was pursued by the shooter and sustained more shots. Pacquiao sustained five (5) gunshot wounds. Pabuaya was also targeted but because he was working in the lower part of the LCA, he managed to escape. Pacquiao was shot at close range and was clearly targeted by the shooter.

In 2015, there was already an attempt on Pacquiao’s life. His residence was strafed by the goons of then-barangay captain Nonoy Hullesa. Nonoy Hullesa is the brother of Agustilo Hullesa, the leaser of the land that farmers from San Benito are currently cultivating. In 2014, the DAR acquired the land from Angelina Bruce Laguda through the Voluntary Offer to Sell (VOS), but the department awarded Certificate of Land Ownership Awards (CLOAs) to questionable beneficiaries. Pacquiao and several farmers filed a case against DAR for conniving with Agustilo Hullesa in distributing CLOAs to ‘dummy beneficiaries’. The land distributed to these dummy beneficiaries are now under the control of Agustilo Hullesa, who uses the land for leasing. Pacquiao led the filing of the case which seeks to award CLOAs to real farmer-beneficiaries and withdraw the lands awarded to the men of Agustilo Hullesa. The long-standing case has yet to be resolved.

You may send your communications to:

President of the Republic

Presidential Adviser on the Peace Process

Office of the Presidential Adviser on the Peace Process (OPAPP)

Please send us a copy of your email/mail/fax to the above-named government officials, to our address below:

KARAPATAN Alliance for the Advancement of People’s Rights