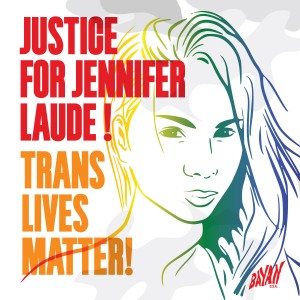 BAYAN USA joins the international community in commemorating Trans Day of Remembrance by continuing the call for justice for Jennifer Laude and all victims of transphobia and transmisogyny.  With every attack on trans and gender non-conforming communities we are reminded of the increasing violence these communities face around the world and we continue to demand justice and dignity for all victims.

This year, the number of trans murders has nearly doubled, at least 22 compared to 12 last year, and most victims were trans women and people of color, such as Amber Monroe in Detroit, Taja Gabrielle DeJesus in San Francisco, and Yazmin Vash Payne in Los Angeles.  Trans people and particular trans women of color continue to suffer from state repression and violence including harassment, lack of access to safe housing & healthcare, unjust arrests and detentions, and the militarization of their neighborhoods and families.

The case of 26-year-old Filipina, Jennifer Laude, has highlighted the consequences of militarization, transphobia, and impunity in the Philippines.  Last year, U.S. Marine, Joseph Scott Pemberton was one of 3,500 American troops participating in series of joint military combat exercises between U.S. Marines and the Armed Forces of the Philippines (AFP), which ended on Oct. 10, 2014.  On October 11th, a 26 year old Filipina transgender woman, Jennifer Laude, met Pemberton in Olongapo City at a local disco bar.  The two were last seen checking into a motel room at the Celzone Lodge, and later that same evening Laude was found dead in the bathroom half-naked, her head plunged into a toilet bowl.  The police forensic report said she had scratches and bruises, bite marks and strangulation marks on her neck. An autopsy report cited the cause of death as “asphyxia by drowning.”

Only after popular protests and public outcry was Pemberton transferred to the Armed Forces of the Philippines (AFP) Headquarters, Camp Aguinaldo (Quezon City) but he still remains directly under U.S. custody.  The US Embassy in Manila rejected the Philippine Department of Foreign Affairs’ (DFA) request to hand Pemberton over to Philippine authorities, citing the Visiting Forces Agreement.  Despite the overwhelming evidence and testimonies of Pemberton admitting to strangling Laude, the case remains open and he continues to use “trans panic” as justification for his murder of Laude. Policies such as the Visiting Forces Agreement (VFA) and Enhanced Defense Cooperation Agreement (EDCA) further exacerbate an unequal relationship between the U.S. and the Philippines, including the thousands of U.S. troops that conduct war exercises in the country only further underscores the root problem of U.S. imperialism in perpetuating violence and impunity against trans people.

We stand in solidarity with Jennifer Laude, her family, and all trans people who have been victims of violence in the U.S. and around the world.  We will continue to educate, organize, and mobilize our members, allies, and community to demand justice and self-determination for all trans victims.  We will continue to build a revolutionary movement that brings about genuine change and honors the lives of trans and gender non-conforming people.

Justice for Jennifer Laude and for All Victims of Transphobia, Militarization, and State Violence!

Junk the VFA and EDCA! US Troops Out!