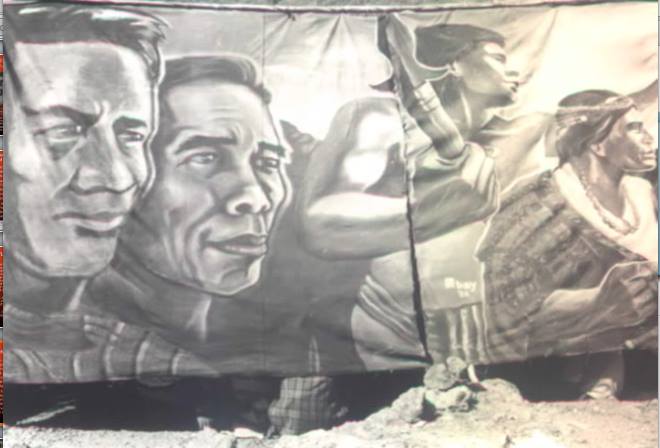 “The Kalinga people – men, women and children tore down the National Power Corporation equipment four times in their protest against the Chico Dam project. ” Artists-unknown, photo by Audrey Beltran.

This week began the annual Cordillera Day, a celebration to continue advancing the struggles of indigenous peoples in the Cordillera region in the Philippines for their rights to ancestral land and to defend their communities against imperialist plunder from multi-national corporations. The indigenous peoples’ fight for self-determination is met with numerous human rights violations committed by the Philippine government. BAYAN-USA member organizations and concerned community members join the Cordillera Peoples Alliance (CPA)’s urgent appeal for action, calling for a thorough and independent investigation on the harassment, threats, and surveillance on the human rights workers in Ifugao, Cordillera Philippines, including U.S. citizen Brandon Lee.

More than 200 letters and signatures on the online petition have been sent to Philippine government officials and local Philippine consulates in the U.S. However, the responses received thus far have further infuriated the international community, because of the government’s failure to acknowledge the problem and take action. One such response came from the Department of Justice Chairperson Hilda F. Ibuyan in a letter which stated:

“The Aquino Administration to address and to end the impression of a culture of impunity, On November 22, 2012 had issued Administrative Order No. 35 (A.O. 35) that writes in full, Creating the Inter-Agency Committee on Extra-Legal Killings, Enforced Disappearances, Torture and other Grave Violations of the Right to Life, Liberty and Security of Persons.”

The response further defines the definition of an “Extra-judicial killing” as:

iii. a media practitioner or

The DOJ proceeded to ask letter writers for “lists of victims of illegal detention and extra-judicial killings so proper investigation and evaluation shall undertake.”

“The DOJ obviously does not keep track or investigate the numerous human rights violations, especially extra-judicial killings of activists, if they themselves are asking for a list. All they need to do is read Karapatan’s reports to see the numbers, which stands at more than 200 EJK’s under B.S. Aquino,” stated Bernadette Ellorin, chairperson of BAYAN USA. “Conducting an investigation, which includes recording a list of all complaints and cases, is supposed to be the job of government, but instead they are asking the public to do their work for them! This type of response clearly reveals how the Philippine government has no interest in genuinely addressing the culture of impunity that reigns under Aquino.”

Other responses included trite, boilerplate messages from the Chairperson of the Philippine Commission for Human Rights Loretta Rosales. The responses include several forwarded e-mail threads that quickly stated that the Commission has already received numerous similar complaints and nothing more. “The sloppy manner that Chair Rosales’ office has responded to our concerns is disappointing and unacceptable. It is an insufficient response to our wave of advocacy and an attempt to brush us off with copy-pasted, disingenuously diplomatic sound bites,” stated Ellorin. “Until an actual investigation commences, we cannot guarantee that the safety of Brandon Lee and his colleagues in Ifugao will be protected by the Philippine government.”

BAYAN USA urges people to join the letter writing campaign and to apply international pressure on these government officials, on our local Philippine consulates, and the US embassy in the Philippines to conduct independent investigations on the vilification campaign put forth by Philippine military elements. Activism and defending human rights is not a crime. However, kidnapping, torture and extra-judicial killings are crimes against humanity and yet they continue under the Aquino administration.