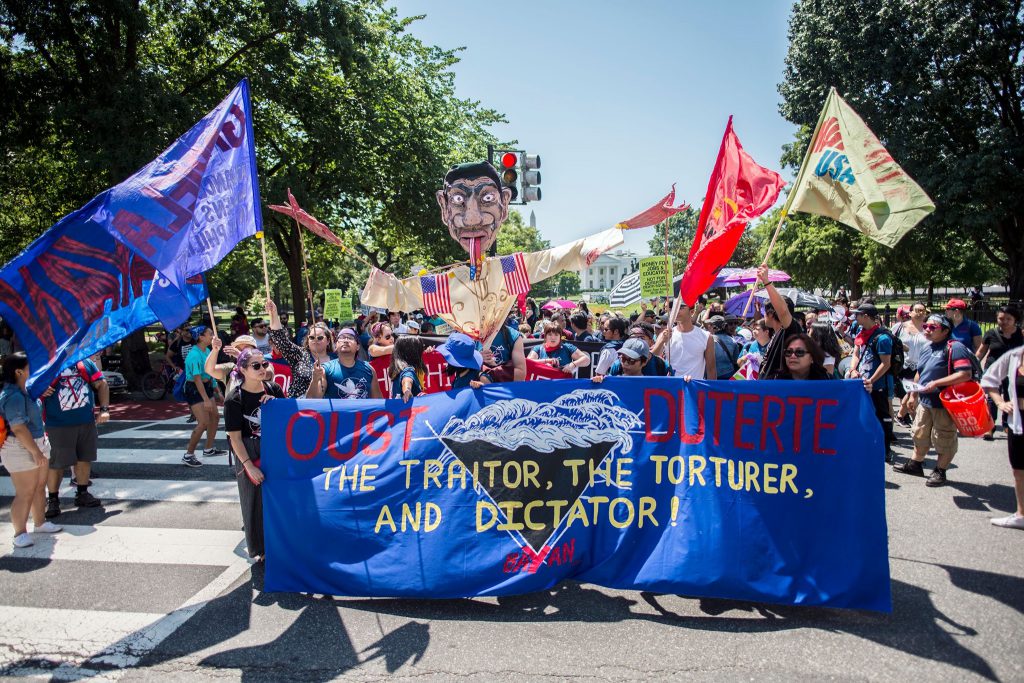 (Picture:  BAYAN USA member organizations lead a march and rally in Washington DC from the White House to the Philippine Embassy to raise awareness about Philippine President Duterte’s crimes against the Filipino people.)

On July 22, 2019, people across the United States and around the world launched widespread protests to counter Philippine President Rodrigo Duterte’s 4th State of the Nation Address.  Thousands took to the streets to condemn Duterte’s attacks on the poor and most marginalized sectors of Philippine society and his simultaneous betrayal of the country’s sovereignty to foreign imperialist powers.

The Philippine economy has plunged deeper into national debt as Dutertenomics and neoliberal policies such as the TRAIN law and rice tariffication law which have dominated the lives of everyday Filipinos left with record high inflation, loss of over 803,000 agricultural jobs, stagnating wages, and burdensome taxes that increase the wealth of foreign corporations and the ruling elite in the Philippines. These circumstances force more than 6,000 Filipinos each day to migrate abroad in search of work while at the same time facing the devaluing of their hard earned remittances sent back home to the Philippines; remittances are estimated to have reached an all-time high of $33 billion.

The recent May mid-term election resulted in destroying any last semblance of checks and balances in the Philippine government, with the majority of Senate seats being taken by Duterte loyalists, while pro-people candidates and their supporters faced aggressive harassment, vilification, and death squads.  With all branches of government under Duterte’s control, he is hellbent on railroading charter change or “Cha Cha” forward, in an effort to change the 1987 Constitution to eliminate term limits; expand foreign ownership of public utilizes, education institutions, and media outlets; and ultimately pave the way for unlimited martial law powers. 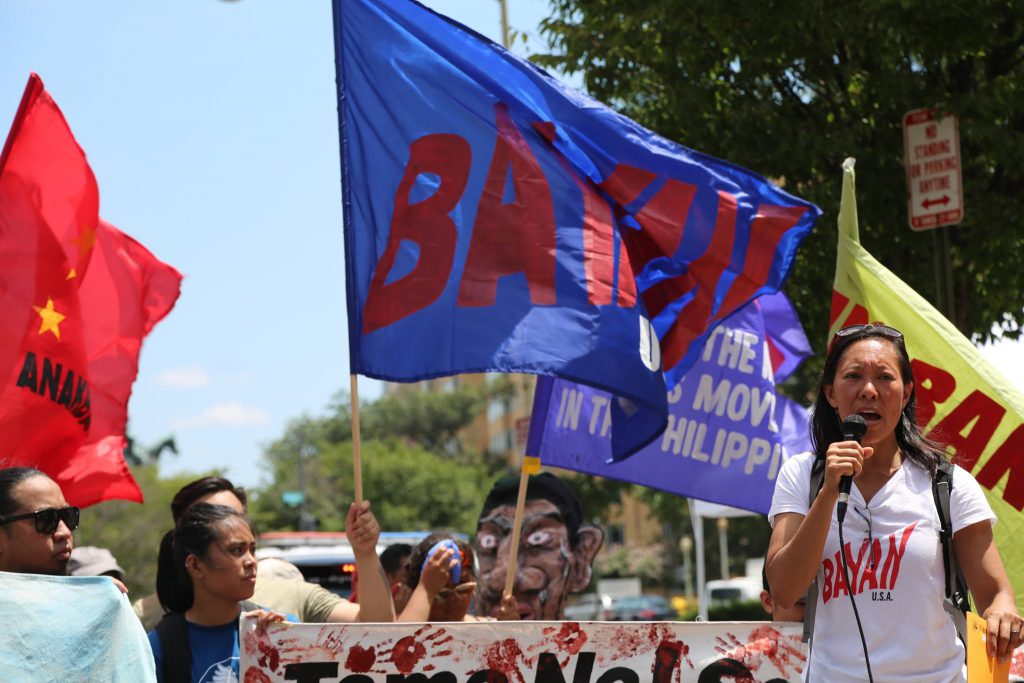 (Picture: Rhonda Ramiro, Chairperson of BAYAN USA speaking about her recent visit to the Philippines to meet displaced Lumad (indigenous people) who are fighting for their right to education and self-determination)

The human rights situation in the Philippines has become so alarming that Duterte can longer hide the crisis. The pivotal vote of the United Nations Human Rights Council (UNHRC) to launch an independent investigation of the human rights issues in the Philippines sends a message that the international community is concerned with the impunity which has reigned under Duterte. Since he came into power three years ago, there have been at least 30,000 victims of his bloody war on drugs, over 400,000 displaced since his declaration of Martial Law in Mindanao, and over 500 political prisoners in the Philippines facing trumped up charges.  While Martial Law was only officially declared in Mindanao, de facto martial law has spread throughout the archipelago as seen through the intensified militarization and state terror against farmers, trade union leaders, priests, journalists, and human rights defenders.

Overseas Filipinos are deeply enraged to hear Duterte’s excuses for allowing the Chinese government to occupy, pollute, militarize, and exploit the resource rich region that falls under the Philippines’ Exclusive Economic Zone (EEZ).  Duterte attempts to please both his imperialist masters–the Chinese government and the US government–at the expense of surrendering Philippine sovereignty and territory. On one hand he entertains President Xi Jinping’s demands in the EEZ, and on the other he calls on President Trump for more military support via the Mutual Defense Treaty (MDT), Enhanced Defense Cooperation Agreement (EDCA), and Visiting Forces Agreement (VFA).  The Filipino people deserve a democratic government that truly defends the interests and basic rights of the Filipino people. Instead, over three years of Duterte’s failures has only exposed him as a shameless traitor, dictator, and murderer that must be ousted! 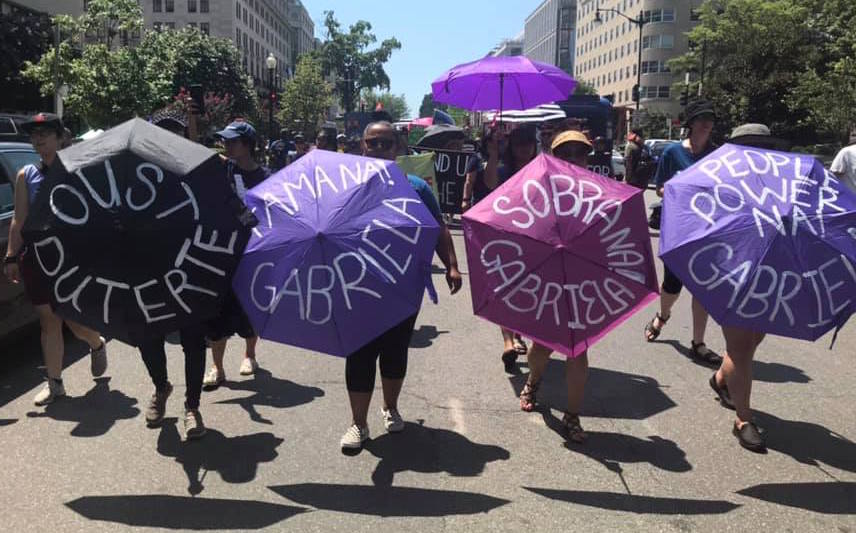 Members of GABRIELA USA march against Duterte’s macho-fascism and attacks on women and human rights defenders.

Waves of protest have launched with over 10 major cities hosting People’s State of the Nation protests across the United States.  The rising tide of dissent against Duterte’s dictatorship and clamor for national sovereignty and genuine democracy is gaining momentum.  Everyday, Duterte grows even more isolated from the people. His reign of terror must come to an end. It’s time for Duterte to be ousted! 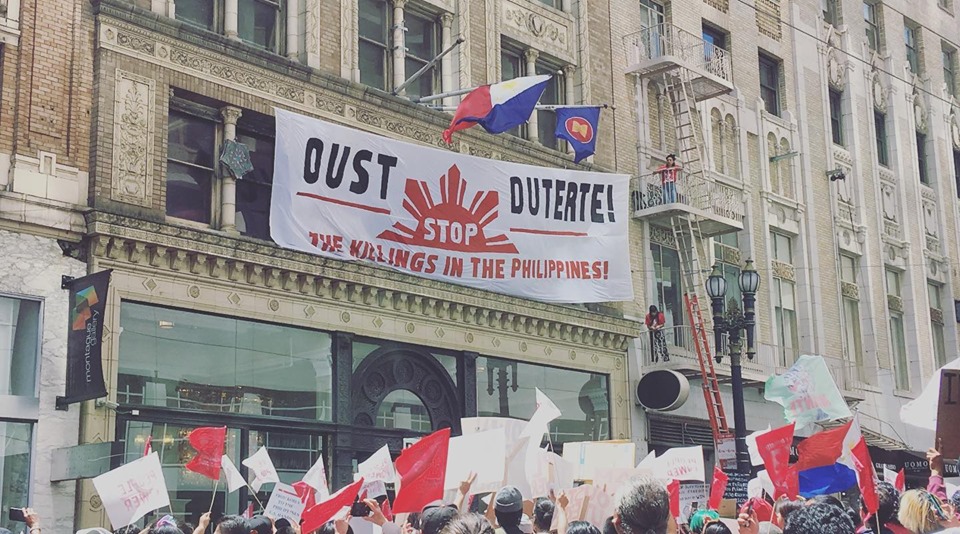 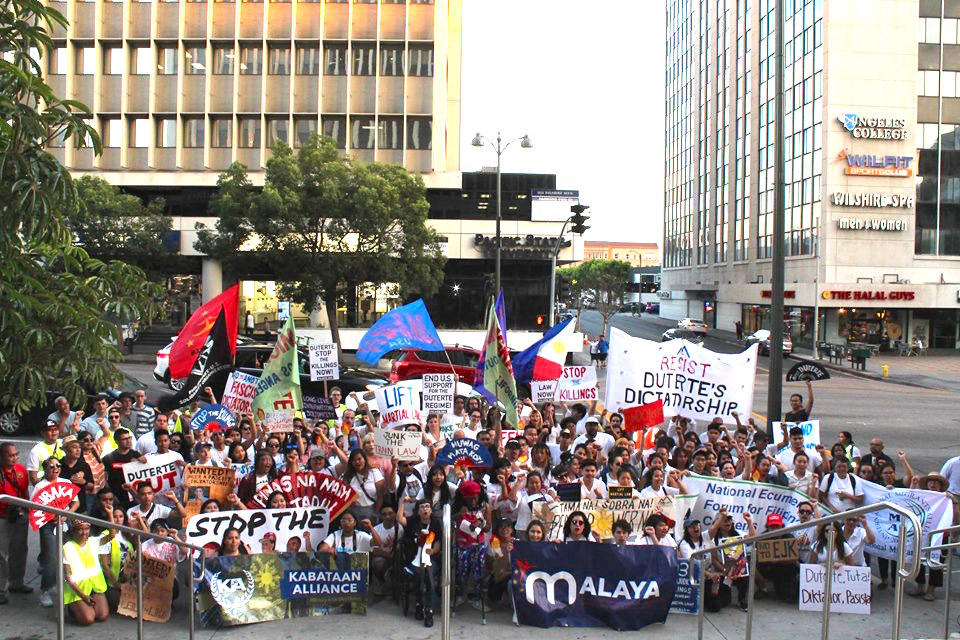 (Picture:  Over 200 gathered for the United People’s State of the Nation Rally in front of the Philippine Consulate of Los Angeles, California) 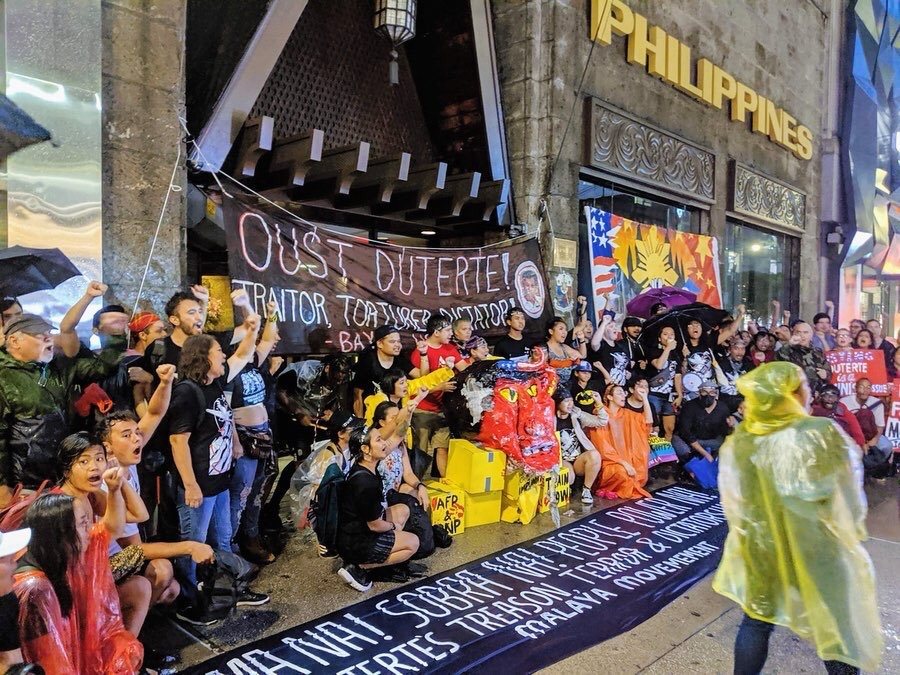 (Picture:  Over 200 rallied in the rain for the United People’s State of the Nation Protest in front of Philippine Consulate in New York, NY)