BAYAN USA joins the global day of mourning for Negros and condemns the attacks by the government on unarmed civilians.  We call on our member organizations and allies to join the Malaya Movement actions across the U.S. to condemn this violent attacks on civilians by the U.S.-Duterte regime.

Unfortunately it is no coincidence that there have been concentrated attacks by the government in Negros Oriental, reaching up to 48 extrajudicial killings this year alone. The U.S.-Duterte regime launched the Oplan Kapanatagan counterinsurgency plan earlier this year, and it is being felt nation-wide especially in conjunction with Executive Order 70- the “Whole of Nation” approach to rid the country of the “communist armed conflict.” Subsequently, the government launched Oplan Sauron, an “intensified campaign of the Armed Forces of the Philippines (AFP) and the Philippine National Police (PNP) in Negros Oriental.” In effect, the government has declared war upon civilians and unarmed organizations that they deem as “communist-terrorist groups” or “front organizations” of the CPP-NPA-NDF, shooting to kill. Bulatlat news reported “in just four days, 13 civilians have been shot dead. In just one day, July 25, seven were killed. ‘They (The PNP) were accusing the victims as NPA and now they’re claiming that the NPA is the one behind these killings,’ Judy Taguiwalo said, former Secretary of Social Welfare.”

“ ‘Whole of Nation’ means that it’s not just the Armed Forces of the Philippines (AFP) and Philippine National Police (PNP) that will be doing the dirty work of Duterte. Duterte is weaponizing the entire government bureaucracy, by including multiple departments in a National Task Force to implement this bloody crackdown,” stated Rhonda Ramiro, Chairperson of BAYAN USA.

“We’ve already seen what they’re capable of doing. A prime example is the Department of Education’s closure of 55 Lumad schools because they arbitrarily declared that these schools teach students to rebel against the government.  These sweeping accusations attempt to hide the fact that these schools were made because the government did not provide any in the rural areas of Mindanao. It is not a crime for these schools to incorporate indigenous culture and educate them on their rights to their ancestral lands–that is responsible education.”

In addition, the U.S. and the Philippines just signed an agreement to establish a counterterrorism training center in Cavite to be jointly operated by both countries, with the U.S. giving the PNP $10 million dollars in counterterrorism partnership funds.  The U.S. has provided funding to the AFP and the PNP in full knowledge of the human rights violations under the Duterte regime and his fascist violent suppression.

“Knowing the track record of the  police, funding this counterterrorism training center is basically like finding the next ‘School of the Americas’ in southeast Asia. It shows that Trump is committed to funding additional extrajudicial killings, torture, and arbitrary arrests and detention of innocent people,” stated Ramiro.

We continue to call for an end to all U.S. aid to the Philippines!

We call on an independent investigation on the attempted murder of U.S. citizen Brandon Lee!

We call on all peace loving people to take a stand against the rotten fascist U.S.-Duterte regime! 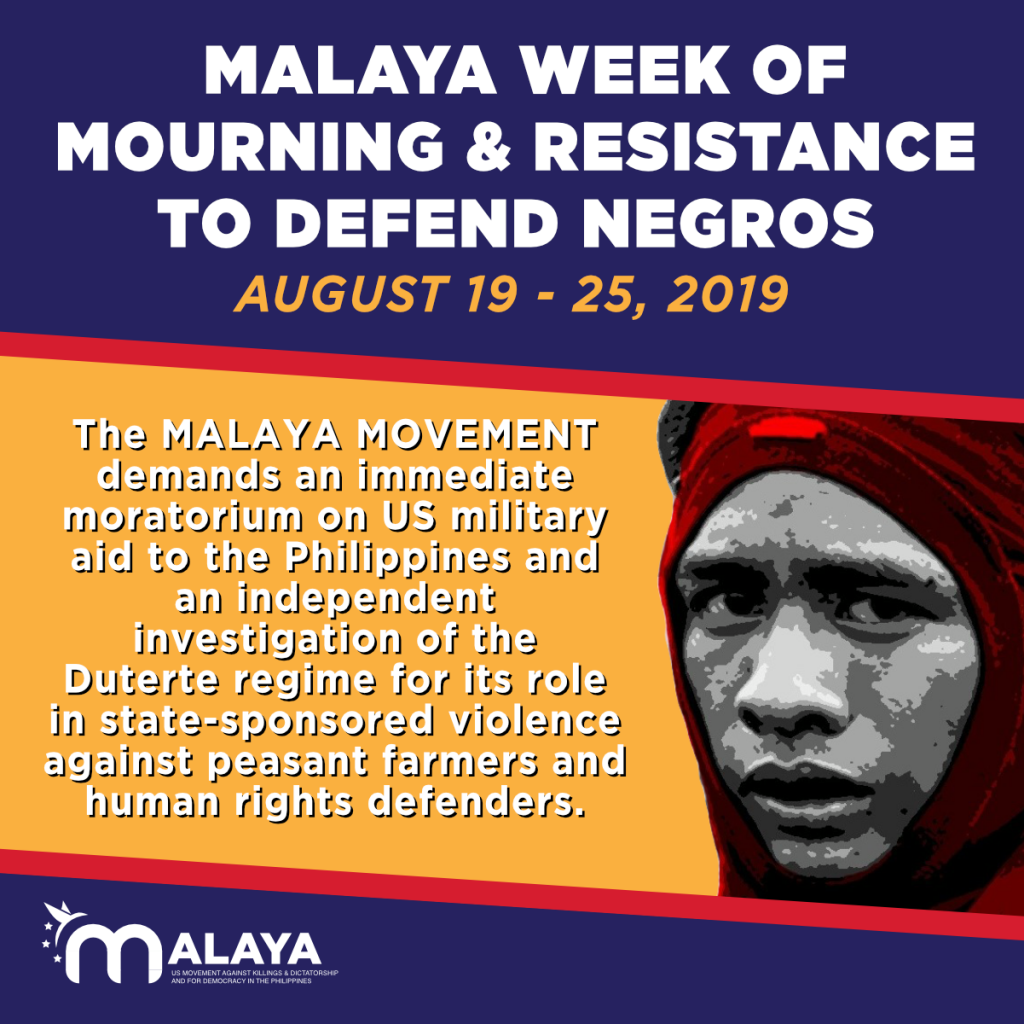