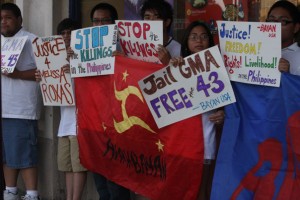 Weight Loss Plan for Aquino: Drop Arroyo’s Baggage and Adopt the 4K Program
Filipinos in the U.S. Urge Philippine President Aquino to Present Plan to Address the People’s Needs at This Year’s State of the Nation Address

BAYAN-USA will conduct actions in four cities across the United States on Monday, July 26, to mark the first annual State of the Nation Address delivered by Philippine President Benigno Simeon Aquino III. President Aquino’s term began ominously this month with the killing of five activists in less than two weeks, a troubling sign in the wake of the violence-ridden presidency of former President Gloria Macapagal Arroyo.

“We want action, not excuses, from President Aquino,” said Bernadette Ellorin, Chair of BAYAN-USA. “If President Aquino feels weighed down by the mess left by Arroyo, he can shed the former president’s legacy by abandoning Arroyo’s failed policies and implementing programs that provide decent jobs, redistribute land, safeguard national sovereignty, and end state-sponsored terror by the armed forces and paramilitary.”

The demonstrations in the U.S. will coincide with actions conducted by BAYAN in the Philippines as well as in Hong Kong, Canada, and Australia where millions of overseas Filipino workers reside. Demonstrators will express their concern about the continuing human rights violations targeting activists, as well as present the “People’s Agenda for National Survival.” The Agenda includes specific recommendations to increase the “4K’s”:

“The Filipino people suffered far too long under the deepening crisis of poverty and rampant state-sponsored violence perpetrated by the US-backed Arroyo regime. We need immediate relief, and President Aquino has the power to deliver it, if he so chooses,” stated Ellorin. “Aquino needs to stop the killings, prosecute GMA, and end the culture of impunity by conducting thorough investigations of past human rights abuses and prosecuting the abusers now.”
Сайт знакомств