Learn from the Lumad, Leo! 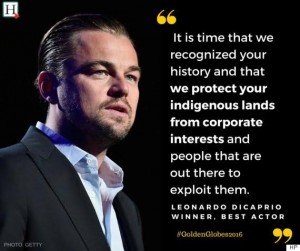 Congratulations on your achievements and recognition by being awarded the Oscar for Best Actor 2016 for your role in the film The Revenant. Thank you for taking those few minutes awardees are provided to place the spotlight not on yourself, but to what you called “the most urgent threat facing our species”: climate change, a very real and present situation that has been exacerbated by globalization and capitalist interest in the exploitation of people, all living beings and our planet Earth for profit only to be reaped by the few.

You were also awarded Best Actor for the same film at the Golden Globes 2016, at which you made a statement speaking to the indigenous communities: “It is time that we recognized your history and that we protect your indigenous lands from corporate interests and people that are out there to exploit them. It is time that we heard your voice and protect this planet for future generations.” Your words are heard globally because of your status in American society; can you imagine the ripples of impact you can have if you also pair your bold words with even bolder action? To cross over the barriers of advocacy and be part of the action you are calling for when you said, “we need to work collectively together and stop procrastinating”?

The ruthless murder of celebrated Honduran environmentalist and indigenous leader Berta Caceres in her home on March 3 is a harsh wake up call for the world– indigenous lives and all those who fight to protect the earth from corporate takeover are snuffed out.

As Filipino community organizers in the US, we are connected to the indigenous struggles in our homeland, the Philippines. The Philippines is the 5th most mineral-rich country in the world, the mining capital of Asia, and one of the most dangerous countries for environmentalists and anti-landgrabbing activists, most of whom are indigenous, in the region. Militarization and violent state repression has forced more than 63,824 people to evacuate their homes. In one incident alone more than 3,000 Lumad were forced to evacuate due to the military occupation of their community and schools. The Lumad consist of 18 ethnolinguistic tribes indigenous to and situated in the hinterlands of Mindanao in the southern Philippines. The looming Trans Pacific Partnership Agreement bodes even more violence and displacement, as multi-national corporations position themselves to take over the Lumad’s resource-rich lands for the profit of big mining, logging and agricultural businesses. The Lumad communities established their own award-winning alternative schools because there were none provided by the government. One of the best things about these schools is that they are centered on the cultural practices of the Lumad tied to the land and teach the students and communities that they have the right to protect and fight for their lands. At the end of last year, the Alternative Learning Center for Agricultural and Livelihood Development (ALCADEV), was attacked by paramilitary groups supported by the Armed Forces of the Philippines. They murdered the school’s executive director, Emerito Samcara, and two other prominent Lumad leaders.  And in a span of just 30 days from January-February this year, six more Lumad leaders and a 15-year old student were killed by paramilitary henchmen. The displaced Lumad have also been harassed at their evacuation camps, including the most recent arson fire on February 24, 2016.

You asked to hear the voices of indigenous people, and the Lumad are giving you the opportunity to hear directly from them when they travel here to the U.S. this spring. We invite you to meet them, to learn from them, and to be inspired by their courageous action to defend their life and their land. We ask you to hear their voices, to follow Marlon Brando’s footsteps and provide a global platform for the Lumad in order for them to speak for themselves about the issues they face. The US military aid to the Philippines has just been increased from $40 million to $66 million this year despite the numerous UN-documented human rights violations and impunity of the Philippine government and the paramilitary units under its control. We dread that the actions of the U.S. government will only aggravate the current militarization in the Philippines especially among the Lumad, and we need you and others to stand with the Lumad against increasing militarization and for their resistance and self-determination.

We invite you to meet with the Lumad leaders who will be in the US this April thru May, in this time of great peril for indigenous people who need your solidarity.