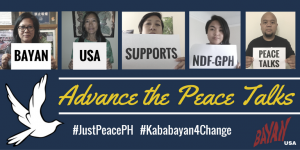 Bayan USA calls on all Filipinos and concerned friends worldwide to support the formal peace negotiations between the National Democratic Front of the Philippines (NDFP) and the Government of the Republic of the Philippines (GRP), which is set to begin its second round today, Thursday, October 6 in Oslo, Norway. Though Western media likes to shine a spotlight on President Duterte, it purposely does not cover the advancement of the peace negotiations, a major move towards resolving the root issues of the longest-running revolutionary armed conflict in Asia.

After 18 years of stalling and attempts to sabotage the peace process by the US-backed regimes of Gloria Macapagal-Arroyo and Benigno Aquino III, President Rodrigo Duterte formally resumed the peace negotiations last August. As Mayor of Davao City, he had already recognized the belligerency of the Peoples Democratic Government established by the revolutionary forces of the Communist Party of the Philippines, the New People’s Army, and National Democratic Front of the Philippines (CPP-NPA-NDFP), and now as President is continuing these relations through the peace talks.

The second round of the GRP-NDFP peace negotiations will tackle social and economic reforms, getting to the root causes of the 47-year old armed conflict in the country— poverty, landlessness, and joblessness. First introducing its proposals for substantive reforms in 1998, the NDFP has already produced its updated draft of the Comprehensive Agreement on Social and Economic Reforms (CASER), which offers concrete proposals for policies and mechanisms to carry out sustainable land reform and national industrialization. Such fundamental reforms are the keys to ensuring a Philippine economy that is able to provide jobs and livelihood for the Filipino people, the vast majority of whom are landless tillers and farmers mired in abject poverty and hardship in a country known for its vast forests and marine, agricultural and mineral wealth. Gathering lessons from the peace accord between the government of Colombia and the Revolutionary Armed Forces of Colombia (FARC) which was recently rejected by a national referendum, the proposals contained in the CASER were crafted in consultation with the masses of workers, peasants, indigenous people, and other marginalized sectors of Philippine society.

The Need for Genuine Sovereignty

Despite all the natural wealth, the Philippine economy remains backwards, pre-industrial and stunted from upward development due to its subservience to foreign economic and political dictates, corporate investments and lack of genuine sovereignty. In order for genuine land reform and national industrialization to be possible, the Philippine government must assert national sovereignty and the right of the Filipino people to chart our own direction in economic, political, and military matters. It is in this respect that BAYAN USA stands with President Duterte’s pronouncements of sovereignty and pursuing an independent foreign policy. If realized, genuine sovereignty and an independent foreign policy will lay the foundation for the development of the country, and alleviation of the Filipino people’s suffering from chronic crisis. It could reverse the anguish of the over 6,000 Filipinos forced to leave the country daily to work abroad as the only means to survive and provide for their families.

Stay Vigilant Against Destabilization and Derailment

US imperialism’s geopolitical interests in the Philippines and the Asia-Pacific region require continuing the status quo of traditional Philippine politics that forego sovereignty and uphold US corporate dictates. At present, the US government is intent on discrediting and unseating the Duterte administration, even using the backing of human rights watchdogs and the Western media to build a popular narrative against Duterte, as the latter continues to stand up vocally against US domination over the Philippines.

While we also condemn the alarming number of drug-related extra-judicial killings of alleged drug pushers under Duterte’s drug war, the human rights situation as the sole focus of the Western media and its non-coverage of the GRP-NDFP peace talks indicate media bias as a tool for destabilization and derailment of the peace process.

As the Obama and next US administration grapples with how to get rid of Duterte, it must also come to terms with US imperialism’s inability to crush the Filipino people’s revolutionary movement for national liberation, as represented by the NDFP during these peace talks.

In these crucial times, let us turn our attention to what the media is not covering about the Philippines– the 47 year old revolutionary movement for national liberation. To stand for a just and lasting peace in the Philippines is to stand for the advancement of the peace process, and more importantly with the continuing Filipino people’s struggle for revolutionary change. In the end it is the Filipino people, united in collective action and struggle, who will usher in peace and development, regardless of who is president.