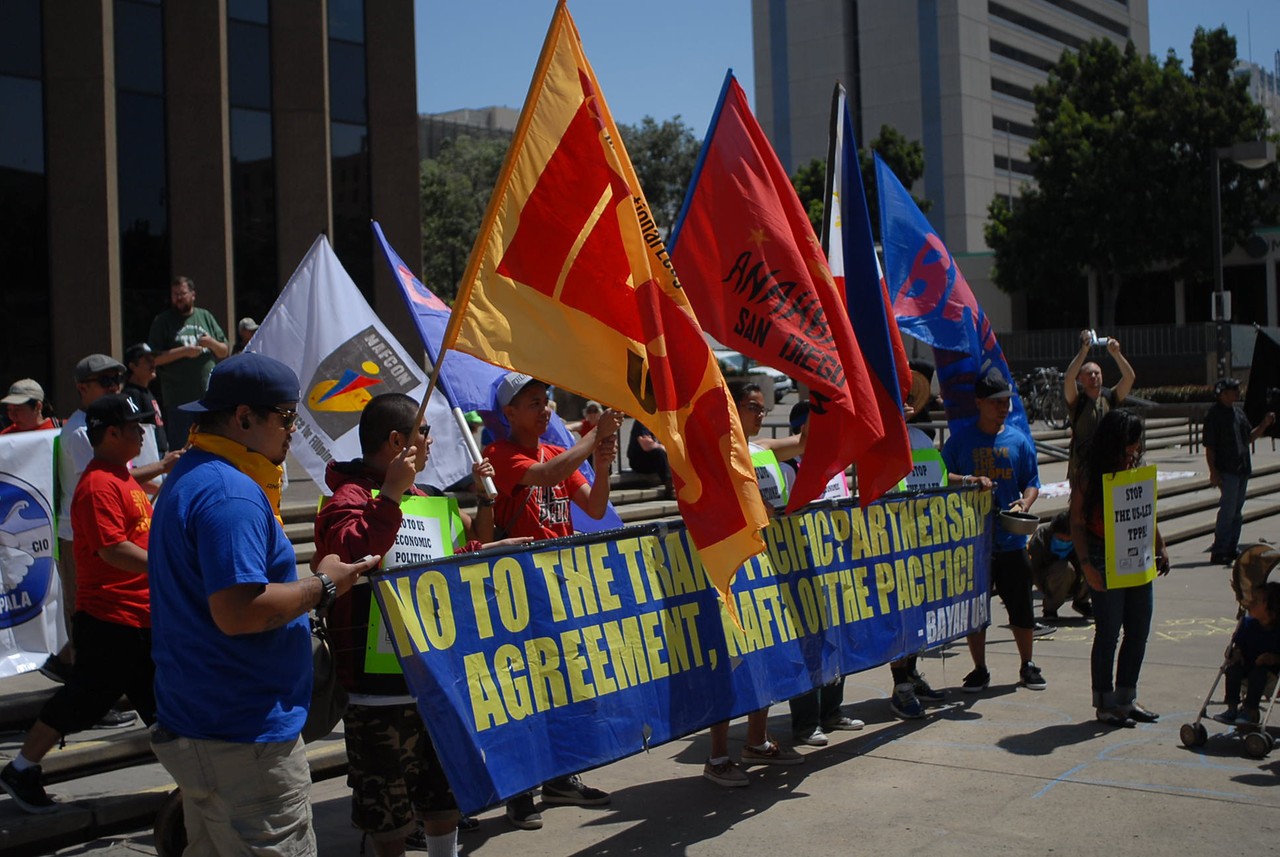 Photo taken by activists against TPPA negotiations in San Diego

In line with commemorating the 114th anniversary of the Philippine-American War, Filipino-Americans under the banner of BAYAN USA warn that the US government’s pivot in foreign economic policy towards the Asia-Pacific region and its reliance on greater US corporate control over the Philippine economy will be at the very bitter expense of Philippine national interests.

“Last week’s USPS forum in Manila and efforts to revive Cha-Cha (Charter change) in order to scrap provisions in the Philippine Constitution that restrict foreign investments in the country is an insidious push for economic neocolonialism” states Bernadette Ellorin chairperson of BAYAN USA. “Such changes would also allow for the Philippines to join the secret negotiations of the largest US free trade agreement in history– the Trans-Pacific Partnership Agreement (TPPA)– which would further aggravate the socio-economic misery of the Filipino people.”

The US-Philippine Society (USPS) is a private investment initiative composed of major Philippine and US business heads. US corporations represented include Citigroup, Chevron, Coca Cola, General Electric, JP Morgan Chase and Procter & Gamble. The group seeks to implant the US corporate agenda into the Philippine economy, including lobbying for foreign corporate control over the country’s industries, production, and natural assets.

A number of the US diplomatic leaders in the USPS also have tainted histories in the US Foreign Service, particularly ties to the CIA, and in major fraud and corruption scandals in finance.
USPS Co-Chairperson and former US Ambassador to the Philippines, John D. Negroponte, was involved in many of the CIA’s  “special operations” since the 1960’s in Vietnam, the Philippines, Central America, Africa, and more recently in Iraq. These covert operations funded by the US government enforced repressive tactics such as torture, kidnapping, rape, arming and training death squads to quell dissent and assist in the installment of US puppet regimes.

USPS Honorary Board Chair Hank Greenberg is the former CEO of the American International Group (AIG). Greenberg was the subject of numerous fraud and corruption scandals linked to the 2008 financial crash, in which he was accused of inflating AIG’s loss reserves by $500 million through fraudulent reinsurance transactions. Greenberg is also the Director of the US Council on Foreign Relations.

No Hope for Development Under the USPS Corporate Agenda and TPPA

The increased pressure to alter the Philippine Constitution’s 40% cap on foreign ownership for key industries is due to the continuous rounds of TPPA negotiations, currently between 11 countries -United States, Australia, Brunei Darussalam, Chile, Malaysia, New Zealand, Peru, Singapore, Vietnam, Canada and Mexico.  The TPPA is set out to increase US export business by exploiting the land and natural resources in these countries and taking control of the local economic markets. While there remains a cap on foreign ownership, the Philippines cannot join these negotiations.

The Philippine-based policy think tank IBON have reported that such steps towards economic liberalization are regressive in the path towards the genuine development of Philippine industries and infrastructure.

“Neoliberal free trade agreements have never developed any struggling country’s economy to become stronger. The NAFTA experience in Latin America and the Caribbean led to greater poverty, environmental destruction, joblessness, union-busting, and human rights abuses linked to big corporations,” Ellorin continued. “The proponents of  neoliberal free trade promote the deceptive line of economic development, but for whom? Development for the corporate bottom line, not for people.”

BAYAN USA is actively educating and campaigning against the TPPA and its implications in coordination with its mother alliance in the Philippines. An informational presentation on the TPPA can be found on the BAYAN USA website.