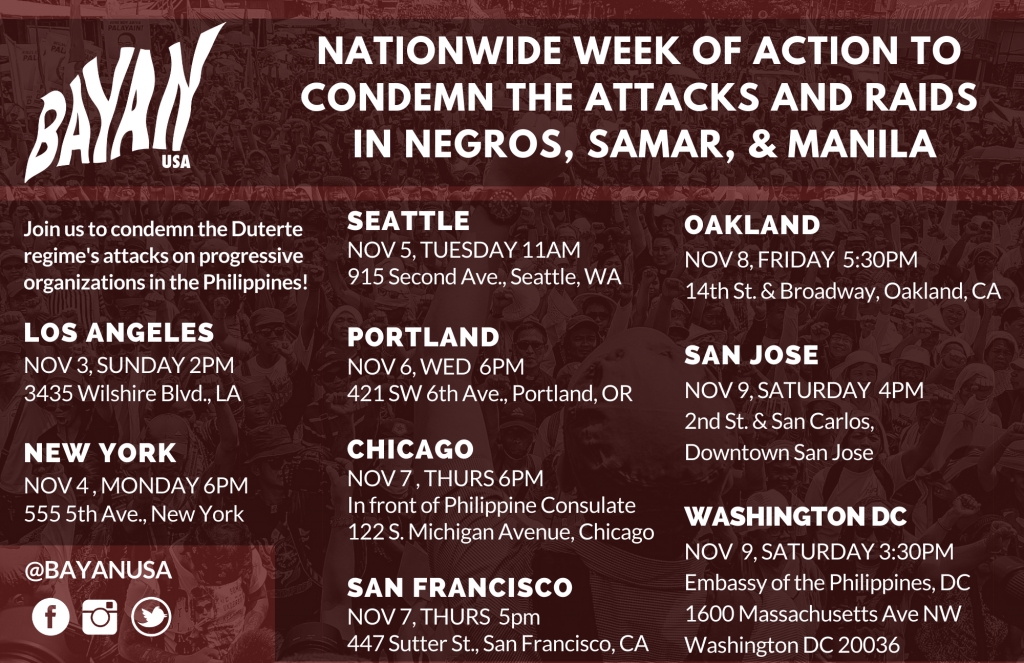 BAYAN-USA condemns the recent spate of raids of regional offices of Gabriela, BAYAN MUNA and the National Federation of Sugar Workers (NFSW) and the mass arrest of at least 60 people in Bacolod City, Negros Occidental.  Combined state forces involved in the raids include elements of the Armed Forces of the Philippines (AFP), Philippine National Police (PNP), Special Weapons and Tactics (SWAT), and Criminal Investigation and Detection Group (CIDG), who implemented this coordinated attack on progressive organizations, dubiously accused of being communist fronts.

The increased crackdown on activists and critics of the Duterte regime is part of the ongoing counterinsurgency program, Oplan Kapanatagan and Memorandum Order 32 (MO 32).  Oplan Kapanatagan, roughly translated as “Operation Plan Stability,” is the consolidated effort of the regime to use a “whole of nation” approach in implementing the program, by directing all government agencies to carry out counter-insurgency tactics that result in trampling on the civil liberties of civilians, including activists.

“Duterte is desperately resorting to mass raids and arbitrary arrests to silence dissent. These gestapo-style tactics are terrorizing communities and will only result in more global condemnation of his fascist regime,” said BAYAN-USA Chairperson Rhonda Ramiro.

Among those arrested in the raids included 40 members of Kilusang Mayo Uno (KMU)/May First Movement, Nilo Rosales of the Kilusang Mayo Uno, and Aldrin de Cerna of the Kilusang Mayo Uno, John Milton Lozande and Danny Tabura of the National Federation of Sugar Workers (NFSW), Proceso Quiatchon of the human rights group Karapatan, Anne Krueger of Paghimutad (alternative media outlet) and six minors.  In Metro Manila, as early as 5:00AM in the morning, the home of GABRIELA Metro Manila spokesperson Cora Agovida and her husband, KADAMAY (urban poor association) Metro Manila leader Michael Tan Bartolome was raided while state forces took their two children (age 2, age 10) into the custody of the Department of Social Welfare and Development (DSWD).

“It is no surprise that this raid took place in Negros, also known as the ‘Sugar Bowl’ of the nation. Negros is home to the largest and some of the most lucrative sugarcane plantations in the Philippines, yet farmers and workers in Negros face deep poverty, hunger, and extreme exploitation. Clearly, Duterte and his supporters oppose any threats to their profits, and they are cracking down on workers and progressive organizations that have formed to address these issues and fight for long-term change,” stated Ramiro.

The raids in Bacolod City are just the latest in a long string of military counterinsurgency operations, which are becoming more frequent. Last November, Memorandum Order 32 (MO 32) was issued by Duterte to deploy more AFP and PNP troops to Negros, Bicol, and Samar to fully implement its state terror program to “suppress lawless violence and acts of terror. ” On October 26, the AFP Central Command and 8th Infintry Division conducted “surgical air strikes” dropping 500 pounds worth of bombs on Northern Samar communities in an attempt to wipe out the New People’s Army (NPA) in the region. In reality, the result has been de-facto martial law conditions throughout the country, with farmers and families afraid to leave their homes in fear of being tagged as NPA, separated from their land and livelihood, and vulnerable to harassment, surveillance, illegal arrests, and extrajudicial killings at the hands of state forces. Under the Duterte regime, there have been at least 87 politically-motivated killings of unarmed civilians

“Duterte’s dirty tricks will never silence the growing movement for change in the Philippines. His fascist tactics will simply fuel the fire of the movement building for his ouster,” said Ramiro. “At the same time, we also hold the U.S. government accountable for Duterte’s raids, illegal arrests and extrajudicial killings, because the U.S. continues to fund, equip and collaborate with Duterte’s death squads. We condemn and demand an end to all support for the Duterte regime.”

BAYAN-USA calls on all of our member organizations and allies to stand with Negros and Samar, and launch mass protests to condemn the state terror committed by the Duterte regime.  We demand an end to Duterte’s war economy and counterinsurgency tactics funded and guided by U.S. aid to crackdown on activists in the Philippines to the tune of $193.5 million last year alone.  We stand united as part of the national democratic movement fighting for national independence, true democracy, genuine agrarian land reform, and national industries that would provide living wage jobs, a sustainable economy, and improve the lives of majority of the population composed of landless peasants and workers.  We will continue to struggle alongside our kababayan in the Philippines to expose and oppose state fascism and dictatorship, and fight for our motherland to be free!

BAYAN-USA is an alliance of 29 progressive Filipino organizations in the U.S. representing students, scholars, women, workers, artists, and youth. As the first and largest international chapter of Bagong Alyansang Makabayan (BAYAN-Philippines), BAYAN-USA serves as an information bureau for the national democratic movement of the Philippines and as a center for educating, organizing, and mobilizing anti-imperialist and progressive Filipinos in the U.S. For more information, visit www.bayanusa.org