Join the People’s State of the Nation 2017

Duterte’s Unfulfilled Promises and the People’s Fight for Genuine Change! 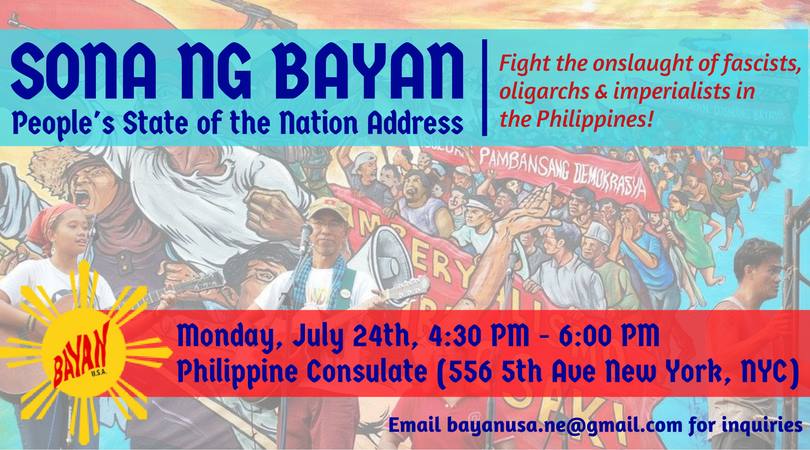 On July 24, 2017, President Rodrigo Duterte will deliver his second State of the Nation Address.  Duterte’s election just over one year ago demonstrated a clear desire of the Filipino people for genuine change in the Philippines and a fundamental departure from previous regimes. Since then, grassroots organizations in the Philippines, BAYAN-USA and filipinos worldwide have raised our most urgent concerns with the President in various venues, including street protests, dialogues with the administration, hosting the People’s Summit, and submitting the People’s Agenda for Change to the President on his inauguration day.

We have voiced our condemnation of the drug war and the militarization of communities. We have raised the need for land reform, an end to labor contractualization, a national minimum wage, pursuing the peace process, the release of all political prisoners, the creation of jobs through national industrialization, an end to US military intervention, the expansion of social services and support for the progressives in the cabinet. President Duterte will deliver his second State of the Nation Address following a year of his tragic and misguided war on drugs, and amid the crisis in Marawi and Martial Law in Mindanao, continuing US intervention, and the worsening economic condition of the people.

After one year, what has really changed?

People’s State of the Nation Address actions will be held around the world, including in the United States, to call attention to the people’s continuing demands and hold Duterte accountable for his unfulfilled promises. We call on President Duterte to step away from the status quo of pro-imperialist, corrupt trapo politics that he has criticized in the past. It’s time to genuinely develop the Philippine economy to enable all of the Filipino people to benefit from our natural wealth and skilled labor force, and so that mothers and fathers don’t have to choose between raising their children or working abroad just to feed them. It’s time to ensure a just and lasting peace by charting an independent foreign policy and building a self-reliant and sovereign Philippines.

Join BAYAN USA and friends at these People’s SONA events across the U.S. For more updates, please visit bayanusa.org :

March to the Philippine Consulate

Vigil for Just & Lasting Peace in the Philippines