1. Advancing the Peace Talks with the National Democratic Front of the Philippines. 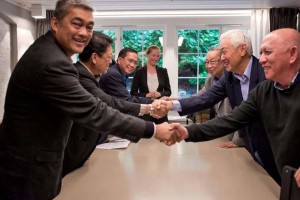 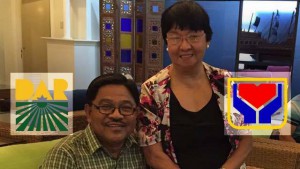 3. Demonstrating openness to listening to the masses: After two decades of welded-shut gates, the Department of Agrarian Reform opens its doors. Duterte signed the historic Executive Order on Freedom of Information. The Left was allowed to hold the People’s SONA close to the Batasang Pambansa without police harassment. 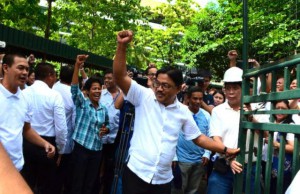 4. Enforcing mining environmental protection standards by shutting down a small mining firm for violations. Duterte also wants to review all mining contracts through Gina Lopez, Secretary of the Department of Environment and Natural Resources. 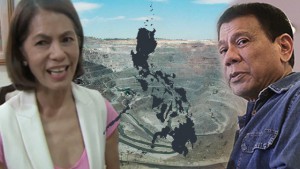 5. Before and after he was elected President, Duterte inspired hope of the Filipino people for genuine change.

This year’s People’s State of the Nation Address (SONA) organized by BAYAN in the Philippines featured murals depicting the people’s vision for the social and economic justice and peace that we want, rather than an effigy of what needs to be overthrown. With vigilant optimism, tens of thousands of people took to the streets to present the 15-Point People’s Agenda for Change, and to call for the immediate resumption of the peace talks between the Government of the Philippines (GPH) and the National Democratic Front (NDF), the release of all political prisoners, and an end to militarization of the countryside and counter-insurgency program Oplan Bayanihan.

President Duterte was elected into office because the Filipino people truly desired a massive shift from the decades upon decades of rule by thoroughly corrupt political dynasties. His popularity was especially felt amongst the poor and working class Filipinos, who bear the brunt of the impact of the widening gap between the wealthy elite and the poor and who have been forced to leave the country in droves to work abroad in order to survive.

We urge President Duterte to continue walking the progressive path towards genuine change in the Philippines. We urge his administration to end the rash of extra-judicial drug-related killings and to investigate the big-time drug dealers and their counterparts in the government and multinational corporations who exploit and abuse the people, instead of “taking out” smaller drug dealers and users, many of whom come from poor families.

“There is so much to be done, and one president alone will never achieve the fundamental change the Filipino people desire,” stated Bernadette Ellorin, chairperson of BAYAN USA. “It is the mass movement that will take the lead in advancing towards a better Philippine society. We’re off to a good start with concrete plans to resume the peace talks between the GPH and the NDF, and the signing of the Executive Order on Freedom of Information. Now, we look forward to working with the new Duterte Administration most immediately for the release of all political prisoners, and to implement the social and economic reforms that will begin to address the root causes of the country’s widespread poverty, landlessness and unemployment.”

BAYAN USA is pushing forward the 15-Point People’s Agenda created by the People’s Summit participants and delivered in Malacanang during President Duterte’s inauguration. We urge President Duterte to take action on the following six major priorities during his first 100 days in office: