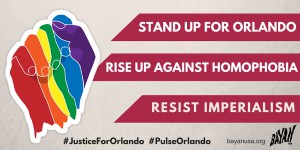 Stand Up for Orlando, Rise Up Against Homophobia, Resist Imperialism

BAYAN USA extends our heartfelt condolences to all the victims and loved ones of last week’s shooting at Pulse Nightclub in Orlando, Florida, one of the worst mass shootings in U.S. recent history.  This act of violence resulted in the murder of at least 49 and wounded 53.  Most of the victims were youth and queer-identified people of color, Black, Puerto Rican, Latino, including some undocumented immigrants.  We stand in solidarity with the victims, survivors, and the international lesbian, gay, bisexual, transgender, queer, intersex, gender non-conforming (LGBTQIGNC) community and we will continue to call for justice, an end to hate violence, and end to U.S. imperialism, the root of the violence against LGBTQIGNC communities.

The main perpetrator of violence is U.S. imperialism and its use of militarization, criminalization, and discrimination as tools to further police, subjugate and marginalize LGBTQIGNC communities within the US and abroad.  “The U.S. perpetuates an imperialist and capitalist culture of violence against the poor, people of color, immigrants, LGBTQIGNC, and Muslim communities.”  said Jessica Antonio, Secretary General of BAYAN USA.  She continued, “When mass shootings happen in the U.S., the government’s response is not to protect the most oppressed, not to enforce gun laws, but rather incite more hate and violence using the media. In this case, targeting the Muslim and migrant communities while justifying the U.S. imperialist wars.”  Corporate media outlets have continued to spread propaganda scapegoating Muslims and dangerously perpetuating Islamophobia.

“When mass shootings happen in the U.S., the government’s response is not to protect the most oppressed, not to enforce gun laws, but rather incite more hate and violence using the media. In this case, targeting the Muslim and migrant communities while justifying the U.S. imperialist wars.”

Antonio explained, “This tragedy is a also a reminder that the daily experience of LGBTQIGNC communities facing harassment and violence is directly shaped by the U.S. government’s anti-people policies.”  Even after gay marriage was legalized, anti-LGBTQ hate crimes have been on the rise and more anti-LGBTQ laws were passed this year than any year in recent history. Of the 175+ anti-LGBTQ laws passed this year in the U.S., at least 44 of them are aimed at discriminating transgender communities.  A recent report by the National Anti-Violence Project cites that more than half of the 24 LGBTQ homicide victims in the U.S. in 2015 were trans women of color.  In the Philippines, progressive youth, women, and LGBTQ organizations having been pushing for an anti-hate crime law, particularly citing the recent deaths of Ashley Reilley, a 23 year old transgender Filipina found murdered and stuffed into a suitcase, and Jennifer Laude, a 26 year old transgender Filipina strangled to death by U.S. Marine Joseph Scott Pemberton, who received U.S. protection due to the Visiting Forces Agreement and a reduced sentence despite being found guilty of the crime.

BAYAN USA calls on all of its members organizations, allies, and the Filipino community to stand up for the LGBTQIGNC community rising up for genuine change and fighting for liberation.  We urge our members, allies and friends to take concrete steps to work together by educating, organizing, and mobilizing with the LGBTQIGNC community.  Participate in local Pride marches across the country such as Chicago Pride (June 18-19), San Francisco & Seattle (June 25-26), and San Diego (July 15-17).  Only through unity, collective action, and solidarity can we win freedom for the most oppressed and all LGBTQIGNC communities facing state violence, poverty, homophobia, and transphobia.

Justice for Victims of the Orlando Shooting!

BAYAN USA is an alliance of 20 progressive Filipino organizations in the U.S. representing students, scholars, women, workers, artists, and youth. As the first and largest international chapter of Bagong Alyansang Makabayan (BAYAN Philippines), BAYAN USA serves as an information bureau for the national democratic movement of the Philippines and as a center for educating, organizing, and mobilizing anti-imperialist and progressive Filipinos in the U.S.  For more information, visit www.bayanusa.org.